While I was sorry to hear about AA Gill, Rick Parfitt and George Michael shuffling off the mortal coil, it’s silly to associate sadness with importance. I’m sad that women don’t want to lick me all over, but their lack of discrimination in this regard is highly unlikely to change the world. It is particularly apparent on Twitter, however, that a tiny minority of the UK population are out to use tiny minority issues to make the macro world flock to their endless causes. The good news is, it has not a snowball in Hell’s chance of success. The bad news is, downtrodden majorities will lose out because of this.

He changed the way we think about gender politics and was a major force on the geopolitical stage, putting the GB into LGBT in lavatories across the civilised world. How could any Socialist forget the way he relaunched Christmas as an ecumenical atheist winter festival with his profoundly anthemic single, ‘Last Christmas I gave you my heart/but the very next day you gave it away’. If someone gives you a heart and you already have one, don’t be a greedy Tory….give it away to somebody who needs it, eg George Michael who died of heart failure and, as a bisexual worker entertainment Kommissar, was an example to all of us in the broad-based activism space. Amen.

All Fox LGBT activists and HopeNotHaters should be out there today supporting the principle of transgender operations for foxes free on the RSPCA and capital punishment for all Tory scumbigots in red jackets. Remember! It’s hate foxhunters or there’s no hope for foxes to continue their natural desire to kill every chicken in the coop and then eat just the one, later moving into our towns to avoid the overcrowding and chuck the garbage about.

Yes, not only is it terrifically traditional like burning witches and stoning women for showing an ankle, it’s also a sport for anyone with a genuine sense of social responsibility because foxes are vermin I tell you and simply must be culled along with old people and disabled ex-servicemen especially Gurkhas which are like Burkhas in that they both end in urkhas. Only we who understand the natural wildlife balance of Britain’s fast-disappearing countryside really grasp that we must let a hundred dogs dismember a live animal and then pick up its entrails to smear on the face of our children and what about the dogs do these townies have any idea at all how many jobs would be lost if we keep this ban that has so far caused three peasant families living in tied cottages to be thrown out penniless and die in a ditch this whole debate is even worse than bally Brexit….. 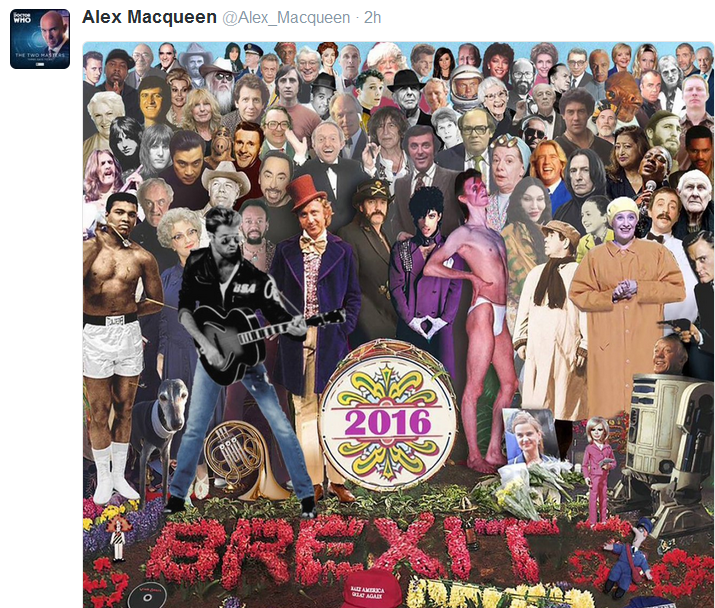 Just look at all these pointlessly wasted lives lost in one year thanks to the stress of Brexit….Napoleon Solo, Jimmy Young, Cliff Michemore, Fidel Castro, Mrs Merton, Hilda Ogden, Leonard Cohen, Lady Penelope, a French Horn and Dan Dare all cut down in their prime thanks to the selfish, Little Englander, racist Faragista fascist Empire loyalist hordes of barbarian Hard Right 52%. Well we weren’t ready and they told big fat fibs about how the EU didn’t invent the NHS when it’s a well-known fact that of course they did so we want a second go but this time with votes for 14 year olds and all the dead people who would obviously have voted to remain.

And finally, for all those of us in this wonderful global shift in favour of Progressive ideas, we think this one sums up that all the really good and nice people voted to Remain in the EU because the EU is part of the Global Village and as that’s obviously the future I mean per-leeeze, you would have to be some kind of fox-hunting, badger-gassing UKIP-voting Jo Cox murderer not to feel total sympathy with something as wholesome as young women working with the UN to end the appalling planetary crime of female genital mutilation which is very different to, and only passingly associated with, the Islamic religion of peaceful decapitation Alluah Aqbar humbug.

Meanwhile back on Earth, liberal democracy is under threat, the global fiscal debt is unsustainable, the UK economy is a joke, the NHS is starving to death, the Government has embezzled 3.2 million State pensions, our manufacturing sector’s job communities have nearly disappeared and the EU Lusitania is about to sink in a sort of blowing up kind of way.

Recently at The Slog: How to eradicate Jihadism