How quickly time flies when you’re enjoying yourself: once again it is time to venture into the acid attack of Twitter, there to gaze upon gender experiments among the Rolling Stones, the Owen Jones dialectical analysis of newt ownership, Boris Johnson befriending Buenos Aires, Jeremy Corbyn’s thoughts on Deathophobia, and Jeremy Hunt’s big non-monetary thank you to NHS nurses.

In the furtherance of compiling this piece tonight, I went to Twitter and received this welcome:

This notification has everything. First up, it thinks that “something” as a noun to attach to “technically wrong” is the sort of explanatory update to put me at ease. The “something” could be the outbreak of World War III, Planet Earth suddenly moving out of its sun orbit, the US filing for bankruptcy, a full-scale ISIS shoot-to-kill invasion of Twitter HQ or a military Putsch in Washington.

It’s up there with “Something’s not right” (Gmail) and “A major error has occurred” (Microsoft).

Second, it thanks me for noticing that a blue panel popped up to tell me that Something is technically wrong. Do I really deserve a thank you for using my primary senses and ability to read? In these days of standards so low you have to be an ant into limbo-dancing to creep under them, perhaps I do. It’s hard to tell: but something in my left brain tells me this is akin to that applause you hear on US sitcoms when celebrity guests manage to walk onto the set without tripping over their egos.

Nevertheless, Twitter said it was going to ‘fix it up’ – albeit with no guidance as to whether the fixing thing would be upside down or right way round. So the first tweet I came across left me in some doubt: 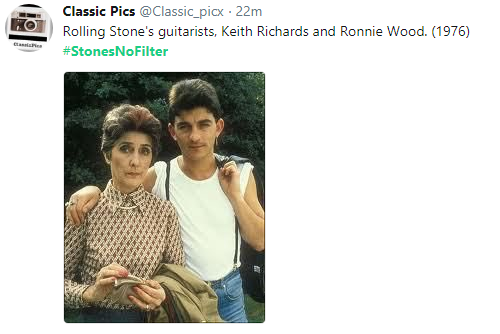 Now I’m happy to accept that Keef has gone all tranny of late and Ron Wood has been rejuvenated by monkey-gland treatment; but this duo looks suspiciously like Dot and her ne’er do well son to me.

It’s hard to post a Twattering Classes piece without at least a dash of Owen Jones, so here’s one of his latest radical solidarity retweets:

Um, Cuddly Ken has already resigned from the Labour Party. I humbly beg to doubt that a gag about him having a pet newt called Adolf is a “serious falsehood”. Those of us with sense-of-humour antennae didn’t do anything beyond giggle. Jon Craig is clearly a knob who probably thinks Jeremy Corbyn has a pet mouse as a result of his conjugal relations with a London Zoo elephant called Evita. As for Owen himself, yes, he is old fashioned: his belief system makes him the Labour equivalent of Jacob Rees-Mogg.

Off the other end of the sanity spectrum, Boris Johnson had this to say about his trip to Argentina:

This my well be true, but it will require a degree of creativity on BoJo’s part. To repay Britain’s national debt, for example, Boris the Spider could sell the Falkland Islands to Buenos Aires for £2.3 trillion. This is the same national debt that Gideon Nobsore told us we were paying off, when in fact it was doubling under his stewardship.

However, something tells me Argentina might be a bit short of the readies.

Time now to turn to the tweets of Jeremy Corbyn, our man on the spot with the compulsion to demonstrate his fluent grasp of Virtue Morse Code. Jezzer is an atheist, but he had this to say about the Manchester atrocity:

Any connection made by scumfascistbigots between the 22 deaths and Britain’s appeasement of mad Islamics is of course prima facie evidence of Islamophobia, and will result in the incarceration of such insane conspiracy theorists once the triumph of Socialist Certainty comes to pass by 2022 at the very latest.

But Jeremy of Galilee wishes to make it clear that everyone – be their station in life high or low – will be free to express clichéd claptrap free from the fascist interference of regressive forces once the Sovyet Paradise has been established:

Yes indeed, his thoughts are with those who are blown to bits, beheaded, stabbed and shot under the enlightened Mayorship of Sadiq Khan. Repeat after me: “Yes we Khan!”

But let us end tonight with a tweet from the maestro when it comes to shit-dodging, fake emotional up-chucking hypocrisy in social media. I could not, of course, be referring to anyone but that other Jeremy….he of the hail fellow well met surname greeting, “See you next Tuesday”:

Secretary Hunt is just gagging to pay tribute to NHS nurses….up to but not including paying them what they’re worth. Such a calculation would not be (I admit) an easy one to make. But in a Benthamite culture recognising genuine sacrifice for the good of the greatest number, I would suggest that the exchange rate re this one might be 1 Nurse = 20,000 bankers and other assorted Bourse traders.

However, I am just another fluffy non-violent extremist, and so you would all do well to ignore me.