Britain didn’t give up the empire in order to become a colony.

For once, Dominic Raab has made a quintessential point in his response to Michel Barnier’s soi-disant “backstop” proposal in relation to the Anglo-Irish border. While overall most of Raab’s speech was the usual blather about “compromise”, at one point he says Barnier’s empty idea would “fail to respect the constitutional integrity of the UK”.

The Irish border issue itself is nothing more or less than an immovable object triumphantly discovered by Brussels eighteen months ago, and a day in the sun for Irish Taoiseach Leo Varadker….from which (I am told) the Dublin Government will secretly benefit. My genetic roots lie in Ireland (among other places) so I am sorry if this sounds glib, but reality quite often sounds banal – perhaps that’s why so many people prefer the fantasy lands of trickle-down wealth and a ‘democratic’ European Union.

At best, the chances of a return to The Troubles as the result of border status quo are negligible. Varadker is assigning the “success” of Blair’s Easter Agreement with Dublin to the “soft” border, which is dubious in and of itself: but also nothing at all to do with Northern Ireland’s political failure since.

The border itself is the dividing line between two sovereign nations. In the round, sovereignty is the tricky bit that the UK Remaindeer, Brussels and NATO can’t (or won’t) get its collective head around on the Brexit question. And that’s what makes Raab’s point so welcome…..albeit long overdue.

The obvious line to take is “nothing changes – take it or leave it”. The point is, somebody has to blink. If May does this in her speech in Salzburg tonight, she is going to find herself in deep trouble very quickly. She’ll also have to speak very quickly, because our EU friends are giving her……ten minutes. Blink and you’ll miss it, so to speak.

But then, she’s going to be in deep trouble anyway….whether that’s by this weekend coming, or a fudged Brexit put before the two Parliaments some time during the last three months of 2018.

In a whirling dervish of awkward panic (pretty much her default mode at all times if we’re being honest here) the Prime Minister has taken to social media in a bid to “explain” the Chequers Diktat, as if it might have been in some way distorted or complicated by its opponents. She starts the task at the bottom of a 1 in 2 gradient simply because, outside of her own clan, everybody is a Chequers opponent. The thing having been largely designed by Whitehall with some gratuitous input from Frau Doktor Merkel, this isn’t surprising.

She does however need to explain it clearly for one reason alone: the vast majority of Brits either don’t feel strongly either way, lost interest in the saga some time halfway through 2017, or are not interested in what Chequers says because they are Remainiacs of the Blair/Clegg/ Adonis persuasion. That said, the White Paper has been around for some time (better late than never) and the following page capture illustrates via red underlines – even if there aren’t red lines as such any more – where the problems lie for those like me in favour of Full Sovereign Brexit (FSB): 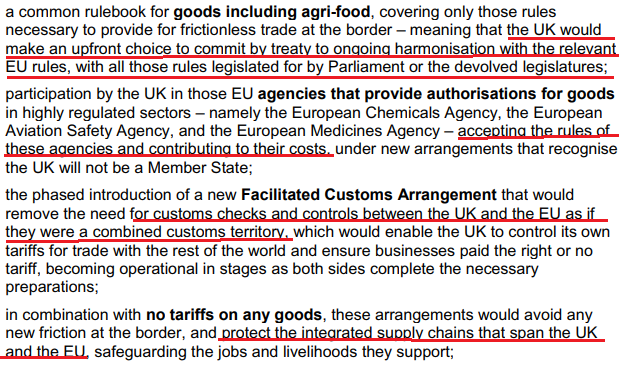 The Chequers approach fails the FSB test on the following clear bases:

This last observation is central: both in the UK and beyond, there is a determined, globalist minority Establishment of malignant mammon-aristo ideologues and gofers whose sole aim isn’t Soft Brexit at all: it is remaining exactly as we are – tied to a corrupt fiscal millstone with military ambitions….and no respect whatsoever for liberal democracy.

Tasteless as this closing analogy may appear when applied to Theresa May, it has to be written down and heeded. She is the ultimate, sad barren woman carrying a foetus around everywhere she goes in a bid to prove it is alive, not stillborn.

Postscript: another example of how the linguistics of spin turn a democratic nationalist into Adolf Hitler:

If Orban is “far-Right”, then God alone knows what that makes Emmanuel Macron….far worse?