I’m grateful to a threader at The Slog for reminding me that the media censorship between the UK and the EU at the moment is a two-way street….or barricade, depending on your viewpoint. He’s right: all élites are feeding propaganda to their electorates.

But at the same time, there only appears to be a war between peoples here. As Kate Hoey has said from the outset, the real conflict is between the various electorates on the one side, and the Alt State élites on the other.

Here’s a quick pic of the last week or so’s headlines at La Dépeche: 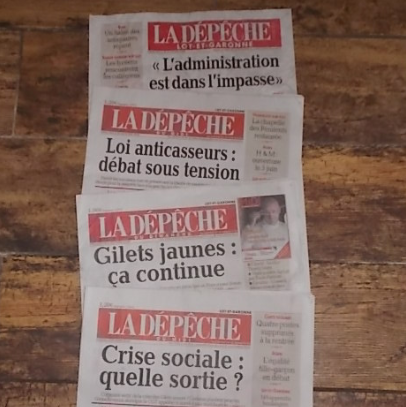 As you can see, Macrony le Wunderkind is not doing terribly well at the minute. The Gilets Jaunes have exacerbated his already parlous spending deficit to the point where it now sits at an embarrassing 35%. His Prime Minister wants to bring in repressive laws that the National Assembly isn’t keen on. The Jaunes just keep on becoming more popular….so much so, the despicable Antifa has now targeted them as suitable material for a good duffing-up – in its normal Sturm Abteilung manner. Hence the headline at the bottom there: ‘Where is the way out of this social crisis?’

France is divided at the moment by its view of one man – the President – and what he represents – viz, the MIC-banking-superbloc he represents….and which, pretty obviously, got him elected. He was foisted upon the French nation by banking and corporate plus Brussels-am-Berlin funding. The caper was designed to stop the rise of populism by getting a faux-populist puppet into the Elysée.

Some among you, I’m sure, would view the above paragraph as a series of wild assertions and allegations. They aren’t wild, unsupported or alleged: they’re facts. At an early stage in the campaign, several MSM titles (most notably Mediapart) ran well-evidenced stories showing beyond doubt that Macron’s campaign funds came 70% from the corporate sector, and 30% ‘from other places carefully hidden by accountancy’. No press baron has gone near the other 30% as yet, but French cognoscenti touch their noses as they point to Frankfurt.

The Conservative (Republican) candidate was destroyed by allegations of misconduct blown out of all proportion by the pro-Macron media. This gave Wonderboy an easy win in the second round against Marine Le Pen. Only 2 in 5 French voters took part in that decider: the rest abstained.

The French electorate splits out between those middle-aged, more upmarket urban citadins who always knew what was behind Emmanuel Macron (and are all for his ‘reforms’) on the one hand, and the odd mixture of older liberals, young Kennedyesque idealists and workers/agrarians on the other who either feel angry at how they were duped – and/or see him as just another Anglo-Saxoniste marionette imposed by the EU-supporting globalist set. Macron’s problem is that the latter “Resistance” – and the GJs in particular – have the support of the majority.

I observe the UK media online or on the TV every day. I doubt if more than one adult in 40 has any idea what’s going on in France at the moment. I suspect the same number (or fewer) would grasp how close Italy is to collapse and then confrontation.

But as Slog threader A Kearsley Lad points out, the UK sees virtually nothing analysing what the EU citizen’s view is of Brexit. Here too, massive censorship (largely self-imposed) applies….especially in France and Germany.

Firstly and most obviously, there is no average EU citizen. The EC would like that myth to exist, because it might suggest that there is some scientific basis in fact “for this great project of ours”.

The Italians and Greeks are reasonably interested in Brexit, about which they learn online – as do the Poles, Hungarians and Slovaks. Among the Dutch, I detect little or no interest beyond the politically aware. Here in France, the overwhelming feeling is one of apathy about (and irritation with) the British; but these attitudes have been shaped by the fact that Britain is often perceived to be mad to want to leave an institution they regard as the best gravy train France ever boarded.

That outlook in turn is fed by Opeds in the press and on TV news that almost universally depict the United Kingdom as in the middle of a post-imperial identity crisis (within which Brexit is a welcome distraction) and peopled by racists who can’t stand foreigners. Imagine a set of attitudes about the French roughly akin to a UK newspaper called The Expressun, and you’d have a pretty good parallel.

The French do, however, have one big advantage over the British: they are far better at thinking for themselves – and of themselves. After a couple of drinks in private, they are happy to accept that the country doesn’t want to modernise, is too je m’en fou in its approach to manufacturing price and quality, and Macron is a banker “qui ne parle que des conneries” (talks nothing but bullshit). His hastily assembled ‘Grand débat’ is dismissed as a brainless PR stunt.

The French as a whole remain strongly wedded to the EU and suspicious of Le Pen, but are equally of the view (not far below the surface) that – were the need to arise – they could happily pull up the drawbridge and be totally self-sufficient. This is largely true, and can be seen via the medium of agrarian poster campaigns that proclaim yes, by all means lets have eco friendly, green and energy crops, but let’s ensure they’re French. Not much sense of the European Project there, mes enfants.

In the midst of all this stuff, Brexit as a subject barely features really. And this really is down to censorship, because what the French beyond well-informed Parisians don’t grasp at all is that the EU will be in deep doo-doo if there is a No Deal Brexit. It simply doesn’t occur to them. “The English? Pah! Who needs them?” For these – the majority by far, I think – Juncker is “un bon type” because he says exactly what they think of la perfide Albion.

Only yesterday, a local but well-travelled French businessman told me, “I am sad about Brexit, but Britain is the one who will feel pain, not us”. His colleagues nodded in rapport. I smiled in a manner I hoped would not give away the feeling that he was talking tripe.

In Germany, things are both very different, yet in other ways the same. The public there are, beyond the knuckle-draggers, all too aware of the fact that the EU (and Germany in particular) needs a deal with the UK. But the Merkel Government has a far stronger grip on the media than most people realise.

There’s no point telling the Germans that, because they won’t have it: the rest of us have personal experience that proves them wrong. However, this does explain why here too the public is being fed a line and, on the whole, accepts it without much questioning. An additional factor there is the amount of openly briefed diehard UK Remainer articles that are run in the press. There was a classic of its kind at yesterday’s Spiegel, where a bizarre piece of propaganda was spouted by Mr Creosote:

Beyond such madness, on January 25th Der Spiegel dutifully ran the ‘Brexit is a cynical distraction from Britain’s bigger problems’ eurobrief, while Die Welt has focused on ‘a UK citizen uprising’ on the continent, about which I posted last year and which is of course bankrolled by Brussels.

Welt also insists that Brexit “bedlam” has gripped Britain itself, while omitting to mention that it has gripped one building in Westminster. The UK, it says, has plunged into a Brexit crisis.

“The first casualty of war is truth,” somebody wrote shortly after the First World War. Wars today are fought with chemicals, cyber attacks, censorship, hidden persuasion and currencies.

The only insight I can offer this morning is that there is a war going on at the moment involving the UK and the EU, but the two sides line up as follows:

The People of the UK and several key EU electorates

The élites of the UK, the EU & NATO