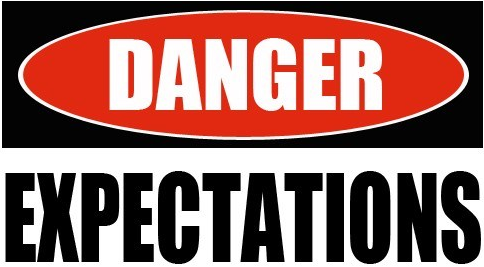 That leaves eight hours for fun

The lyrics above are from a song recorded by Evelyn Knight with the Ray Charles Singers in 1950, but before that it was a popular Italian tune called ‘La Tarantella’. The tarantella was a a popular dance in the Italy of the 1940s. Today, the song features as the soundtrack for a Hyundai commercial. The ad stinks, but the melody is catchy – and the lyrics have had me thinking of late.

We hear a lot these days (usually from cynical spin-doctors) about “managing expectations”. Lucky Me was a US Hit Parade song from an era when the overwhelming majority of Americans would probably have signed up to its sentiments: Truman was in power, the main elements of FDR social capitalism were still in place, and many working men were simply relieved to have survived the Second World War, have a job, be buying a house through the local Savings & Loan, and be able to take the family to a fun restaurant at the weekend. Lucky lucky lucky me.

President Eisenhower was a consensus politician who staved off the essentially alien idea of socialism without in any way compromising the decency behind the ideas of Franklin Delano Roosevelt. And the Kennedy Democrats who followed him continued the idea of fair social liberalism.

The assassination of John F Kennedy in 1963 gave the US Alt State its chance to start the neocon interventionist foreign policy that endures to this day. Nixon enthusiastically endorsed the domestic reflection of that policy – viz, the abandonment of real currency valuation and the gradual reversal (through rigged stock markets and a sociopathic tax system) of America’s wealth sharing. For 25 years after the War, the “mixed” policy had favoured labour over capital – and boosted levels of product consumption unparalleled  in history. This trend now abruptly U-turned.

Carter was quickly disposed of (via CIA and Pentagon connivance in the Iran hostage crisis) and following two terms of the stooge Reagan, his deputy the CIA lifer George Bush Sr became President. Until Trump’s election in 2016, every succeeding POTUS had acquiesced in the supremacy of a vicious, unscrupulous unelected State over Congress and the White House.

Between 1947 and 1963, a mixed economy in the US ushered in the highest levels of purchasing power, social mobility and cultural contentment ever seen on Earth. On a lower scale but involving a bigger leap, that same blend of social capitalism had a similar effect in Great Britain, Germany and France.

What’s happened since that model was abandoned? I’m indebted to Athenian friends for alerting me to the following statistics on the current state of play in America. I don’t dispute them, because I have seen parallel numbers over and over again.

After 40 years of neoliberal economics, the US stands (in world terms) 7th in literacy, 27th in maths, 22nd in science, 49th in life expectancy, and 178th in infant mortality. It leads the world in only three categories: number of imprisoned citizens per capita, the number of adults who believe angels are real, and defence spending. The US spends more than the next 26 countries combined……25 of whom are allies.

Today, America has more discontented, poor and alienated people than ever. (Get real: without them, Trump would never have stood a ghost of a chance of becoming President). Socio-politically, the voters themselves are not just split right down the middle: they regard the other side as bad, retarded and dangerous.

As a Benthamite thinker, I’m not impressed. The expectations of some 160 million or more US citizens have been frustrated; only the ridiculous optimism of the media pack keeps those people clinging to the American Dream…and the media grip is slipping. The Democratic Party insists that it can deliver that dream. But it is distracted by minority narcissism, and far more implicated in the goals of the Alt State than Trump.

The thought to hold here is that in 2019, the expectations of most US citizens are vastly greater and more material than could ever have been imagined in 1950.

And so to the United Kingdom.

In historical terms, the expectations of the British People have leapt even more than in the States – albeit from a smaller base. This description of life 70 years ago is from a History Today article of 2001:

‘The most obvious difference was in the physical fabric of the country. In 1950 the legacy of the Second World War was still everywhere to be seen. In the major cities, and particularly in London, there were vacant bomb-sites, unrepaired houses, temporary prefabs and gardens turned into allotments….society was still strongly influenced by war. Most grandfathers had served in the First World War, most fathers in the Second, and most young men were currently called up for two years of National Service…..Some basic commodities like butter, meat, tea and coal were still rationed….Nearly half the population lived in private rented accommodation – often in dingy rooms or bedsits with little privacy, comfort or warmth….Many rural homes lacked modern facilities like water sanitation, and electricity, while few had telephones…Many older or poorer people were content to chat with their neighbours, walk the dog or have a pint at the local. Pubs had much more limited opening times than today….Many children and teenagers belonged to voluntary associations like the Scouts and Guides, the Boys Brigade and church groups. They liked simple games like hopscotch, marbles and conkers….Most children walked to school and, like their parents, used public transport for longer journeys.”

Today, the average 1 to 2 parents household with kids and/or adults in employment has access to most of these things. Graduate parents in their forties and fifties often have all of them, and more.

Thus far, they have not on the whole been the main victims of neoliberal globalism. The losers have been the poor, the sick, the unemployed, the disabled, the exploitatively employed, middle-aged downmarket women, the younger products of dysfunctional households and (probably more than most, although the picture is confused) people under 25 and over 60.

But just as in America, Britain’s mass discontented have no real voice: like the US Democrats, the UK Labour Party has wandered off the mainstream and become obsessed with glib, trendy and altogether bourgeois concerns of minority groups. When one moves among the average and poorer people in Britain (and here in France too) one senses the seething resentment they feel towards the “special” treatment these groups seem to get from media-centric politicians – whom they generally regard as beneath contempt.

On both sides of the Atlantic, there are the dispossessed who want radical change: the young thrown on the scrap heap by poor education, the old ripped off by private savings scams, and the casual/unskilled workers pushed into unemployment by automation and internet distribution. A further group (smallish but growing rapidly now) are in turn losing out to financialised “growth” where real sales are falling, and the bean-counters see hard times ahead.

The lower middle classes in both countries vaguely sense rising costs and lower wages – but have very little time to think about it. If they knew more about the falsified pdi and inflation data, they’d be a lot angrier; but for the time being, they’re sort of depoliticised. Once Crash2 reaches maturity, that is going to change.

If you listen to to those being left behind, it rapidly becomes obvious that real growth in the mid 20th Century created expectations that are not being met by false growth in the 21st Century.

For all kinds of different reasons (but all in response to one braindead economic orthodoxy) these groups have spawned WASPI, 2020, UKIP, Tommy Robinson, Bernie Sanders, the Tea Party, Trump, the Front National, the Gilets Jaunes….and as important as anything I think, the élite shock of a majority in Britain wanting to leave the European Union.

The question of expectations has been subsumed by media complication during the entire Brexit process. For nearly three years, the managing downwards of the expectations of those who voted for a clean, Sovereign break from the European Union has been the prime focus of those involved in the corporato-bureaucratic coup d’état in Britain.

Thus, the majority of Tory Brexiteer MPs would today accept a May Deal with a renegotiated backstop firmly in place…even though, if her Deal goes through, Britain would require the permission of all 27 EU States to exit from that Deal.

Bizarrely, however, far from hardening her resolve to get that renegotiation, The Times reported yesterday on its front page (using what seem to me reliable sources) that she’s already caved on the renegotiation. The Brexit Secretary Stephen Barclay has so far failed to deny the story.

So why then is Theresa May going this week for yet further talks about getting what she clearly isn’t going to get….and without which, nothing will pass the UK Parliament?

None of it makes any sense beyond the blindingly obvious conclusion that our Prime Minister is stealing time purely in the hope of extending it.

One could be kind and say May is marking time, biding her time, buying time, working overtime in a race against time, and making up for lost time.

But that’s classic IABATO* and every clear thinker knows it.

She is using time to waste it. She is stealing time.

Today she has sent out yet another email to all Conservative MPs, preying cynically on their patriotism to suggest that this Deal is better than No Deal….in short, the diametric opposite of what she said eighteen months ago: “No Deal is better than a Bad Deal”. One or two Tory lobby fodder have gone onto the TV news to say that her deal is “acceptably unsatisfactory”. Isn’t that a belter?

I draw a simple conclusion to this essay. Think of it as a contemporary expression of the old Abe Lincoln quote about fooling, Time and people:

It lacks of course the elegant brevity of Lincoln’s aphorism, but then he was the President in a much simpler period of history than ours. Today, Abraham Lincoln would probably be on welfare.

My father held to an even simple version of Abe’s wisdom. As a Catholic raised in the pits of Manchester’s Salford slums, he knew more than most about the realities of grinding poverty. When I was about sixteen or so – during an argument when I was going through a mercifully brief phase of enthusiastic socialism – he told me, “Look….you’re soft and bright and lucky. Let me tell you something about your precious People: until enough of them don’t have a pot to piss into, nothing will change”.

Having a pot to piss into is, in and of itself, the realisation of an expectation. But in the West, we have moved far, far beyond that – and the muddled genie who got us to here is not about to be stuffed back into the bottle.

That is the irony of the globalist perversion of genuine creative social capitalism. Today, we have 24/7 telemedia that often feature admiring studies in gross megawealth. When you’re comfortably engaged in a little harmless lottery fantasy of an evening, that’s fine. When, on a Thursday morning, you don’t know how to get through until the Saturday Giro, it’s less than amusing.

Crash2 will be the catalyst that converts silent suffering into activist anger. Ultimately, even the frustrated expectation of at least one medium for that anger will be explosive if our political systems don’t recognise it.

Tomorrow: what would happen if there was an election now?