To a predictable MSM barrage of ridicule, dismissal and risible critique yesterday, Nigel Farage officially launched his Brexit Party – with a major rally set to take place in Birmingham tomorrow. Apart from a media set largely biased against him, the BP leader faces the major obstacles of FPTP, the potential for a Brexit vote split by UKIP, and the probability of Tory voters abstaining rather than voting for the Brexit Party. In addition, Tory and Labour WA negotiators may leave the Independence vote with an impossible hill to climb.

‘The comeback dolt has nothing to offer but false heroics and narcissism, which is absolutely the last thing any of us needs,’ wrote Guardian “journalist” Marina Hyde yesterday afternoon. We must all hope she reverts back to Jekyll before too long, otherwise I suspect the Gestapo might be feeling her collar on the basis of hate speech.

Ms Hyde’s piece on Nigel Farage’s official launch of the Brexit Party was a tediously spiteful, infantile and self-righteous example of why The Guardian is these days reduced to having a begging bowl at the bottom of every column. As for the comments (over 200 of them) that followed the Oliver Twist at the end, they were unpleasant, obscene and presumably loving in a hateful sort of manner.

The contemporary Libleft tendency in the United Kingdom no longer has a viable argument on most issues, so it settles for starting as many arguments as possible….driven by a stream of kneejerk insults. But if one can get past these, somewhere in the evidence there is usually a nugget or two that could give them a case, if ever they bothered to make one.

This is true of Farage and his Brexit Party, and hinges largely on the personality of Nigel himself. He is not your caring sharing sort of bloke, which is a pity because the early polls – the latest yesterday – show that he is going to have to be: 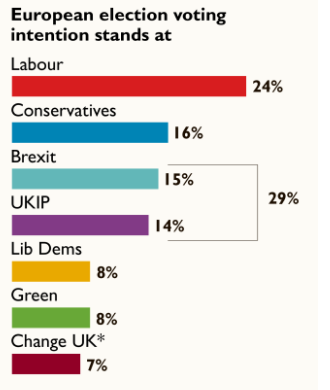 Let me say at the outset that, while I find Nigel Farage boorish and his governmental abilities at best doubtful, he is by far the most powerful weapon lovers of free speech, the rule of law and independence from superstate bullies have today. Look back at genuinely democratic ground-level movements over the last forty years in Britain, and he is the only figure of both stature and grassroots support out there. Whereas everything from the original SDP to Change UK has been built by top down breakaway no-hopers, Farage has done it the right way, from the bottom up.

Supercilious bourgeois Mensheviks in the mediapolis may laugh at his preference for bottoms up down the pub, but they utterly fail to grasp that for many traditional Brits, this is what gives him the common touch. However, the table above presents the Brexit leader with a predictable problem: while between them UKIP and the BP are the biggest single voting faction, predictably the Labour tribalists are sticking with This Great Movement of Ours….seeing, as they do, this as an issue of Party politics rather national failure. Further, the risible showing for the Tories suggests (I’m afraid) the Right’s tendency to abstain rather than switch.

What both these factors point to is the urgent need for Nigel to give himself an injection of statesmanship, with the end of greater inclusivity in mind.

In this sense, Mr Farage didn’t do himself a lot of favours over the last year. Slagging off UKIP at every opportunity was a mistake, and accusing it of racism somewhat trite – not to say inaccurate.

A good move would be to step out now, and say Britain’s survival as an independent nation comes before any previous acrimony. An even better one would be to get on the case of an electoral pact with UKIP.

This is especially important given the woeful collapse of the ERG group in the Conservative Party, and the lily-livered behaviour of (in particular) messrs Davies, Rees-Mogg, Johnson and (latterly, albeit only once) Raab. To my mind, only Cash, Redwood, Paterson, Francois and Baker have emerged with their Brexit credentials and dignity intact. Kate Hoey, of course, has also achieved that; but then, she was never going to do anything else.

The reality is now as follows: while I doubt anything of substance will emerge from the Tory-Labour attempt to outdo Stalin’s 1939 pact with Hitler, it just might produce a smoked and bendy mirror of sufficient obfuscation to tempt enough Tory and Labour Remainers over the Line of Exhaustion.

Were I to have a flutter on any breakthrough at the moment, I’d plump for the Mayflowers offering the Corbynistas a Second Referendum (WA vs No Deal?) in return for ratification by Parliament if WA wins that bout.

If that happens, then Nigel Farage and his Brexit Party will have missed the boat….and passed the peak of their maximum vote. Only a Leaver Parliament will then be able to rescue Brexit from the jaws of Brino. And that is going to take tactical voting on a level that goes way beyond even the irrepressible BP supremo.