Is France suffering from medical and air travel Brexitaria moving from fantasy to real life? Is Emmanuel Macron a dickhead? Is the award of €495 to Islamist Salah Abdeslam the worst ever case of legal virtue signalling? Does the discovery of French-owned weapons in the possession of Libyan rebel leader Khalifa Haftar mean the Elysée lied? Don’t be silly: the answer is “Yes”.

I’m afraid I found this newspaper headline from yesterday’s Dépeche just too tempting: 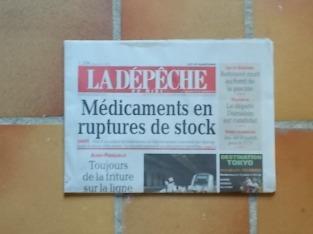 “Ironic” doesn’t even get close. After all the scaredycat Brexit drivel rolled out by Campbell, Adonis, Blair & Associates, France (ruled with an iron wife by our greatest critic President Macron) is facing a major medication shortage for use in both hospitals and GP surgeries.

But we aren’t. Stick that in whatever pipe you’re favouring this week, Emmanuel.

Triumphalism isn’t pretty at the best of times – and ordinary French citizens need medicines to be available, so it’s a tragedy they aren’t. On the other hand, I do live here and it’ll affect me too. And the story behind it is as much a damning indictment of Macron the neoliberal lunatic as the EU’s mendacious arrogance.

As part of his “modernisation reforms”, the Macron government has been letting private sector profits rise, and few more so than the ethics-dead pharmaceutical sector. As the Macronites grapple with France’s stubborn deficit, there is much suspicion that State buying of pharma supplies has been rationed…hence the supply problem. Leader articles in two main papers this week point the finger at neoliberal accountancy.

It’s been obvious for years that France has been importing from everywhere (especially Greece) in a bid to keep medication prices down, but the French State health Assurance is now under severe pressure on many levels – the recruiting of young staff in general, and rural GPs in particular, represent two areas of severe concern: three years ago, I could get a doctor’s appointment within 48 hours; now it’s nearly three weeks.

So for all you Remain lefties stumbling through a fog of your own making, no – the NHS is no safer under the Brussels monetarist morons than it is under the British ones. And all you economists and accountants of the Right who love the EU because of its rich man’s club predelictions, congratulations…..you’re screwing up the social services big time here too.

However, let’s not stop there: remember how we were told flights to the EU were going to get more expensive once we were outside the EU? Well, flights are going to get more expensive for flying out of the EU – especially for the French, who will soon be paying up to €18 extra for such tickets, and at least €5 for going from one EU State to another. This is part of a new “green tax” (yeh, right) being brought in by the National Assembly…France being the main driver of making this an EU-wide tax, also to be applied in other forms to airline fuel….just as it was to petrol prices and motorway tolls, says Transport Minister Elisabeth Borne.

The money (she adds) will mainly be invested in SNCF. A system that has just had its staffing rationalised. And been made more competitive with car travel by Macron bringing in the 80 kph truck road speed limit. SNCF is the President’s No 1 privatisation target if he makes it to a Second Term.

Join the dots, follow the money. This has nothing to do with ecology. It has everything to do with balancing the French deficit, and banker Macron’s neoliberal monetarist belief system.

Islamist Salah Abdeslam faces multiple life sentences for alleged mass murder committed on French soil, but has been awarded a €495 payment for a breach of his privacy in prison.

On November 13th 2015, the French State maintains that his fellow sons of Allah (largely organised by him) attacked various crowded sites in Paris, slaughtering 130 people whose sole crime seems to have been their disinterest in Islam and all its works.

Before this entangled case comes to trial however, Abdeslam has already been given a 20-year jail term for his part in a shootout in Belgium four months later.

Abdeslam is the most watched prisoner in France, after (admittedly) taking part in the 2015 atrocities that shocked France to the core.

Not only does the French legal system move exceeding slow, like ours – to quote Dickens – it is an ass. His chances of leaving prison in anything other than a wooden box are close to homoaepathic, so what on earth good is €495 ever going to be to him? The Versailles Administrative Court that won this “victory” says the 24/7 surveillance by camera ‘went too far’.

What, we wonder, would’ve been ‘far enough’? It interfered with his life – a life he has, whereas 130 innocent people don’t. I suppose it all comes down to whether 77 virgins in Heaven are better than life on Earth.

But either way, the hypocrisy and virtue signalling of this decision seems to me incredibly hollow given the increasing numbers of cameras watching all of us day and night….always accompanied by the pathetic claim that this is “for your own protection”. The existence of people like Salah Abdeslam with access to the vast funds required to underwrite atrocities is down to an injudicious mélange of US neocon energy policy and Stone Age religious zealotry. The existence of millions of cameras watching all of us comes from the same place – with nefarious by-products for the world’s paranoid security services.

This is especially relevant in the light of Laeticia Avia’s new Bill being debated now in the French National Assembly. A former lawyer who is a member of President Emmanuel Macron’s La Republique en Marche party, Avia is the party’s spokesperson on issues relating to hate speech – a term nobody seems able to define without bringing freedom of speech as we know it to the level it “enjoyed” in the unlamented Soviet Union. Like many of her ilk, Laeticia lacks an understanding of the dangers involved in such delicate matters.

Let me end today’s Gallic report with a series of denials by the State that took place last week, but remain truly breathtaking in their gruyère nature.

France’s defence ministry confirmed seven days ago that US-manufactured Javelin missiles belonging to the French military had been found on a base used by forces loyal to Libyan rebel leader Khalifa Haftar. The Ministry denied supplying them, which comes under the general heading of “they would say that”, given it’d be a breach of the UN-approved arms embargo….which France signed up to.

“Damaged and unusable, the armaments were being temporarily stocked at a depot ahead of their destruction,” a statement from the French ministry of defence said, adding that the missiles “were intended for the protection of a French military unit deployed to carry out counter-terrorism operations”. So, um, French troops were being protected by unusable armaments. How did they become unusable, we ask.

News station France24 observed less than obliquely that, “France broadly supports Khalifa Haftar, but there was never any question of selling, yielding, loaning or transferring these munitions to anybody in Libya”.

Of course not. So why is there the unanswered question of those arms ending up in Haftar’s possession?

Search me, squire. Your guess is as good as mine.