A shoal of Orwellian names, a rapidly expanding Secret State empire – and a political élite seemingly powerless to stop it.

Brief preamble: it seems I am now a Trump VIP – an opinion leader no less: an influencer of others.I keep writing to the Tangerine’s social media campaign to tell them that my feelings about The Donald are at best equivocal, but it makes no difference – they keep promoting me….and now I’ve gone beyond Gold to VIP. Last week I wrote to say I don’t have a vote in the US, but it’s obvious that they’re using AI. (See Friday’s Slogpost)

For some time now, The Times has been vaccinating its journalists against any kind of intelligence, artificial or otherwise. Only this can explain today’s piece by their top political team who reported as follows:

The general gist of the piece is that Michael Gove is now running everything, and BoJo has been sidelined. Now in case any of you are unaware of the provenance involved here, Gove was a Times hack for years, he is still very close to the Murderoch clan, and is indeed married to a Newscorp lifer. Old Roop is keen to get anything into print that suggests the Borisonian Tories are all over the place and that Mikey the Weirdo is really in charge. The Times line on Cummings is, in turn, that he is something of a meddler, but has big plans for redesigning the Civil Service on what it calls ‘a “hub and spoke” model for Whitehall’.

Oh dear: yet another model. The analogy here is that of a bicycle wheel that has a hub of gears at the centre, and lots of spokes heading outwards to the rim, upon which rests the tyre. It’s not a particularly helpful analogy, unless you’re keen on the idea of everything going round in circles until a puncture is sustained, at which point Bicycle Repair Man (BRM) becomes the Master of the Universe.

Now the thing about BRM is that your bike is always going to be ready tomorrow. As this is the basis upon which the political and bureaucratic classes operate already, I fail to see anything especially progressive in the parallel.

The only astonishing thing about the political correspondents who co-authored this load of nonsense is that they managed to write it without once mentioning the name of Mr Polymath, Sir Mark Sedwill.

Their piece did not mention that the hub of the wheel is not Parliament and not Gove, but in fact the man who keeps on and on grabbing control of more and more committees…… on combatting fake news, on future responses to biowarfare and health emergencies, on the Cabinet Office, on Security Affairs and on the future shape of the entire Whitehall machine.

Here is a diagram of the power he now has under his thumb:

As you can see, it is crammed with the hypocritical syntax that goes with the Secret Manipulative State – ‘Joint Biosecurity’, ‘Counter Disinformation’, ‘Media Development’ and all the rest of the Orwellian euphemisms.

Sedwill is in charge of surveillance (GCHQ), Internal Security (MI5), Overseas Intelligence (MI6 and Special Branch), and Germ Warfare (Biosecurity). In addition, he controls the entire information flow to the FCO (diplomacy), the Cabinet (Political Executive) and the Rapid Response Unit (77th Brigade, formed in 2015 – with Sedwill’s close involvement – to deal with large-scale emergencies).

And I nearly forgot….he’s Head of the Civil service. Silly me.

How can Britain’s most famous newspaper publish an article about power coalescence and fail to mention this poisonous anti-libertarian official?

Sedwill is our most powerful unelected official for half a millennium. This is not hyperbole – do the history here: Henry VIII reached the peak of his power roughly around 1520….exactly 500 years ago. Like Sixwivesman, Mark I is unaccountable to anyone. Unlike King Harry, he has at his disposal a supine media set, supreme control of all intelligence and administration, all the dirt on every major elected official (there is no shortage of it) and the power to present information on every issue in such a manner as to give credibility to his twisted narrative.

But is ‘poisonous anti-libertarian’ as a description of him unfair? Time to examine some facts.

A year ago, no less a title than the Financial Times reported that Sedwill played ‘a highly publicised part’ in the exit from office of Defence Secretary Gavin Williamson following a leak from the National Security Council. Williamson has always denied this, and those involved in the matter continue to tell me that he is telling the truth.

Gavin’s real crime was to question in Cabinet certain plans for Free Speech restriction, and a shift of emphasis in funds from Defence in general to Military Intelligence in particular. Sedwill wanted to allocate more resources to the intelligence services and police to fight terrorism and to combat the growing threat from cyber warfare and drones. Williamson insisted more money needed to go on conventional defence.

In March this year Williamson, in his role as Education Secretary,  called for “robust action” to enforce free speech codes, and stated that the government “would intervene to protect freedom of speech at universities if they failed to do so themselves”.

I don’t share his overall politics, but I do share his commitment to defending free speech – and his concerns about Sir Mark Sedwill’s boundless ambition….which seems largely to consist of an even more ideologically perverted version of Berthold Brecht’s daft idea of the “good lie to counter the bad lie”.

Perhaps Henry VIII is too obscure a figure for many today. So I’ll put Sedwill into the context of a 20th Century Great Man who would’ve thought Sir Mark an unadulterated arsehole – John F. Kennedy.

On 10th June 1963 – just five months before his obscene assassination at the hands of the kind of people with whom Sir Mark Sedwill routinely liaises, – JFK had this to say:

“I have chosen this time and place to discuss a topic on which ignorance too often abounds and the truth too rarely perceived. And that is the most important topic on earth: peace. What kind of peace do I mean and what kind of a peace do we seek? Not a Pax Americana enforced on the world by American weapons of war. Not the peace of the grave or the security of the slave. I am talking about genuine peace, the kind of peace that makes life on earth worth living, and the kind that enables men and nations to grow, and to hope, and build a better life for their children not merely peace for Americans but peace for all men and women, not merely peace in our time but peace in all time.”

In early November 1963 – barely weeks before his public execution – Kennedy made this incredibly brave speech – please do listen to it, and realise just how stupid electorates have become in the intervening 57 years:

It sealed his fate

Jack Kennedy had learned from the advice given to him by his predecessor as President, Dwight D. Eisenhower….viz, that multinational business, the arms industry and the CIA >> Texas oil >> Pentagon >> State Department axis was growing beyond public accountability – and was well on the way to being beyond political control.

Whatever largely GOP revisionist writers would have you believe, JFK died in defence of You and Me. He didn’t die so cold-hearted spooks like Sedwill could rule a roost full of his minions.

Andy Pryce is the most senior of Sir Mark’s Minions. He runs what could be described as the Ministry of Counterspin. He’s a confirmed European Bunion fan, and speaks at their various anti-openness jollies on a regular basis. These are the EU High Level Group on Fake News and the European Disinformation Laboratory. He also liases regularly with the Atlantic Council, NATO and well, you can guess the rest. He’s Winston Smith, but minus the belief in Truth. 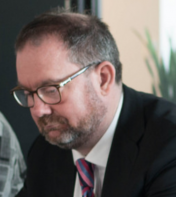 As you can see (left) Our Andy is crammed to the gills with charisma. He ran the ops desk during the Skripal Change-the-Story-Every-Day saga, and this pretty much made his name.

Andy Price’s ultimate employer the Foreign & Commonwealth Office (same DNA as Sedwill) refuses any and all FOI requests about what the Head of Counter-disinformation & Media Development actually does, but he is answerable only to Sir Mark. None of this hard to work out: online journalists put in the FOI requests purely to get the f**k off response as a test. Such things say more than truthful replies ever could.

Another classic clue to what Pryce does is the use of branding to describe the “wing” under he is protected – the Integrity Initiative. Wonderfully Orwellian. Basically, Andy is Head Narrative Writer. Nothing that his Counterspin Collective does is real.

For example,  last December, Scotland’s Daily Record revealed that Gateshead Mills in Fife, which is supposed to be ‘a small design and creativity charity’ , had been revealed in leaked documents as the base for The Institute for Statecraft, whose Integrity Initiative is run by military intelligence specialists and receives £2million from the Foreign Office.

More 1984isms – The Institute for Statecraft, doncha love it? It’s creative enough – because the craft involved is narrative writing, aka Event Invention and Truth Manipulation.

Let’s try and sum up what the Sedwill State Security Services are really about. He chooses and controls faceless officials who hide themselves behind laudable brand-names and obfuscate every issue with a view to having their will prevail….not the common good of an ethical and independent United Kingdom.

As long as such people in the shadows are steering what appears to happen in broad daylight, the EU will continue to thrive, while every diplomatic, political and electoral stunt will be used to get the UK back under the Brussels jackboot – as well as militarily answerable to NATO in general, and Federica Mogherini in particular.

None of these people like the Johnson Administration: they spit on The People’s decision to leave Europe, and they will use every supine medium – social or otherwise – to present a sense of disorder and chaos to a gullible public about everything Boris’s Boys & Girls touch. The Left, of course, will play its customary role as The Useful Idiots Club…..and waiting in the wings – once the economic solids hit the fan – will be another soulless front man called Keir Starmer.

The 2020 version of the British People are no match for these manipulators, and the manipulators know it. The idea that they are defending Western values is obscene. If they are not reined in – and soon – free speech and the Rule of Law will be, within a generation, norms that the citizenry neither remember nor value.

Try not to choke on your Sunday lunch.