The penny has finally dropped. Now at last am I released from my previous blindness about such things. I can see clearly now, the rain has gone: it’s all about symbolism.

Symbolism is like an embolism without any of the nasty death stuff. Symbolism is The New Black….and lest we forget, Black Lives Matter.

Take the matter of Black ethnicity: it’s a red herring often tinged with green envy, but the way to finally eradicate such racial prejudice is to – obvious when you think about it – eradicate all those symbols to do with racism. Lewis Hamilton for instance – a gigarich F1 racing driver – says the Mercedes car symbol should be banned because Nazis used to drive around in Mercs quite a lot. 85 years ago.

Naturally, every time I see the Merc circle on a car bonnet, I want to burst into tears in unalloyed admiration for my beloved Führer Adolf Hitler. And so if I don’t see it any more, I shall forget my wicked Nazi past and become a fully reformed graduate of Room 101.

Oddly enough, it’s the same with statues. I cannot look upon Edward Colston’s statue without wanting to dash to Africa, round up a thousand slaves, and ship them over to Portobello into the beastly hands of the nastiest white supremacist flogger I can find. A single glance in the direction of Cecil Rhodes’ sculpted form is enough to render me tumescent with desire to reconquer Zimbabwe, and reinstitute the growing of tobacco…the better to give as many people cancer as possible. But especially negroes.

There is no end to how far one can take this admirable pursuit of the infinitely evil White Race – unto their inevitable destruction, thereby for them to make way for something else we’re not entirely clear about just yet.

Why, for example is there only the Full English breakfast? Worse still, why is it accompanied by English tea when any foule knows tea does not grow in England but was exported to England by White Rajists using slave labour? We must start calling it Calcutta tea – or Kolcuter, as Indian symbolists now insist we must call that fine City.

Changing names of towns and cities is, of course, another incredibly effective use of symbolism. Just think of the massive amount of freedom of Thought and lucrative exports that have been created in Vietnam by changing the name of Hanoi to Ho Chi Minh City. Indeed, as an anti-Roman English nationalist, I applaud Mayor Khan’s ambition during his second term to change the name of London to Thamesistan.

Britain is, let’s face it, replete with gross insults aimed at inflaming every form of political correctness.

Manchester must become Personchester. Halifax shall be transformed into Halalfax. The Black Country into Personofcolourshire.

And what are we to make of the US? Shall Indiana become Nativeamericana? Minneapolis must surely morph into Floydopolis. White Plains into Black Pain.

Well folks, symbols are just fine and dandy. But when the bill arrives for Covid19, as Humphrey Bogart might have said, “They don’ amount to so much as a hill o’ beans”.

I left this little billet doux on Twitter this evening. Enjoy. 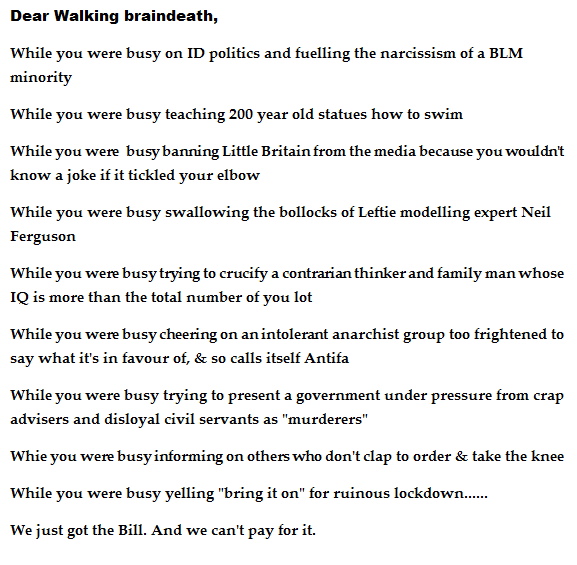