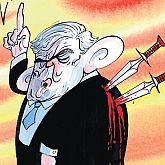 ‘Brown born again, country bored to death’. That seemed to be the message late last night as the PM proved yet again that he isn’t Brown and out. But most of the media are missing the significance of what’s happening here.
First off, let’s remember that this is the fourth time Brown has promised to change since his coronation. (In truth,it’s the fifth time – he had to promise to change when faced with Anyone But Gordon before he gathered up the Crown of Thorns.) But Brown is just an old leopard still unable to learn much beyond air-brushing out spots: in a matter of weeks (days?) he’ll revert to brooding paranoia again.
Second, I have sources I trust, and they’re not fibbing. Brown wasn’t sure Ainsworth would stay in the Cabinet until mid-afternoon yesterday; and the Dump Gordon camp still actively keen to live up to its name is well over eighty strong. At the first sign of the next wobble, they’ll be at it again. For this is a fight for the survival of anything recognisable as an Opposition Party called ‘New’ Labour.
Third, while today’s Times poll shows 71% of core Labour voters supporting the global saviour,these are not the people the Party needs to win back in May. Among the rest, only 41% see him as the best leader. Sixteen weeks before a General Election,this is a pathetic score. And other research this week shows that while only 17% of voters see the Tories as disunited, 67% view Labour in that light. They’re not wrong.
Finally, the MoS still has stuff up its sleeve…and the mysterious lady may yet still emerge from the shadows.

The maths are simple: a total failure to win back support – plus a stubborn Conservative lead between ten and thirteen per cent – spell extinction for those Backbenchers keen not to be thrown off the gravy-train.

There are in reality three plots in play here. One is the muddled affair that keeps demonstrating its inability to organise anything beyond that oddly oxymoronic state, chaotic standstill. On the whole, this one represents a broad tendency one might call enlightened self-interest – those who think ‘better upheaval and defeat than a certain rout’.
The second (of which we hear very little) consists of Big Beasts and their seconds, ready to go at a moment’s notice should Gordon suddenly start singing My old man’s a Dustman during PMQs. More of an almighty scrap than a plot, the members are Miliband and Balls – plus a dithering Johnson and a shrinking Harman.
The third – scarcely visible at all and therefore the most deadly – is that with just the one member, Lord Mandelson. His sole aim is to ensure the ultimate victory of New Labour; and his calculation remains that a Party led by Old Labour’s Brown will will suffer the same drubbing as that handed out to Michael Foot twenty-five years ago. (Probably the journalist who worked this out first is the Telegraph’s Benedict Brogan).
Not only does Mandelson not care a fig for the country, he doesn’t give a monkey’s about anyone in the Party who’s not on-message: all he desires is that his precious Project should survive and prosper. That will be his legacy after May, when he draws away from the day to day grind of stabbing folks in the chest for a job on the board of some ghastly globalist institution. And,I suspect, he still harbours ideas about being Foreign Secretary – for one absolutely must keep up the family traditions, don’t you know.

No UK Party of government has ever been this far behind so close to an election and won. The lobby fodder know this, the Cabinet knows it…and the leader in the wilderness James Purnell unquestionably knows it. Trust me, this is no more than an uneasy truce….the crown could yet fall off Gordon Brown’s troubled head.