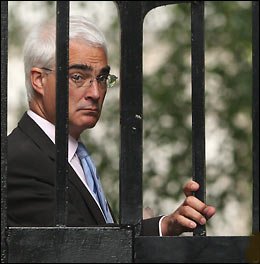 DISMAY AT MAY 6TH OPTION

A last-ditch attempt by doom-laden ‘snappers’ in Labour may yet pull the election back to April, The Slog has learned. And if you’re not fed up of this story, then the folks here at Slogger’s Roost most certainly are.

“It’s a compromise” said a tired TenMole this morning, “But there’s no point trying to read it any more. It’s chaotic”.

The US is still asleep – a good thing in many ways, as Alistair Darling’s ‘delay cuts until 2011’ will have the credit agencies wondering what they need to do to wake up the UK Government.
Slog readers will also recall the quotes yesterday from senior European credit managers we contacted: that Greece has a more realistic view of its position than does the UK’s fiscal elite. The latest Treasury releases will only confirm them in this view.

The following things seem to be reasonably clear:

1. As a last bargaining chip, the Chancellor has caved in on 2010 cuts, and gone along with the Brown/Balls strategy of ‘open letters’ to opinion-leading broadsheet titles pointing out that ‘our economists are more numerous than your economists, and they say we should delay cuts’. (This to counter the economists supporting Osborne’s Tory view)

2. In return, Mandelson and Darling are united in a belief that even ‘half-early’ as an election approach is better than ‘the last minute’ – and so they continue to press for April 25th – probably just too late for the next big economics data ‘reveal’.

In reality, neither of the above are particularly reassuring. The Balls economists talk of ‘giving the recovery a better chance’ by delaying. The ratings agencies have two responses to this: (1) Further delay will panic UK creditors and (2) Where is this non-finance private sector that’s going to recover? (A long-held Slog view).

Further, April 25th or 26th (for example) is a mere week before May 6th. The expected statistics must be viewed as likely to be disastrous if just seven days to absorb them could sink Labour. (The Slog has long believed the data will be a final wake-up call for the Will Huttons who see a private sector which simply isn’t there).

Just a week ago national papers and Slog sources recorded Darling as rebuffing pressure from the PM to use a March Budget to unveil a series of pre-election “giveaways” in a last-ditch bid to win votes. Then there was talk of no budget and a snap election….with which Darling went along. Now he seems to have been forced to go softer-pedal on deficit reduction: how can this have happened in the light of no new economic growth data? The answer appears mainly to be that both he and Lord Mandelson (each from their own obviously relevant perspectives) will do almost anything to avoid public recognition of the depth of UK deficit and recession post QE; and to some extent, because Ed Balls is now focused 24/7 on recovering ground he’s lost in the last five days.

Our veteran source at the Treasury is gloomy and confused. This remark within the last hour: “It’s manic here. Every analyst and commentator has been bombarding the press office,but nobody really has a line beyond ‘Alistair hasn’t changed his mind’. It’s a tough line to toe, and it is unlikely to reassure sovereign borrowers”.

The Bank of England remains a Mole-free zone for The Slogger, although any input from that quarter would be given a warm welcome. Twice in a row now, Mervyn King (and the MPC as a whole) have said the economy must not have any more QE (there isn’t any money for it anyway without creating rampant inflation) and City sources we use insist that King believes putting public finances in order – while unpleasant medicine – must be more important than nurturing a largely non-existent manufacturing sector.

The FTSE is down 0.7% in early trading, and Sterling has lost a whole cent against the Euro since this time yesterday. Sterling/Euro outlooks have now become a race between which set of public finances get beyond control first.

A final word from the Treasury source: “This will look terrible to those in the central banks and credit agencies who have already signalled their unease about failure to tackle the deficit. Infighting and election mania are the last things they’re looking for at the moment.”