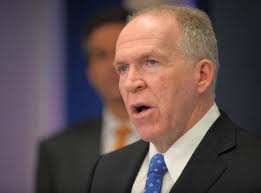 John Brennan….not in the right place

Displaying yet more of its spectacularly suicidal foot-shooting tendencies, the Obama   White House last night fessed up to the fact that they hadn’t been watching a live Skype video of the Bin Laden ‘attack’ at all.

While explaining at last why CIA Head John Brennan thought some 300 National Guard had stormed a bungalow in Afghanistan and found Osama cowering behind nine wives with a nuclear bazooka on his shoulder, it raises two further questions for the Goons  to get their heads around:

1. When Obama said “We got ‘im”, what was he watching – somebody removing Donald Trump’s hairpiece?

2. Why were they all photographed looking so variously stern and shocked – with a horror-struck hand-over-mouth Hillary? Was it……oh no, not…..the latest Gallup numbers a week earlier?

Talking of poll numbers, The Slog has been galvanized by last night’s quite extraordinary email from AOL . It may be billed as conspiracy theory by the pinched goblins at Altered Opinions Ltd, but every day brings further disturbing vindication of The Slog’s Day One conclusion: this is not a story about faked killings – OBL is dead, get over it – it is a tale of outrageous political chicanery.

Here’s the result Superbama was obviously after: Support for the Prezz rose sharply after the killing ofBin Laden, with a majority now approving of his overall job performance, as well as his handling of foreign policy, the war in Afghanistan and the threat of terrorism, according to the latest New York Times/CBS News poll.

And in further news from America yesterday, it emerged that Osama bin Laden had 500 euros hidden in his clothing when U.S. Navy Seals attacked his compound at Abbottabad. Everyone seemed to find this wildly amusing; for me, it was an incredibly vital and damning piece of evidence that we Europeans should finally start taking seriously: far from letting Islamic/ist states into the EU, we should pass an edict keeping them out until the war against fundamentalism has been won. Bin Laden chose euros because he knew perfectly well that, after the Near East, Europe was the safest place for him to be. The only thing that surprises me was that he wasn’t holding Sterling folding.

“We will not see Osama Bin Laden walking on this Earth again,” said the President yesterday. Nor shall we see Obama walking on water for much longer. The whole edifice of this cockeyed White House ‘account’ is sinking fast.

Now, for example, we are not allowed to see the body shots because “this could easily become a propaganda tool for terrorists”. Well, he should know: but a cursory look at this suggests yet more bollocks. The Islamists have their martyr, Mr President – your guys just blew him away. A mangled body lying across a flea-bitten bed after hiding in a moth-eaten barracks for five years is g.ood propaganda? Dear oh dear me….Obamite spin is even worse than Gordon Brown’s.

However, somebody released a leak Tuesday saying the gore-shots had been sold to Time magazine. What happened to that idea – did it die in the focus groups?

Latest update from the Washington Post…breaking:

Related stories for those with an open mind  and  a broad perspective: