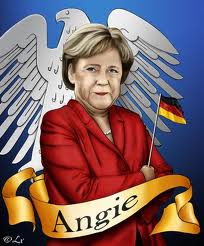 The pressure has proved too much for Angela Merkel. Her acceptance of leveraged funding alongside unilateral debt forgiveness represent more nails in the EU’s coffin.

At some indeterminate time last night, eurozone leaders agreed with lenders to Greece a simple quid pro quo: solvency fire-power to make lending safer, in return for a 50% haircut on Greek debt. This morning, the deal was confirmed with the usual delf-importance by those who somehow imagine we should thank them for mortgaging the next half-century. But it isn’t any kind of answer. For one thing, 50% isn’t enough for Greek survival. For another, this changes the game for Italy and Iberia: just as unilateral disarmament was always a mad idea, so too is a UDI forgiveness deal with Greece. The other ClubMeds will now want the same deal. As I’ve been saying for seven months, a global summit on real debt forgiveness across the planet is the only answer in the medium term.

So some form of EFSF leveraging will now be attempted by the EU. Even Merkel has been tempted by the madness, saying yesterday after the Bundestag vote that “the higher risk is justified”. She’s wrong of course, because no risk doomed to failure can ever be justified…..especially when gambling with citizens’ money. And she has volte-faced 180 degrees from three weeks ago, when she flatly rejected the idea of debt forgiveness for Greece…employing precisely the reason I did above. Frau Doktor Merkel has hoodwinked the German people, and when this latest nonsense falls apart, it will signal her Untergang.

In his first official statement since de facto ascendancy to the top ECB job, Mario Draghi  sided with the Central Bank hawks by enthusiastically agreeing to continuation of the junk-bond buying lunacy. Also emerging from the smoke and mirrors of the day before was an unfortunate acronym, the ‘SPIV’, or Special Purpose Investment Vehicle. This too spent some time being heralded as the relief of Mafeking, suggesting as it did that emerging nations like Brazil, India and China would surely have the hots for investment in an imploding EU ruling over a Europe heading for slump. Well, they don’t: China in particular seems confused as to what SPIV is, and why it might be interested in it.

Whatever happens during today and leading up to the weekend, nothing can change the stark reality facing France: it must relieve the pressure on its banks alone. This prospect was made worse by data suggesting that French exposure to Italian debt is almost as big as that to Greek insolvency.

If we imagine now a circle going in a clockwise direction, the inevitability of eurocrash becomes undeniable.

The EFSF will be leveraged, requiring at least some EU (not eurozone, mark you) commitment to further borrowing. But this addresses neither the Italian nor French problems.(It may not even address the IMF issue, on the subject of which Christine Lagarde remains suspiciously silent).

France will need to sell gold if it is to avoid a banking collapse there. Selling the gold will shatter its AAA status, and undermine the leveraged EFSF…which cannot cope with an Italian default. But now that 50% forgiveness is a precedent, Latin Europe and indeed Paris will be expecting the same…even though France, whose access to the EFSF is denied until it has sold other major assets, is in exactly the same position it was a week ago.

And so we return, full circle, to the problem we started with: an EFSF lacking in the firepower to stabilise debt mountains, and give the ClubMeds enough breathing space to recover economically. (That recovery itself is also looking increasingly beyond even Germany, let alone Italy and Iberia).

This is the vicious circle – the Vortex – that the EU cannot escape. And in terms of indebtedness in the West as a whole, most thinking realists now accept the mantra of ‘Today the EU, tomorrow the US’.

Debt-fuelled globalism is itself an even bigger Vortex. Without an acceptance right now that – following a degree of forgiveness – we must adjust our living standards and expectations down until the debts are gone, the entire construct of multinational business will shatter. Unfortunately, the central spine of that capitalist form is the need to consume our way out of recession: but consumption and personal debt reduction are antithetical. And bailouts must, in the end, lead to higher taxes to further depress spending.

In short – and, whether we like it or not, in conclusion – once Western debt has been paid off on sovereign, corporate and personal bases, we need a new form of capitalism in order to move forward. For me, this must be some form of internationally cooperative drive for a higher level of individual State self-sufficiency….not the mercantilist zero-sum game we’ve been playing for the last decade.

That would involve a move away from notional paper banking, and a degree of return to domestic land for food – along with physically manufactured exports for revenue. But I do not see the faintest glimmer of any country even accepting this thesis, let alone planning to institute it.

Output, growth, exported imperialism and material consumption have had their day as measures of success. The new measures will be margin, survival, sweating the State assets, and social stability/contentment.

In the immediate term, however, the next reality to face is a European slump that has barely got into its stride yet….if slumps do actually stride. They should really roll over and have a kip, I suppose. Alarmingly, I’m fairly sure not a single senior europol has  given this a second’s thought as yet. So far, they have fudged, funked and finally failed to provide a brave, workable solution to notional sovereign debt in a poorly constructed Union. So you can imagine how effective they’ll be at re-energising the economy.

Failure to do that will produce another circle increasingly concentric with the fiscal one I described above. That is, firepower requires taxes and borrowing; this reduces consumption, which first halts and then shrinks output….and ability to pay off debt.

Until radical realism takes off, forcing leaders to face facts, this slowmo descent into the vortex of viscous slime will continue, with only pathetically waving hands visible…until they too are still, and then swallowed up. I wish I could be more up about this. But in general, history rewards incompetent cowardice on this level with overthrowal and chaos. I am at a loss to understand why anyone imagines this instance should represent an exception to that rigid rule.