The Titanic, the Quantitative Easer, and the Austerititor System

The way in which you grasp just how disturbed the super-rich and powerful are is by observing what they do with stacks of money when given half a chance.

Australian billionaire Clive Palmer is going to build a 21st-century replica of the Titanic with his pile. He plans to sail it from England to New York – accompanied by the Chinese navy –  some time late in 2016, once a Chinese dockyard has built it for him.

Mr Palmer has signed a first-stage agreement with Nanjing province’s CSC Jinling Shipyard to build the ship as part of a planned fleet of luxury liners. As Palmer’s investments include property, coal, metals, soccer, and horses, you can see that he’s a philanthrope only in the sense that his definition of philanthropy is pretty eccentric….and eclectic.

It’s not clear what the Chinese navy’s role in all this is going to be, but one must also wonder about several other imponderables. These would be (1) What speed will Titanic II be doing off Nova Scotia (2) will the same approach to unsinkability be employed  (3) will there be enough lifeboats this time and (4) who’s going to be in charge of iceberg discipline?

The only time I’ve agreed with Andrew Marr this year was when he said three Sundays ago that the entire Titanic centenary jamboree is boring, tasteless and merely another disgusting attempt by Mammon to grub up some money. Looking in a WH Smiths at the weekend, I was stunned by the repetition of the word ‘Titanic’ on every shelf, in every magazine, and on the cover of every film review. And almost as tedious, hardly a day goes by without at least one financial writer referring to one economy, bank, government or another having ‘its Titanic moment’.

What they should of course be writing is that the governments and central bankers of the West face a titanic struggle. Mervyn King is another man in charge of lots of money (albeit ours) and he too is an object lesson in what not to do with it. The Bank of England Governor has just 10 days before he and his MPC drones meet a week on Wednesday to decide, as Bloomberg put it this morning,  ‘whether he can risk halting stimulus for an economy trying to shake off a recession’. I would’ve phrased it slightly differently, as in ‘whether he can justify chucking taxpayers’ hard-earned money at banks so they can stay alive without lending us any’, but maybe that wouldn’t be particularly constructive.

The point one should really make about Bloomberg’s dim-witted observation is that it is based on roughly the same amount of evidence as that supporting the existence of the Loch Ness Monster, minus only the grainy photographs. Neither QE nor Zirp have made the slightest difference to the US or UK economy, because that was never the idea in the first place. (Bernanke himself is still trying to persuade observers to forget his paper of 1988, in which he rejected QE as unproven and ineffective).

Anyway, data that starts pouring in tomorrow on manufacturing, construction and services, as well as consumer credit and house prices, will lead to his decision on May 10 to almost certainly continue doing it. Put it like this, given we are now officially back in recession, what bigger number could possibly come along to suggest he should stop doing it?

Well, perhaps I should answer my own question re that one. You see, it’s not just that Merv’s money-lobbing marathon is completely pointless for 99.5% of the citizenry and 71% of the economy: it’s every bit as much a problem of the quite remarkable endurance and stamina he has displayed in throwing vast amounts of our money at the firewall.

This is where the debate going on in the columns of the FT and on the floor of the Commons at the moment really begins to sound like something Jonathan Swift might have come up with while chewing some fresh new leaves of Mescalin. By the government’s own reckoning (and the Bank of England agrees) Mr King has spent £325,000,000,000 on the project thus far. That’s 325 billions, by the way: I know billions are old hat these days, but it’s more money than Imelda Marcus could’ve spent had she lived to be 7,800 years old, and had the internet to go at. In fact, the age I hail from was one where 325 was a pretty big number too.

Compare and contrast this number with the Treasury’s estimate of what net savings are to be achieved by Draper Osborne’s cost-cutting scissors between 2010 and 2014: £13,000,000,000. Same number of noughts involved, but in front of them is a number which, research shows, is one twenty-fifth of what the Bank of England’s Governor has spent stimulating an economy in the last eighteen months…an economy that mulishly refuses to be stimulated.

The whole idea is predicated on an inability to understand basic mathematics. Not only are these targets absolutely irrelevant to Britain’s survival or insolvency – we are talking about saving over four years a sum that represents very little more than the deficit per annum, and a mere 1.4% of the National Debt – even these aren’t being achieved: the current running annual budget deficit rose to £11.1 billion last February, and borrowing rose to £15.2 billion.

But just take in the mismatch here: Sir Mervyn King has spent 96% of the Get out of Jail pot on strengthening the financial system, while Little Osborne has patched just 4% of the hole in the bottom of the pot: 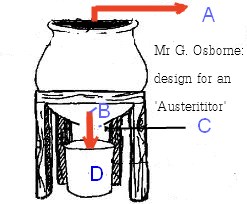 B – £20bn going to Internation Bankers in debt repayments over same period.

C – The Chancellor’s pot-hole suspension-bridge. (Under construction, due for completion 2078)

D – Bottomless bucket previously referred to as National Debt. (Only 1% visible above the waters)

It really isn’t going to work is it? No, it isn’t.

But here’s the truly terrifying part: Ed Balls has an idea for another machine, the Bollockometer. It consist of his mouth emitting spittle and bollocks. That’s it.

Enjoy the rest of the day.