Despite the non-coverage in Western media of the current post political-murder crisis in Greece, readers of this site should be in no doubt about the seriousness of the situation. A growing suspicion here is that the Samaras Government (and/or its security force allies) may have stage-managed the killing for political gain.

I reported earlier in the week having witnessed a Syriza/KKE anti-Golden Dawn demonstration in the Messinian capital of Kalamata last weekend. I opined at that time how I felt the Greek Left had become distracted from its real task, following the murder of one of its activists by a high-profile Golden Dawn supporter. It now looks likely that this was at least part of the intention behind the murder. 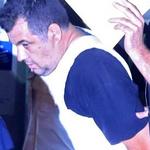 On September 18th, nine days ago, 45 year old Giorgos Roupakias (left) stabbed 34 year old Leftist hip-hop singer Pavlos Fyssas to death. The incident took place in front of dozens of witnesses outside a cafe near to the town centre square of Piraeus suburb Keratsini. Roupakias (a) made no attempt to hide his identity (b) left his weapon at the scene covered in fingerprints, and (c) made no serious attempt to escape.

Far from benefiting in any way, Golden Dawn is embarrassed by the killing. Police have established that Roupakias made several attempts to phone prominent GD members, and was largely rebuffed.

Shortly afterwards, an article was posted on the Internet purporting to come from reservist Special Forces. It called for the overthrow of the Greek constitution, and the immediate resignation of the government. And it made a plea for a partnership between Greek patriots and the army. As it appeared to suggest a joint op between the army and Golden Dawn, the post turned up the political heat.

The Samaras government has acted quickly since to establish two things with the mainstream Greek voter: first, that it and it alone is the only way for ‘law-abiding’ Greeks to be saved from a civil war between an on-the-march Hard Left on the one hand, and Far Right/Army coup plotters on the other.

Second, the ruling Coalition made a big deal about calling a meeting late Thursday night at the Supreme Court, attended by the Chief Prosecutor, to ascertain “whether a right wing coup might be imminent”.

Ministerial statements have had a consistent ‘Party line’ air to them, again adding to the suspicion that dirty tricks might be in play. “I am shaken by the event,” said Public Order Minister Nikos Dendias. He said the killing and recent violent incidents involving the party, along with name-calling in Parliament, “shows in the clearest possible way the intentions of the neo-Nazi creation.” And government spokesman Simos Kedikoglou added with equal pompousity, “We call on all political forces to raise a barrier to the vicious cycle of tension and violence. Democracy needs stability, cohesion and responsibility from all.”

In turn – and somewhat suspiciously in concert – Giorgos Roupakias has been extremely voluble in police custody on the subject of the phone calls he made immediately before the murder. Roupakias spoke on his mobile phone to Giorgos Patelis, general secretary of Golden Dawn’s offices in Nikaia, Piraeus. According to his testimony, the suspect also spoke to Giorgos D, a retired officer from the Armed Forces who frequented the same offices and Antonis Ts, who appears to be a friend of Roupakias’ son, and Theofanis Sv. The latters’ involvement in the case is still to be investigated. Roupakias rang Patelis immediately after the killing, but Patelis ignored the call.

This too has been used by Samaras-controlled police cadres to launch a series of raids on Golden Dawn offices. Golden Dawn MP Costas Barbarousis was arrested by police in Agrinio, following a search carried out at the local Golden Dawn offices during which the police ‘found’ a police cap, a helmet with two leg braces from a police platoon and 17 hunting cartridges which allegedly belong to the GD MP’s bodyguard. The police also confiscated 30 shields, two motorcycle helmets, 15 torches, 11 poles with flags, three wooden rods and an ax.

1. Sources insist that the Samaras government had polling information suggesting Golden Dawn was neck and neck with New Democracy in the Athens region, and that GD candidate Elias Kasidiaris was away ahead of the others for the imminent Athens Mayoral elections.

2. The revival in Syriza’s fortunes alongside this news spooked the ruling Coalition into believing that Leftist gains in any General election alongside a Golden Dawn hegemony in Athens would make Samaras’s position untenable. It would also, of course, present the EC and its Berlin friends with an enormous problem….a factor I and many others regard as highly significant.

3. The Coalition/security forces tactic is to harass Golden Dawn, tipping it over the edge into a long-threatened withdrawal from Parliament. Under Greek electoral law, this would mean new elections in the 75% of Greece where they had members. In the immediate aftermath of the Fyssas killing, they would undoubtedly suffer huge losses….while at the same time, the Samaras Government could discredit Syriza and KKE because of its ‘violent’ demonstrations. The result would almost certainly be a stronger post-election position for the Coalition.

In the early hours of this morning, the Left demos were being stepped up, and Golden Dawn was once more threatening to quit the Assembly. In doing so, they may well be falling into a trap. And a fairly clumsily laid trap at that. Here are just a few things that don’t make sense:

* If you were planning a Rightist coup, would you kick it off with a senseless murder, and put a post up on the Internet advertising its inevitability?

* The killer has been labelled ‘Golden Dawn’ by both Government and media, but it is far from certain he actually is a Party member. Allegations that police found his Party card in the garbage outside his house appear now to be false. Further, while in police custody, he’s gone out of his way to suggest close links to the Party leadership. He made no attempt to escape a conviction for the killing. The death penalty has been abolished in Greece. With the right backers in high places, how much time would he serve?

* Neither Golden Dawn nor Syriza is set to gain electorally from the murder: GD is losing support already, and GD deserters simply do not vote Syriza. The only winner from this farrago will be Samaras.

*Before the murder, Samaras was already distancing himself from future deals with Golden Dawn. The killing has enabled him to remove the Party as a threat, make him look more respectable via his statements about them being “the heirs of the Nazis”, and distract the Left into a series of set-piece confrontations with riot police.

* The high profile summoning of the Supreme Court amid wild talk about army coups (and on the basis of one dubious internet posting) smacks of opportunism at best, and a pre-ordained plan at worst.

Golden Dawn continues to fiercely deny any involvement in Fyssas’s death. A spokesman, Ilias Kasidiaris, announced that the Party had already started launching lawsuits against those who made such claims. This is not GD’s normal response to accusations of violence: it is usually quite happy to have such an aura around itself.

Speaking on Skai radio on Wednesday, Keratsini Mayor Loukas Tzannis said the victim had been involved in a heated discussion at the cafeteria, and on his way out of the cafe was ambushed by “a group of 15” who “according to witnesses” were members of the extreme-right Golden Dawn. Although himself an Independent, Tzannis supports the Government Coalition: funny how he knew exactly how many were in the mob.

One thing is for certain: Golden Dawn needed this incident like a hole in the head; whereas for Antonis Samaras, it has offered a much-needed lifeline. Coming as it did after various fantasy statements from the Prime Minister about recovery, a surge of support for GD (and a widespread strike on Wednesday by the Left) the murder of Pavlos Fyssas, the entire episode looks very convenient.

Stay tuned on this one. My water tells me it will develop further.

Yesterday at The Slog: Why America’s reality cheque is set to bounce