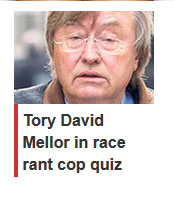 In perhaps its best scoop of all time, today’s Sun on Sunday has brought further embarrassment to an already embattled BBC by blowing the gaff on Auntie’s planned new Game Show, David Mellor’s Race-Rant Cop Quiz.

Although until now Project RRCQ has been a closely guarded secret, The Slog understands that final format details are being tested (using a recorded pilot version in early January) for full-scale launch some time in the Spring. Beeb insiders tell me that the show – using Mellor in the anchor role – will be the Corporation’s big weapon to win back ratings from ITV and Newscorp, because the 45-minute programme will be screened nightly at late pre-peak (7.15 – 8.00 pm) exclusively on the BBCNews Channel.

BBC Head of News & Current Affairs Hamish Jardine told The Slog this afternoon, “As the 24/7 news horizon becomes an increasingly Zero Analysis Zone, we felt the need to strengthen our offering in the tabloid bollocks niche”.

The format is expected to involve a selection of ethnic minority archetype contestants who will come on and hurl abuse at a panel of policemen, accusing them of brutality and/or excessive use of force. Any sign of emotion from the police will see them dunked in an aquarium full of hardLeft feminists, following which Mr Meldrew will call the contestant sweaty, stupid, “a sh*t” and so forth in the most aggressive way possible…using suggestions from the audience who will yell “Do you know who I am?”

Finally, the audience votes on whether the police or the ethnics are this weeks winners, a vote against which the losers can appeal, the final, final decision falling upon Mellors. The audience then vote on his decision, and if he loses, the fun-loving former Minister will have to suck the policemen’s toes in a Chelsea shirt.

“We see this as an accessible way to educate the public about the serious side of politics,” said lead producer Peregrine Obote-Fflynge. Asked to comment on the idea, Noel Edmonds told The Slog last night, “It makes Deal or No Deal look positively straightforward”.

It is also rumoured that Andrew Mitchell MP has been offered a weekly cameo role in the new series, using his now world-famous catchphrase “You’re all f**king plebs”.

Ealier at The Slog: 13,000 dangerous paedo-slaves at large in Britain says Theresa May