You can always tell when Brussels is nervous, because the delusional drivel warp factor hits nine on the scale.

So it is that Bloomberg gives us:

..and Berenberg economics trots out this: 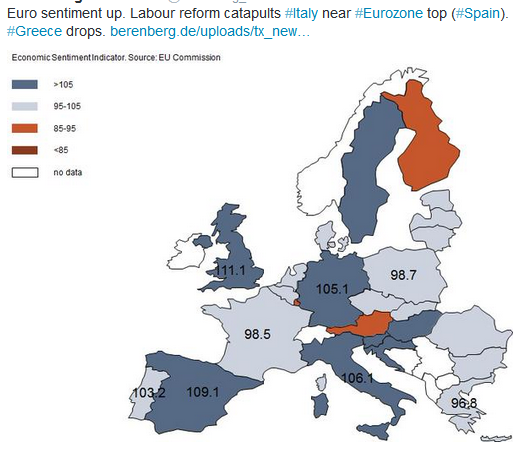 I particularly enjoyed, “Labour reform catapults Italy near to EU top”. How can an opinion work a catapult, I wonder.

You may have noticed that the ‘source’ for this crap is Brussels…and the ‘sentiment’ being tracked is really nothing more than the triumph of hope over experience. Or mind altering drugs. Or possible data-altering bureaucrats. (It’s happened before – remember May 2012 in Italy?)

Yes sports fans, Spain and Italy are up there with Germany in being thrilled and excited about the dazzling economic future that lies ahead of them.

Meanwhile, back on Planet Earth:

* Greece is negative, but the EC saw fit not to mention it. (I’m now doing so – and with a bit of luck I’ll get away with it)

Watch all this vapourise when the next few days of Δαυίδ v Goliath begin to unravel.