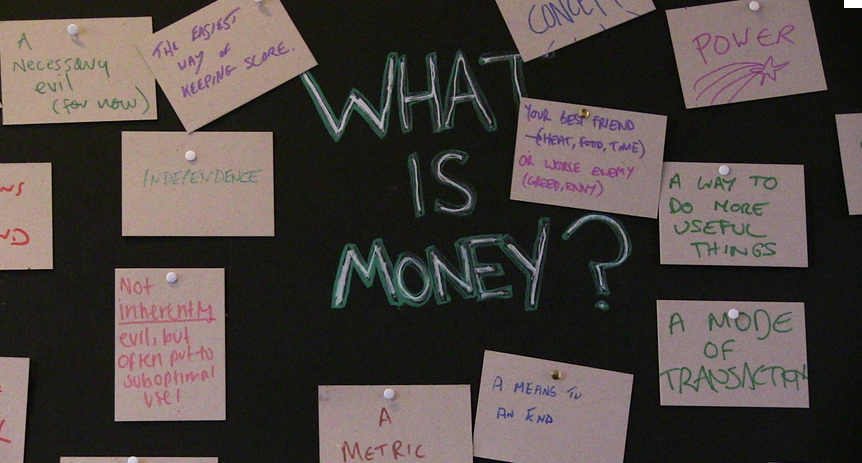 For the overwhelming number of people out there – stretching well into 3-figure IQs – the technicalities and varieties of ‘money’ are of no interest whatsoever. They don’t get it and they don’t care that they don’t get it. It bores the living crap out of them. Money for them is something you want enough of if possible, but not none of. That’s it, period, the end.
For the majority of Westerners , the important things in life are enjoying the comfort and safety of the tribe, a warm room below a dry roof, kids, shopping, sports, media entertainment and holidays. For almost all of this, one needs money….but getting it and then carrying on as usual is infinitely more important than the process of getting it and what it costs.
A few things learned while researching consumer consumption of debt:
1. Blue collar people ask only one question about an unsecured loan: “how much are the repayments per month?”
2. Over 90% of all mortgage consumers haven’t the faintest idea how ridiculous the sum they’re going to have to pay over 20-25 years actually is.
3. Under 17% of credit card users can tell you to within 5 basis points what interest they’re paying on unpaid balances.
In short, the sole concern is getting the wonga and then having what the other tribe members have got….see earlier.
The truly fascinating fact however is that they not only know others are more conversant with money technicals, they respect these people. The wiseasses at Zero Hedge, naked capitalism, Wikileaks, Wolf Richter, Max Keiser et al can poke fun at the Fed, Wall Street, George Osborne, Mario Draghi and Schäuble until the cows land after jumping over the Moon: most consumers think the authorities know their stuff. If Wolfie says the Greeks borrowed a whole pile of money and then ran off without paying, then that’s what happened.
Three western citizens in four believe that “money you’ve earned and paid tax on is money. Debt is not money you have, it’s money you owe. All borrowers must repay what they owe”. Any other view is needless over-complication.
Two generations of narrowly educated and media obsessed kids learned in turn from their parents that rich is better than poor, and being famous and ‘larging it’ is great…..but there is no such thing as a free lunch.
You can transmit all of the following to citizens, and it will have zero effect:
* Money as a term has been perverted miles beyond paper and coinage
* Fractional Reserve Banking creates ‘money’ out of thin air
* The Fed is in a corner, the UK Treasury’s debt is unsustainable, and the euro’s real value is barely above toilet tissue
* Fiat currency is not a car and it isn’t money either – it’s an empty promise
* QE has nothing to do with real life economics, and the current ‘inflation’ is not real inflation (yet)
* Get out there and buy some assets before bailins steal (or printing makes worthless) your promisory paper
* Your governments and central banks are lying to you….there is no recovery, there is only a global slump.

Here’s why that won’t change anything:
1. People think money is one thing
2. Transmitting the seven realities above evoke these headings: makes my brain hurt/don’t be silly/that’s Leftie propaganda/no idea what you mean
3. The distractive power of main/old media is massive – and largely in the hands of those who have a vested interest in nobody getting educated about any of this stuff.
The bottom line becomes, “A bunch of paranoid troublemakers are trying to disturb my simple life here (safely protected by the tribe) with a lot of dense thoughts and complicated ideas designed to bamboozle me. David Cameron [or whoever] is sticking to his guns, and that’s what we need because we’re in a crisis – we’re all in this together, and we won’t get out of it by being divided.”
Put 24/7 news confusion, short attention spans, a simplistic idea of money and bogey men into the pie, and a worrying proportion of almost any electorate are ready to eat it, without realising how humbled they are in doing so.
Yes, there IS a majority out there against the neolib view of life, because consequences have already taught many of them that they’re going to struggle bigtime to survive. But these are the four problems I discern:
§ Most of those being screwed gave up voting years ago, or are approaching dementia
§ Those against the greedy piggies are themselves tribally divided, and unwilling to engage in inter-tribe alliances
§ The passive acceptors grasp so little of the scam involved, they’ll vote for ‘the Big Society’ or whatever other complete cobblers those hijacking the liberal democracy model come up with
§ Governments will work harder and harder – in conjunction with old media, ISPs and the Security Services – to develop the idea that most if not all ‘NVEs’ are not thinking dissenters, but pernicious wreckers. Such defined people will get guilt, fear and if necessary criminal charges and prison sentences to dissuade them from continuing to dissent.
In that context, The considered Internet Opposition doesn’t stand a chance…..and may well anyway be undermined from within by its own Hard Left hijackers with their archaic Trotspeak of smash this, kill that and eat the other. Grist, let’s face it, to the NVE mill.
***********************
I’m reaching the point now where I think the only solution is to stop trying to explain ‘how’ or ‘why’, and instead start asserting ‘what’. That’s to say – to strike at the core of what the end result of all this is going to take away from regular tribe members with an average level of life-enhancing privileges. These core items are, quite obviously, loans, houses, cars, clothes, holidays, and meals out….with education, health and pensions coming a very poor equal last.
The ordinary People of Greece are way ahead of the curve on this one….as are the Portuguese, Spaniards and – soon enough – the Italians. They don’t need to be told what an iniquity the enormous power transfer from labour to capital is. But for the citizens of the United States, Britain and non-ClubMed EU members, the threat to their existing, emerging or former lifestyles needs to be as focused as the claptrap being vomited out by the other side.
I do not have the perfect aperture, gripping theme, Big Idea or ‘promotional mechanic’ as to how this can be achieved. I just think positive dissenters should be coming together and looking for media quid pro quos…..so we can wind up having (for example) the same persuasive power as that of the Globalist/EU/Special Relationship/Neoliberal axis of corrupt falsehood we would all prefer to leave.
The lighter side of yesterday at The Slog: Vote to Leave the World of condom machine destruction