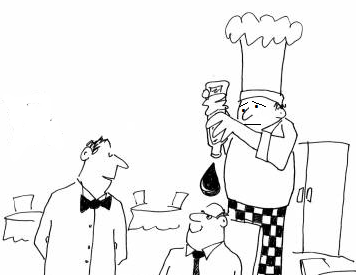 “The sauce maison is on it’s way, sir”

As the Western world twiddles its investment thumbs, sticks betting fingers in the air and keeps a beady eye out for the next symptom of crisis, The Slog examines the key players for evidence of the Right Stuff.

Last week, it was Mario Draghi’s turn to boldly go where only idiots like Abe go, and he grasped the opportunity with both hands. It delivered about 25 minutes of effervescence to the European markets, after which the default position returned to enervation. You might say that the ECB boss had promised not just to pay the crowd to watch Christians being eaten in the Coliseum, but also totally wild and unpredictable lions to do the deed. Instead, a little bloke with a bald head shuffled into the arena and shouted, “Wait, wait – you’re making a terrible mistake, already”. At which point, a fat ginger Tom wobbled in and licked his hand.

It was the same old circus and the bread was stale, but come last Wednesday I doubt if anyone really expected anything different from Osborne or Yellen. The British Chancellor is like Presley’s Colonel Parker: a Barnham figure peddling half-truths while he switches the pea from one walnut shell to another. Janet Yellen offers not so much bread and circuses as Fedspeak and courtesies…a weather-girl manqué forecasting that one day soon the rain will stop, and all those Arks really aren’t necessary at all.

But above all, these people are just waiters overpromising on the cuisine in a crumby restaurant: the restaurant has a quality problem, and their strategy is to increase the size of the menus. As the café is in a poor neigbourhood, they’re offering to take credit cards that none of the locals qualify for. Nothing works, and it’s obvious to everyone that it never will….everyone, that is, except them.

I remember many years ago watching a very funny sketch (I think with Bill Oddie in it) called “Why be small when you can be big?”

It featured some wide-boy Elmer Gantry hippie guru figure persuading people that the power of thought alone could make them rich, young, tall and so on. With every Budget that Engorged Osbollocks delivers, I remember that sketch (thought to be cutting-edge surreal druggy satire at the time) and think, ’42 years on, life is exceeding satire’.

In effect, whenever Little Lord Nobsore gets up to deliver his biannual study in proving Abe Lincoln wrong, he is that same high IQ but nevertheless brainless tartan paint salesman made to look clever by four decades of socialised discernment removal in our education system.

He was at it again on Wednesday – eyes like saucers and suitably powdered larynx – calling the deficit the debt, the collapsing export goods economy strong, and all the while offering older ladies a free lollipop for every year their pension’s late.

Why be old when you can be young?

Next, he was offering people down to their last five hundred quid the opportunity to put an extra thousand into their £5000 ISA package.

Why be poor when you can be rich?

And he ended with this, easily his best yet in terms of vainglorious poppycock (my annotations):

This is our Budget. One that reaches a surplus 2 so the next generation doesn’t have to pay our debts.

One that reforms our tax system 3 so that the next generation inherits a strmatesong economy.

One that takes bold decisions so that our children grow up fit and healthy 5….I commend to the House a Budget that puts the next generation first 6“.

These represent, after 24 hours to calm down, a measured and objective critique of the Chancellor’s closing remarks:

Harsh but, as I’m sure you’ll agree, fair. Yesterday, before Ego Gorseboner got up to squeak, I posted this  take on the logical conclusion of his approach. Hits were very light, suggesting that most people now just accept he’s a depraved coke-head, and thus can’t be bothered to listen to him any more. Still, every little helps.

Later yesterday, I switched over to Boombust TV, in order to take my quarterly narcoleptic medication formerly known as Janet Yellen. Despite regularly extracting the Michael by the way, I do like Boombust. my favourites are Tom Keene (who is a dead ringer for Grandpa Dracula in the Addams Family) and the anchor Bonny, who’s a kind of wonderful cross between Big Hair Woman circa 1988 and a cattle auctioneer. The way she says

leaves me in awed speculation that perhaps her tongue is an Origami black belt. Or an F1 fanbelt, one of the two.

Also they tend to be entertaining, and try their best to make a tedious subject interesting. And OK, maybe they miss every elephant hidden in every room, but you do get to learn stuff.

and sounds like she has a degree in political correctness from the University of the Bronx ever managed to get chosen as the élite’s Patsy. I guess they’re just desperate these days, but even so she falls way, way behind Lee Harvey Oswald as an explanation of anything.

The way she begins every answer with “So….” is the ultimate fingernail/blackboard torture. I’m told by what’s left of my New York contacts that this “so” prefix business is now a national speech impediment on a par with the end-sentence rising cadence Australia introduced to the world thirty years ago. But nobody has it like Yellen: it’s as if the daughter of one of the Dead End Kids and a Jewish feminist mafiosa capodecina lucked  into the job as Fed Chair:

She is not, of course, like that at all: she’s Ivy League educated…and she didn’t always look like Grandma Giles:

The point is – sadly, as always – like Milt Friedman, she is a through-and-through academic with absolutely zero commercial experience. And thus she represents that naively insouciant respectability the US Robber Barons always want in place as they go about their business of perverting every original and genuine aspiration the American founding fathers ever had.

Watching the Q&A after her announcements, I found myself yet again fervently wishing that one day, one – just the one – media hack would ask:

“Tell me Chair Yellen, given that another rate hike will collapse every EM from Ukraine to Chile, your choices would seem to be either changing your mind or going for the Big One Scenario in which the US becomes the global economy. So which is it to be?”

To which her answer would probably emerge as:

“Sho….de commiddee has carefully considered orlov de anomalies in de woil’ economy, while taking into account some of de signs suggesting a steady progreshion of conshuma confidence alongside a continuing degree of varlladivverdee. And de conclusion of dis lengthy debate is dat we should resoive our judgement – an’ dus carry over any foida parsadive action until such a moment in toime as de carnsequinces can be more closely monedurd”.

Mario Draghi has never been anything other than a conniving banker covered in clouds that follow him from his crooked past. George Osborne is a silly ex-Bullingdon generalist who read History, yet somehow garnered no wisdom from it. Janet Yellen is a woman who wrote Employment, output and capital accumulation in an open economy: a disequilibrium approach.

None of them have the Right Stuff required at this, a pivotal time in human history. What we need is bright young chefs with fresh ideas for new recipes, not more waiters serving up yesterday’s leftovers…spiced up with very risqué sauces.

Last night at The Slog: Lines on the nature of rabbits, Swedes and thumbs