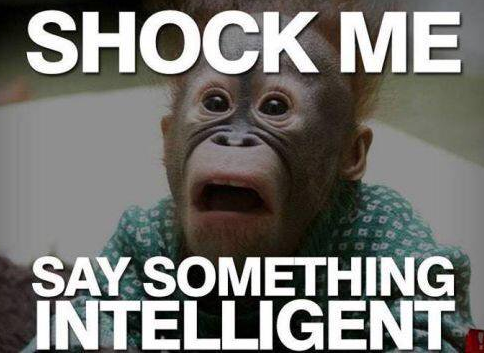 Talking to quite a broad range of Brits both here, elsewhere in Europe and in England yesterday, most of them confessed to being “all Brexited out”. I agree with them entirely, which is why yesterday’s Slogposts (while on the subject of the vote) were wholly concerned with what the Referendum said about first of all the British Left in particular and our ‘democracy’ in general; and then whether for many people it was even about the EU at all.

However, over the weekend some quotes, tweets and confrontations were just so silly, I’d now like to ask one final question before moving on: was there any medium in the UK at all over the last few months that was giving out objective news, as opposed to PR spin and blatant propaganda?  The night before the vote, I posted to say the vote wasn’t democratic, because far from being informed, the electorate were largely confused, frightened and bored by the time voting day arrived.

I still stand by that. But rather than a philosophical look at the question, I thought today (it being Sunday, although I spent most of yesterday thinking it was Sunday too) we could have a little giggle and smile through the medium of examples.

Without question, the topper of the day came from Jon Snow at Channel 4, who tweeted this uniquely daft anecdote:

I have never had the slightest doubt that Snow is not a real journalist at all, but an agitator and all-round propagandist. One gets the impression watching him in action, however, that he sees himself as the secret offspring of a pre-Nunnery affair between Mother Theresa and Václav Havel. Jon goes beyond holier than thou, and into “I’m holier than all of you put together”.

So while the tweet didn’t surprise me at all (I still have the oddest feeling that he made it up) it did remind me of just how inaccurate the guy’s self-image is. First up, it was socially divisive and ageist at the same time, in reporting what these two idiots said without any hint of disapproval. Many Waspis may have noticed that Channel Four is, on the whole, completely uninterested in the Pensions heist: they equate old people with bigotry; except for Jon ‘Driven’ Snow, of course: he is just as riddled with ideologyworm as he ever was.

Second, think about it: in tears? In tears? The lack of voyager gene, the self-pity, the blindness about crimes committed at all levels by the Brussels mafia….could anyone be that daft and incapable of independent thought?

What we don’t know of course (assuming they exist) is what other shoppers said when treated to this izzounfaaaair bollocks. Buy some long trousers? When is your voice going to break? Diddums?

It’s all a bit Two Airmen sketch for me. Doubtless the C4 follow-up will be the counselling the couple now need, and who’s going to pay for it. Still, it makes a change from being accused of murder on account of having a contrary opinion. And that in turn made a change from being told I was irrational, deranged and illogical.

In the end, it was a close thing. Here in Sloggers’ Roost, we didn’t see it as remotely close, as the score by polling day eve was Slog 192 Brexit reasons, Remaindeers 3 fantasies of disaster. It seemed a pretty clear result to me.

Either way, the score on the day was 52-48, and ten million hankies being dished out the day after to wimpy Yoof who’d been bullied by marauding gangs of deadly,  crutch waving old hooligans. All of which means that, for those who lost, there’s a reason to re-run the whole thing. Nick Wilson wants the referendum re-run because of the ‘false’ NHS promise; so far, he has yet to comment on the use of £9million of our money to send a Remain recommendation to every home in Britain.

Three million nitwits have now signed a petition for rerun (good losers all) but already evidence is emerging that a degree of Irish “vote early and often” mentality has been involved in the compilation of the names. On the other side of the coin however – and like a bad penny, Nigel Mirage is always around – the Sunday People did catch two-gobs out in rather witty fashion this morning:

The story as a whole tells you three things very clearly: Nige is (as I’ve always maintained) just another politician who demands special privileges; there really are an alarming number of spoilt brat Brits  who won’t take no for an answer; and had the result been 52-48, another three million would be signing another petition. This means that six million voters in our country are stupid, and unable to accept that democracy is about the will of the majority holding sway.

I get huge heat from Kippers about my opinion of Mr Farage. But then, if the cap fits one must wear it. Early on Thursday evening, the UKip leader – who resigned and then talked himself out of resigning in 2015 – decided to concede defeat and then unconcede it. I had a yellatelly moment as this was announced: whatTF did he think he was playing at? To pass a UK driving test, one has to show the examiner at every opportunity that you understand the correct order of mirror, signal, manoeuvre. Nigel runs his life, as far as I can see, on the basis of speak, await reaction, engage brain.

But that’s Nigel, and for all his oddities it is incontrovertibly true that without this quite extraordinary man, our chances of getting an EU in/out referendum would have been nil, and possibly less. Also the Left would have nobody to hate, and we can’t allow that. VoteLeave is now showing its true colours by trying to freeze Farage out of the Brexit process, and while Boris Goveson’s busy making plans for a new Cabinet, they don’t seem to include the UKip boss, as such.

It wasn’t the Tories who got us out of Brussels Rules, it was UKip passion and a massive Leave vote from those who rarely engage in politics….plus some stunning speeches and top-notch soundbites from Kate Hoey, a woman as smart as she is honest. But it is entirely typical of the Establishment to assume that now the war’s over, those they used as cannon fodder should be left to rot in No Man’s Land.

Thatcherite Michael is more rum cove than Gove at the best of times, but there’s something about him that is more inclusive than Borisconi. Had they been cast in those Blackadder episodes set in the First World War, Boris would’ve been General Melchett and Michael his adjutant, Darling. 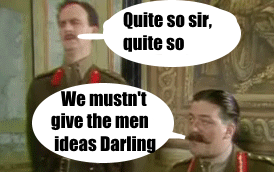 Sadly, I’m afraid Farage would’ve been a shoo-in for the George role:

And so to the latest news obsession…. where is George Osborne?

This was my take last night: 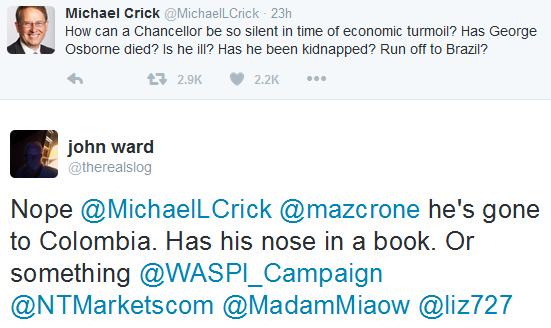 But today, there were rumours that Little Osborne was about to resign. So I tried this:

Look, you have to admit: it’s funny. The youth vote blames their grannies because 36% of 18-25s couldn’t be arsed to vote. A Pakistani tweeter says he has “lost count” of the insults shouted at his Asian friends since the result was announced. Nicola Sturgeon wants to use the Scottish Parliament to overturn the decision of Brits who outnumber Scots by 7 to 1. In a fit of pique, the most crooked bank on the planet has moved 300 UK jobs to Paris…and the Left are upset about it.

We must cling to the Truth: Twitter is a lunatic asylum where People at one time kept in attics by their ashamed families can Have Their Say. If not, then Britain is peopled from Lands End to John O’Groats by childish, self-pitying, comfort blanket clutching, tearful, undemocratic delusional denialists with grossly engorged double standards.

Last night at The Slog: Why the LABaTORY brought Brexit on its own head