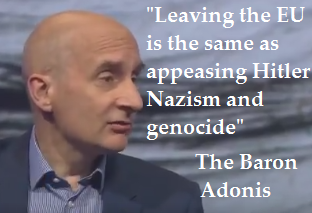 Andrew Adonis (it is his real name, his Dad having been a Greek Cypriot waiter) is often put forward as a bloke who had a difficult start in life, but made it ‘to the Top’ on sheer ability. It is certainly true that his Mum ran off when he was three, that he was put into care by the Social Services, and then won a scholarship to a posh private boarding school…..a traumatic background that mirrors that of Michael Gove in many ways, and as it happens, Gove today says he is on “the same page” as the now Baron Adonis of Camden.

In fact, like so many of the superiority complexes inhabiting Britain’s Ivory Tower of Babel, he has made it to the highest storey on four bases: pure IQ, academia, media and the avoidance of election at all times.

Predictably, he has never fulfilled a job in the financial, commercial or manufacturing economy. But this didn’t stop him, after being a don for some years, from landing a position at the rabidly pro-EU Financial Times. He eventually became public policy editor (a non-job) and then moved to The Observer, where he used his non-existent political credentials to get a job writing about politics.

I say non-existent, but by that I mean merely that he held minor positions and couldn’t make his mind up where he stood politically. He wasn’t objective so much as clueless. From 1987 until 1991, Andrew was an Oxford City Councillor for the Social Democratic Party and later the Liberal Democrats, representing the North Ward. Given his background and the usual low turnout, he got elected….for the only time in his life.

And he really has been an actively engaged evader of the People’s will. In 1994, he was selected by the Liberal Democrats as their Prospective Parliamentary Candidate for the Westbury Constituency, but resigned just in time to join the Labour Party.  In 1998, having jumped on the Blairwagon, he was selected as Labour candidate to contest St George’s Ward for Islington London Borough Council. He withdrew from the process before the election.

Astonishingly, based on this muddled sum of mediocrity, he took a job in the shiny new Number Ten Policy Unit. He was “ennobled” in 2005, entering the Lords – and thus clearing the way for him to join the Government….without an election.

So we can see a trend developing, can we not? Andrew is a chap who is at best frightened of the electorate, and at worst disdainful of it. Today, thirteen years on, he is Twitter’s ghastly Gobby Baron, tweeting away merrily on a daily basis….and revelling in his role as the chap who openly accepts that The People have to be taught how to vote. And who better to teach them than an academic?

However, setting aside his position as a former oik who now sits for a socialist Party in the decrepit House of Lords that rejects everything the oiks vote for, it is only fair to ask what he achieved in his various offices of State before he became a fulltime activist treading upon the sans culottes beneath.

The Baron Adonis worked, in turn, on the following briefs: the Constitution, Education, Children, Schools & Families, Transport, Industrial Strategy and Infrastructure – the last two in a Shadow Role working with the Ed Miliband of Hope.

His two greatest achievements were Academy Schools (based on the premise that all oiks like him have an IQ around 150, only with the parents to cough up for fees and uniforms) and the Money Pit nobody wants formerly known as the HS2 rail link.

As for his other briefs, we still don’t have a written Constitution (so we can bomb whoever we like when we like with asking for permission), dysfunctional families grew under his tutelage, sexual abuse in care homes became a national scandal, our infrastructure resembles that of India, privatised train services are an overcrowded disastrous ripoff, and the road system is in permanent gridlock.

All this qualifies the Baron to tell the majority of the electorate that they are wrong about the European Union, being as we are too stupid to understand what a marvellous thing it is for unelected functionaries everywhere who know better. Like him, in fact.

Indeed, to make his position clear, Andrew Adonis said, “leaving the EU is the same as appeasing Hitler, Nazism and genocide”. He just didn’t say how.

Adonis is and always was a fan of the euro. In 2017, he wrote this in Prospect Magazine:

‘For contrary to Gordon’s ceaseless ‘project fear’ campaigns of his decade as Chancellor, the Euro has proved remarkably durable and successful. Had Britain been present at the creation, we might now be engaging in a plan for European productivity and prosperity, not Barmy Brexit.’

Such a statement from a highly intelligent person baffles and boggles in equal measure, but mainly it leads one to doubt all the bases for the development of IQ scores. However, as I have written perhaps ad nauseam, while the British Establishment awards high office on the basis of intelligence, the People want only to have the criterion replaced by an emphasis on wisdom.

Britain, Italy, Poland and Hungary wouldn’t have the euro at any price. This is to do with its utterly false valuation and NordEurope favouritism, not its durability and success. Among more and more currency traders, the euro is seen as a Dead Man Walking, while the eurozone itself has struggled to show any real growth without massive QE. It’s central flaw as a currency is the fact that it assumes economic equality among all 18 nations in it, and is “run” by a central bank accountable to nobody at all. But this is all detail, and obviously I lack Andrew’s vision of a world run for the People by Superstates who regularly overrule the People. For their own good, naturally.

In that sense – calling upon his vast media experience – last year Adonis wrote to the BBC demanding Andrew Neill’s dismissal for his “obvious pro-Brexit bias”. Bless. Neill hears the will of the People, and naively thinks (as the State broadcaster) that this should be respected. Silly Andrew. Bad Andrew.

So how is The Baron dealing with up-to-date reality as viewed from the perspective of Twitter? Well, like all we media professionals, he has an innate sense of priorities. Or inane, one of the two. His latest obsession is Paul Dacre:

One gets the sense on reading Handy Andy’s tweets that he’s gone beyond muddled and on to unhinged. John Humphrys (the BBC’s longest standing national treasure) and Paul Dacre (the UK’s most commercially successful newspaper editor) belong in “the bygone era” because they are so old, they think what Trump would do on Brexit is of interest to people, although Dacre is not on the record as thinking anything about it. In fact, speculation about what Trump would achieve if put in charge of Brexit had been viral on social media for the previous 36 hours.

It’s we Meistertweeters call hitting a nail on the head. Just not the right nail. But clearly, he’s a dog with a bone on the mighty importance of Dacre’s long-overdue and largely unlamented retirement:

Er, right. It’s a revolution, and the most important news of the week. If you say so, chum. As a result of this Earth-shaking event, the Daily Mail is going to be full-on pro Brussels and thus we are but hours away from leapfrogging Mrs May. You leapfrog over her if you want to Your Lordship, but thankfully most people don’t give a doodah about Dacre.

Andrew is a man of the people, you see. The people in the bubble, hermetically sealed for eternity from The People. The Bourbons were made of similar stuff.

His last demand was to IDS, ordering a retraction:

Regular Sloggers will know that I am no more a fan of IDS than I am of Dacre the Mad. But for once, Iain has articulated the feelings of many Brexiteers about The Underminers, viz: if you think the EU and the euro are so fab, why not go and live there?

It is not an unreasonable riposte. I live in France (its position in the eurozone being a danger I accept) because French culture would never allow anyone as confused and serially wrong as Adonis anywhere near an influential role in the State. I live here because the police are not politicised, Muslims are told not to wear religious symbols in public or leave, the trains are clean, on time and affordable, the infrastructural investment is the finest in Europe, France still makes stuff, France rejects Murdoch and all his works, France could feed all its People without importing, and French services and artisans have not yet become a den of thieves in a country that has become an overcrowded shithole.

These days, one must take one’s mercies and nurture them, however rare they might be. This (for once bright) Monday morning, happiness for me is the twenty-five miles of water between France and The Barren Adonis of Camden.

Yesterday at The Slog: protesting against the Bourbons