Geopolitics, planned supply cuts, bourse directionalising, energy wars and refinement cost manipulation are behind an increase in petrol prices. The investigation below shows why media drivel about ‘regional instability’ and ‘Russian blackmail’ as factors as complete hokum. Once again, the Alt States are in charge, and the Citizen suffers as a result of it.

We are told over and over again by the neoliberal globalist community that free markets, anti-protectionist “reform” and low taxes are the only way to fly. We are assured on a daily basis that allowing the very rich to keep as much of their money as possible will in the end produce faster economic growth and thus benefit the ordinary citizen consumer/worker in the long run.

Nobody wants to talk about how long a run that’s going to be, but I can definitively say we have now done three marathons, and the results are not going according to plan. I’ve posted about this so many times now that I’ve no desire to bore regular Sloggers with another lesson in the Study of the Obvious.

Today, I want to narrow it down a great deal. The starting part is this observation: the stock markets are not free, they are directed by cheap credit; the currency markets are not economically reflective, they are controlled by central banks; and the commodity markets are not natural, they are driven by large cartels in many cases. The worst and most flagrant example of that is oil and its refinement into motor fuels.

By and large, there are five oil producing giants by region: the Middle East, Russia, North America, South America and China.

There are other considerations to bear in mind. By far the biggest Middle East (OPEC) producer is Saudi, equal in pole position as a single country to Russia, with the US not far behind at 8.9bbls.

The South American figure is almost entirely composed of Brazil, Venezuela and Mexico. Not that all three of these countries are steeped in US$-denominated debt. The country openly invaded by the US (twice) was Iraq – the second biggest OPEC producer – and the country historically most demonised by US diplomacy is the third biggest OPEC producer, Iran.

The picture changes (and becomes even clearer) when we look at exporters of oil. The Big Five here are OPEC, Russia, Canada, Africa and Kazakhstan. The US, China and South America keep 97+%  of their production for use in the home market. Note the US and China as the biggest home consumers. The No 2 exporter Russia has been, in recent years, the country most demonised by US neoconservatives.

The reason Saudi Arabia doesn’t get bullied by the Special Relationship and EUNATO Axis is that (a) it’s a massive arms customer for all of them (b) being well armed, it wouldn’t be a pushover and (c) it has far too much power in both oil and financial geopolitics for anyone to start messing with it. Given we’re supposed to be engaged in a War on Terror, neutrals should note that in sheer monetary terms, the Saudis are by far the biggest bankrollers of Sunni Islamism. Jihadists in particular are overwhelmingly Sunni. So it’s an odd way to run a war on terror by arming terrorist suppliers. Meanwhile, take heed all ye Kazakhstanis.

So far so not very good. The last geopolitical point to note, however – and Numero Uno in the current context – is that Syria is a key energy asset not because of its own oil output, but because its most important ally is Russia – and he who controls Syria controls the ease or difficulty with which Russian oil gets to market via pipelines….and the ability of NATO users to extend pipelines from the Arabian Gulf to Europe via Syria to break the need of Europe for Russian gas. It is also, importantly, Russia’s only current direct access to the Mediterranean via Russian-controlled (ie, leased) ports on the Syrian coast.

Summarising then, access to oil is vital for very heavy users of it (like the US and China), and so big exporters are more important than just big producers as far as the two most powerful nations in the world operate. It’s why China is crawling all over Nigeria and Angola, and keen to develop known supplies in Botswana; and it’s why the US is happy to have South American oil producers in its debt. Hugely expensive oil is bad news for heavy users of it….like the UK, the US, the EU and China. China, however, is rapidly moving closer to Putinist Russia in a bid to break Dollar currency hegemony and could get oil from there in extremis. All the more reason, therefore, to have Russia weakened and, if necessary, broken up.

So in one sentence, Russia and Syria are the Baddies and the Saudis are quite nice really.

Now the hypocritical obscenity of that proposition is camouflaged among the western MSM by bogeyman tactics, along the lines of “Syria is a haven for terrorists against our ally Israel”, and “Just imagine giving Putin total power over Europe’s oil supplies”. The desired response from the Sleeple is “Yes, we need to control nasty Jihadists and the price of our petrol and home heating fuel”.

In other words – from the political and media classes – this is all being done to protect you and keep petrol prices affordable.

However, in Britain we have 15,000 active Jihadists (who for some reason we can’t trace) and of late the price of petrol has been shooting up. Taking the latter point, petrol prices of course reflect the rising price of oil: 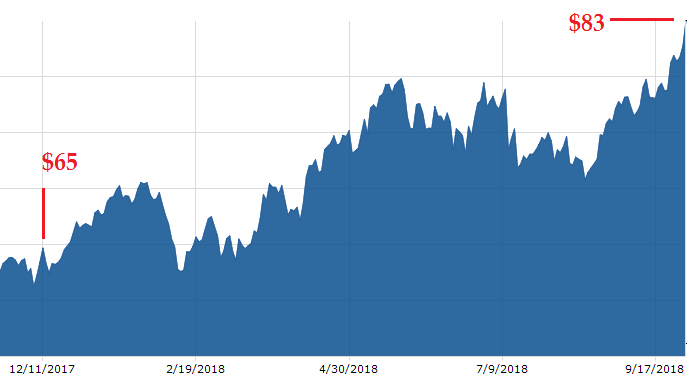 In fact, in just ten months the price has rocketed by 27.7%. Since the start of 2017, however, it has gone up by a whopping 51.3%. This does not reflect natural market factors like supply and demand at all. In the short term, the World has an over-supply of oil.

This has been bad for fiscal deficits, economic growth and citizen travel costs not just in the UK….if anything, retailer intervention to start a price war has allowed us to get off quite likely. The rising price is only doing three sets of assholes any good: Saudi Arabian princes with an amputation habit, strongly CIA/Pentagon connected Texan oil barons, and globalist petrol refiners. The Saudis have pushed prices up by slashing production, and the Texan dirty work has been done by Wall Street. (After a while, it becomes almost impossible to separate the two factors: put simply, the market is rigged to the advantage of the Giga-Rich of the Alt States who make up that magic 3% or less of us).

Right across Europe and the developing World, the price increases are a nightmare for the 97% suffering variously from destitution, austerity and recession depending on their location and social class.

By far the biggest factor is the OPEC supply cut, but we mustn’t forget the never-end role of petrol refiners in manipulating prices upwards during the process of receiving, sitting on and then ‘recording’ the ‘cost’ of refining crude. This still-unprosecuted crookery is, in fact, an excellent example of how 21st century politicians serve their real masters.

In May 2013, the EU raided the offices of BP and Shell looking for (and allegedly finding) massive evidence of price rigging. In December 2015, the investigation was called off.

Also in 2013, UK Prime Minister David Cameron said he would be “deeply concerned” by evidence of petrol price-rigging, and the Serious Fraud Office opened an investigation into…..BP and Shell. Cameron promised MPs that he would back an inquiry into rigging, and introduce a ‘fair fuel-price stabiliser’. Neither ever saw the light of day.

So now you know: your Government takes orders from oil exporters, bombs Syria to aid those same exporters, demonises Russia to help protect the US Dollar hegemony, and happily accepts price manipulation that makes your life more expensive. It doesn’t matter a jot if your Government is American, British or EU. The same applies.

And all this awful stuff would’ve been avoided if we had moved on past oil as an energy form following the supply crises of the early 1970s. Science could have achieved this easily by now, had it been given the funds. But needs must when the devilish 3% drives….and as we know, they drive everything. Everything we drive simply gets more and more expensive.