Twitter informs me that today is World Smile Day. Perhaps (for once) there’s a message in there for people like me: instead of getting angry about global mendacity, why not just smile and shake one’s head nonchalantly? On the other hand, perhaps there isn’t. Perhaps some troll called Hillary Comey or Theresa Mandelson sits on the naughty step every day and churns out this banal balm.

What catches up with political leaders more than any other single factor is the belief that they can fool everyone all the time. It’s 150 years since Abe Lincoln’s famous quote, but still the lesson hasn’t been learned:

‘A stronger, fairer country for us all’ is a good start to World Smile Day: as the saying goes, “you have to smile”….and you  do, you really do. Social mobility has been blocked, violent gun, knife and machete crime is ignored in favour of arch police pc fantasies, State pensions are withheld, employment stats bent out of all recognition, news censored, pardons granted to the foul among us, élite guilt ignored and the corporate class allowed to profiteer and evade tax with impunity. It is indeed a terrific outcome for them – which is what she means by ‘for us all’, especially when said in the context of thanking all the delusional hard-working Party apparatchiks who make everything look good.

Later that day, Theresa went on to say that she would “uphold the international order of rules”. Truth at last.

The tricky thing about SlateShorts is that, whereas in my youth they were restricted to Labour local councils, the right wing of the GOP, the Tory Monday Club and the Socialist Workers Party of Great Britain, today they’re everywhere. Those short on bricks and picnic sandwiches merrily draw conclusions based on nothing. Not just feeble reasoning or ideology or bigotry (although they all help) but nothing that is available for review in the physical universe.

We can be certain that being a fruitloop is now a mass movement purely by looking at the massive retweeting of cobblers:

Poor Emily, unable to see the difference between accusation and guilt. But then, this is how radical US feminism, neoliberal economics, Momentum and Antifa operate today. 8,400 people retweeting something as inane as this is of profound concern to many of us. Cue smile to arrest rise in blood pressure….move on to the next space cadet:

Now here we see an interesting case of a politician in trouble, and desperate to show he likes Jews really….but also that only socialists in the 1930s stood up to fascism – and finally, that something from eighty years ago is of any relevance to Britain’s key social problems today – which have nothing to do with Jews and everything to do with Islam, élite 3% greed and a lack of any ability to deconstruct bollocks.

This effort got 7,400 retweets. One was from Diane Abbott, which you’d expect. It’s up on social media accompanied by very carefully choreographed shots of his voice filling adoring faces with unalloyed devotion to Jeremy of Nazareth. It reminded me of Leni Riefenstahl’s Nazi-funded 1936 movie Triumph of the Will. As Mark Twain remarked, “History doesn’t repeat, but it does rhyme”.

I find it hard to raise a smile about the Momentum Corbynistas. Even on World Smile Day. They’re more dangerous than Boris Johnson….not least because Boris seems to have blown it as far as the Conservative Party goes:

This one brought my smile back temporarily. The people in the hall bursting with confidence about democratic freedoms in the UK are the usual wild applauders fitted with blind eyes and deaf ears…..the Smuggies. You have to be blind, deaf, dumb and smug to be confident about democratic freedoms when the likes of BoJo try to pervert justice being served upon Newscorp, quietly squash inquiries about Tory sexual oddities, make up nonsense about chemical warfare and accuse the Russian World Cup hosting of being “just like the 1936 Nazi Olympics”. Another 4,100 idiots retweeted this effort. I found my smile shrinking again….and things didn’t improve on reading this effort at subtle argument on US Twitter yesterday: 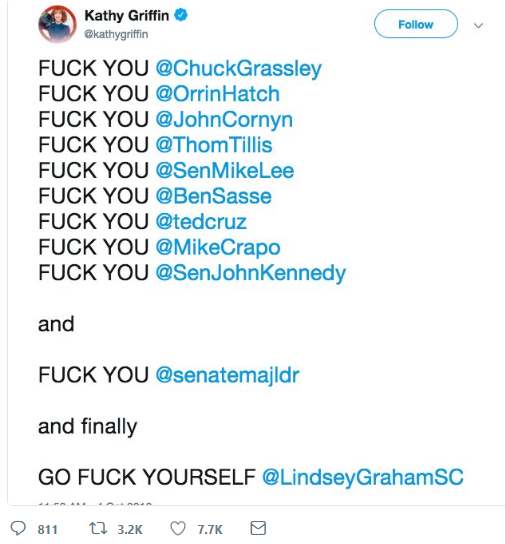 I do worry about the US more and more these days. Eleven fucks and list of people Kathy doesn’t like very much earn 7,700 retweets.

The smile’s gone now. Perhaps the trick is to have a name appropriate to the occasion. So on World Smile Day, here’s a man called Smiley:

Have a good day and enjoy the weekend.