The Grenfell Tower Inquiry (if left to itself) is highly likely to condemn neoliberal underinvestment in emergency services in general, and former London Mayor Boris Johnson in particular. But Left activists seem determined to make it a class and race issue. Is the Bonfire Night Effigy story part of Labour’s weaponisation process? The Slog asks some awkward questions.

Call it an instinct or just bitter experience, but every now and then a story emerges that doesn’t quite gel. When that happens – and especially when it happens in the case of an already politicised event  – the chances are that there is more to it than one first thought.

I’m referring to the bizarre case of a Grenfell effigy being burnt on a bonfire yesterday.

Last night was Guy Fawkes night – a night when lots of people either have, or go to, bonfires. Last year, Grenfell Tower became a tragic bonfire death for 72 human beings. If you’ve never been in a fire, you cannot grasp what a horrible way to die it represents. It was an appalling disaster, and there seems little doubt that corruption in relation to the cladding of the building (and ignored safety concerns of the residents) played a part in it.

Immediately following the event, Grenfell Tower was actively weaponised by – specifically – Momentum, the Labour Party, the liberal press and prominent racial injustice Rentagobs like Diane Abbott and David Lammy.  This was done purely because the residents of Grenfell Tower were mainly poor and/or members of immigrant ethnic minorities.

It is worth reporting (although those media would never do so) that many of the wild accusations thrown around at the time proved to be myths – for example, the “fact” that cheap cladding with a more aesthetically appealing finish been chosen “so as not to offend upmarket private residents in nearby towers”.

In turn, certain legally dubious actions were glossed over in the immediate emotional aftermath. Typically, Theresa May was bounced into declaring an amnesty against prosecution of those who had no right to be in the Tower in the first place and those who had illegally sublet their Council flats to them. The first group’s amnesty is understandable (many of the poor souls were dead or gravely ill) but letting the greedy subletters off struck me as both incomprehensible and disgraceful.

Some months later while in Goa, purely by accident I unearthed a “scam” about council flat dwellers subletting to immigrants, bribing DWP inspectors here (and Indian officials in Goa) then living a life of Riley in the ultra-low cost Indian sunspot at the taxpayers’ expense. Not a single newspaper or MP I approached was interested in going near it.

If there is one thing worse than the Poor dying needlessly in a fire, it is the Poor being exploited by individual greed and cynical political activists. But one ‘can’t’ say that sort of thing any more: it’s off-message, nasty and – naturally – racist.

More than a year on, unsurprisingly the Grenfell Tower scandal has largely disappeared off the radar. The Public Inquiry has fallen off the front pages in favour of Love-rat Ant, Royal weddings, pregnant Meghan and the eternal unravelling of Brexit.

With the spotlight off the case, however, several vital findings have emerged:

This is hardly the stuff of Nixon White House whitewash. The single biggest failures highlighted by the Inquiry have emerged as woefully inadequate investment in equipment and training within the Fire Services; and poor fire escape design and cladding specification in the original building itself.

Even thus far, therefore, the Grenfell Tower findings confirm one idea above all others: that neoliberal ideology about only minimal need for infrastructural investment and private sector regulation is based on greed, heartless accountancy and caveat emptor.  The citizen comes a very poor last. That is not a culture I want to be part of…which is why I no longer am.

What has not so far emerged in any shape or form is evidence of inbuilt bigotry among the public officials on the basis of either race or social standing. On the contrary: one early thing to emerge was that up and down Britain – in low immigrant and privately rented occupancy of Tower Blocks as well – these same failures have emerged. Grenfell Tower is a tragedy awaiting repetition. But the culprit is very obviously an insane economic philosophy, not racism and class snobbery.

If they ignored that central Truth, the British public would be guilty of the same crime committed by strident feminism during the US saga of approving Brett Kavanaugh’s appointment as a Supreme Court judge: the real iniquity of Kananaugh was not his early sexual exploits (hopelessly unproven) but the overwhelming evidence of his collusion with corrupt elements of the unelected Alt State. But Feminazi mob rule got Brett a sympathy vote…and now he’s an SCJ for life. Nice one, girls.

If you think this an irrelevant point, think again: the biggest human culprit of underinvestment and actual service cuts in the Grenfell incident is former Mayor Boris Johnson. If there is any real justice, this Inquiry is going to bring his political career to a well-deserved end.

Sadly, “neoliberal capitalism is to blame” is not the sort of rallying cry to get the British electorate off its collective sofa. And for the likes of Momentum and the usual Race Industry suspects, it isn’t anywhere near emotive enough. So blaming it all on scumfascistracistbigots must be put to the fore.

All I’m doing here is establishing hard facts and obvious motives. Surprise, surprise, within 24 hours of the ‘Grenfell Bonfire’ event, this lady appears on our screens: 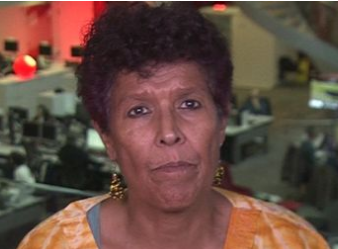 Her name is Moyra Samuels, and she is an activist in the Justice For Grenfell campaign group. Moyra is clearly a member of an ethnic minority.

She told the BBC that the video shot at the effigy bonfire was “a disgusting attack on vulnerable people”. Ms Samuels added:

“There is a worrying rise of racism in this country at the moment. And that is concerning, because it’s now starting to impact on us directly, which means that we actually need to be thinking what we do about this, and how we respond to this as a whole.”

There has been no attack on vulnerable people (it was at best a braindead prank) and the stats do not support Moyra’s claim about a rise in UK racism. There was one bonfire, one effigy and one video involved here. With a population of 68 million, I’d be surprised if fewer than 6,800 bonfires took place. 0.01% is an almost homoaeopathic number.

Here are some further observations and questions:

A terrible pun I know, but who exactly is fanning the flames here, and why? I find it horrific that anyone would find such a ‘joke’ in any way funny, but then like all bloggers I get emails and comments confirming the reality of a tiny deranged minority on a regular basis – many by their own hand. Pillocks who light £20 notes in front of beggars are appalling gargoyles, but they do exist.

The idea that there are many such people is, nevertheless, daft. Moyra herself admits in her BBC interview, “We have no doubt about decent generous people across Britain, and this actual act doesn’t represent ordinary British people”.  So, um, why is she stereotyping in this manner?

I have I think established motive and opportunity in this case. But there is more to “means” than a video. This is what good journalists should be delving into now – but of course, they won’t be. So I am going to look further into this if I can do so without crossing sub judice lines. Specifically, I would like to know who shot the video, who gave it to the media, and what the political affiliations of that person or persons are.

If you can help in any way, the email address as always is jawslog@gmail.com.