Sometimes, it doesn’t do to get to a stage of analysis paralysis when it comes to those things we are genuinely unable to unravel. The US midterm election results strike me as coming into this category, and thus can be summed up as follows:

The Dems got the vote out to some extent – certainly enough to regain control of the House. But the Senate stays GOP. Making gains there was always going to be a 1 in 3 gradient for the Democrats. So it’s Honours Even.

If only one could use the word ‘honour’ in relation to the European Commission in general, and Guy Verhofstadt in particular. The gappy Belgian chocolate has been busy spending other people’s money over the last few days. He is spending it – at whose behest we know not – with the following utterly illegal and undemocratic objective in mind: to further defame a European Union member State leader who has now won three democratic elections in a row. This is how Sly Verdummkopf has been doing it: 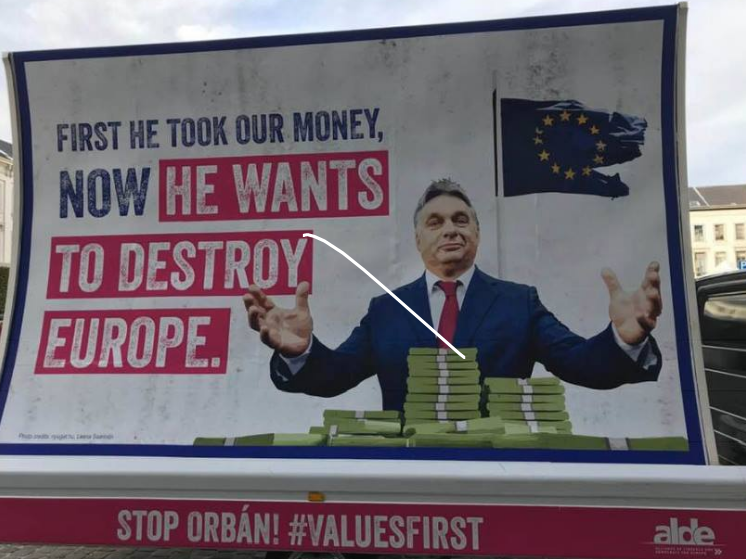 Is there, I ask myself, an Advertising Standards Authority in the EU? If not, why not? Because this piece of foul propaganda would fail all of the UK’s rules.

Orban does NOT want to destroy Europe. If the EU has values, then can it FFS start with free speech, not commands to STOP democratically elected leaders? And stop them from what for crying out loud – listening to their constituents, unlike the EC?

Is there a Verhofstadt Standards Authority in the EU? How is one commissioner able to slag off the Greeks and Hungarians and Poles and Italians and Brits and anyone else who has progressed beyond neolithic power mania?

Who paid for this? Was it only Verhofstunt’s own Party adherents – who were not asked before he squandered their hard-earned money in this way? Or were EC funds involved in it?

This man is a grisly, slimey, corrupt bombast with no place in a fair culture that values individual freedom. He leaves a disgusting stain behind whenever he bellows (via bought media) at people without access to citizens’ money. He is a 21st century Goebbels heaping lie upon dissembling half-truth in a bid to save his own ill-gotten gains at any price.

UK politicians prepared to share a tent with Guy Verhofstadt should hang their heads in shame. He is the excrement-constructed personification of why the majority of British people wish to regain complete and unequivocal sovereign separation from every aspect of Brussels dictatorship. How low have we sunk to want a “deal” with the mobsters he represents? How on Earth can British Left Remainers see this man as somehow a better sleeping bag companion than past Labour heroes who had the common sense to prefer Men of the People to predators on the back of the People? What scintilla of good do they perceive in this odious carpetbagger?

If the British electorate lacks the decency and discernment to reject this man and his cohorts, then quite frankly I will cease to care about what the United Kingdom does next. I’m at the point of saying, “Fine –  sod it: let’s have a second bloody vote. Let’s see if we can make the result a far more decisive humiliation than the first time for these tinpot perverters of the social contract”. Let’s blast them with so much repulsive heat, all the Guy Verminrats are forced to return to their former refuges under the cold stones of the road to serfdom.