There is a famous punchline at the end of the Jewish joke about a negligent grandson finally going to visit his grandma, in which she says, “So why, after all this time, are you coming empty-handed?” Theresa May returned to Britain today more empty-handed than the new German Government looking for mercy from the Allies in 1919.  Like a latter-day Tommy Cooper, she tried in vain to conjure up an unexpected outcome from yet another EU summit. But it didn’t work, and it wasn’t funny. 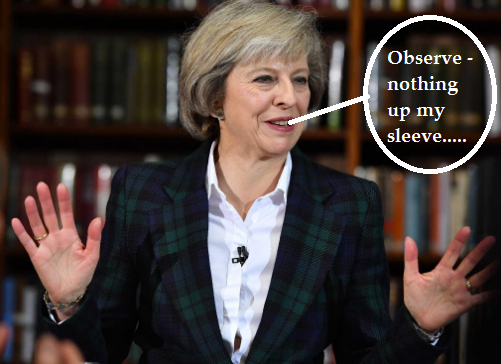 Were she ever to say such a thing, for once she would be telling the Truth. But the Prime Minister continues to suggest that it’s only a few loonies like Angela Merkel, Jean-Claude Juncker, Donald Tusk, Guy Verhofstadt, 24 out of 27 EU nations, the European Commission, Mario Draghi, the UK Labour Party, 117 Leaver Tory MPs and Whitehall who think the “negotiations” on a withdrawal agreement are at an end.

She’s confident (it seems) that – based on assurances she has received from EU colleagues she trusts – there is still room for a way out of the backstop that stubbornly refuses to stop being potentially permanent. It would be good to know who these “colleagues” are: at one point, she hinted that one such might be Emmanuel Macron. Oh dear.

The key questions to ask now are, for me, as follows:

It  don’t think a high quotient of intelligence is required to work this one out. As has been blatantly apparent since Day 1 of Britain triggering Article 50, the EU negotiators led by Michel Barnier have stubbornly refused to budge an inch on anything. Their game plan from the outset has been to run down the clock and do everything possible to ensure that the UK misses its March 29th deadline….and is thus forced to ask for an extension and/or have a Second Referendum.

A desperate EC unelected clique is doing everything in its power to save the monster it created with the launch of the Euro, and after federalism was openly established as the goal. The latter of these anthropologically unsound aims is now evoking rancour among the leaders and Peoples of Poland, Hungary, Italy, Spain, Britain and France.

Unlike the Anglo-Saxon media, the 75% Remain majority in the UK Parliament, and the globalists who can see their single buying point from a fascist power bloc at risk, the EC knows perfectly well that a clean, sovereign (and especially No Deal) Brexit would collapse its cosy – and essentially monopolistic, anti-employee – club once and for all.

The pathetic, unadventurous and hopelessly ignorant whining of the Left on who has the upper hand in these negotiations is one of many reasons why I should like to see the  wishful unthinking socialist Labour mainstream in Britain scattered to the four winds. On Sky News this afternoon, Adam Boulton gleefully regaled his colleagues with the joke doing the rounds in European capitals that the EU consists of big members, small members, and small members who think they are big members.

It was an obvious, empty-headed dig at the United Kingdom, and Boulton should be thoroughly ashamed of himself for retailing such a limp “joke”. In case our Adam is hazy  on the detail, Britain has the second largest gdp behind Germany in the EU.

This above any other fact gives the lie to the idiotic contention that we have more to lose than Brussels by leaving the sorry shambles that is the European Union.

Regular Sloggers will by now know that my preference is for an early General Election that shows the British élites how feeble, ignoble, cowardly and downright ethically lazy they are for wanting to remain with technocratic sociopaths who have perverted the original EEC for their own narcissistic ends….and bullied every member nation who dared to dissent.

However, the reality that is our whoring political class has intervened to make me sadly fairly certain that we are headed for the Second Referendum that all the Corporate totalitarians have desired since June 24th 2016.