They’re all a waste of time 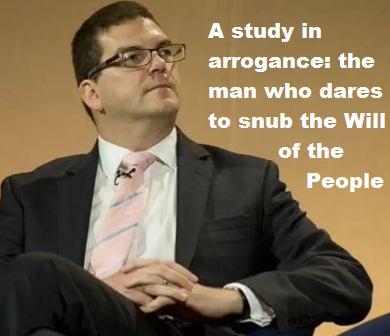 HOW 97% OF BREXIT TIME WENT DOWN THE DRAIN

Just over a month ago, The Slog began referring to the hijack of the Brexit negotiations as a coup d’état. Doubtless, a lot of people at the time took that term with a large pinch of salt, but I meant every word of it.

If the elected Executive of a nation gives the People a Referendum and promises to act upon it, it doesn’t matter if a few brass-necked legislators and puffed up Whitehall mandarins snigger and say, “Ah well – referendums are only advisory under English Law”. That betrays a thinly-disguised arrogant subservience on their part, but it isn’t Unconstitutional.

However, if bureaucrats then undermine elected negotiators, Cabinet Ministers deliberately slow down preparations, and senior Sir Humphreys both plot to keep senior ministers and Parliament out of the loop while holding unchaperoned meetings off piste with potentially aggressive and antidemocratic foreign powers….I could go on, but what’s the point? It’s illegal and its unconstitutional and – specifically on the point of perverting the course of government policy – the perpetrators are grossly exceeding their powers.

Throughout the 2016 Referendum campaign, one of the few things both sides generally agreed upon was that Brexit meant leaving the EU customs union. Brexit, said May afterwards, meant Brexit….and we would leave the customs union. Nearly three years on, it remains Government policy. But two nights ago, Oliver Robbins was overheard in a Brussels bar opining that retaining the customs union was vital.

On March 4th 2017, a cross party committee in the House of Lords concluded that Britain is not under any legal obligation to pay cash to the European Union as part of a Brexit divorce deal. They were right of course, although I could’ve told them that before they started. Yet Britain has agreed to cough up a staggering £39 billion.

Baker openly accuses the Whitehall mafia of refusing to accept Government policy. It should be enough to warrant a police investigation. Myself and hundreds of others have blogged about it. But now, Google has disappeared it – doubtless under the European Privacy Laws. To date, I do not know of a single MSM title or Cabinet Minister who has called out this blatant obfuscation by Whitehall, and then set out to make it a serious legal issue.

Now we discover that Oliver Robbins – the Putschist in chief – is so unspeakably full of himself, he talks without lowering his voice in bars about his “strategy” being to take MPs to the Wall of deadline and then say “May Deal or No Deal”. In one sense I am delighted to hear that he boasts of thus “getting the PM’s deal through or getting an extension of Article 50”, as it vindicates my analysis of what’s going on entirely. But despite this gross indiscretion (of itself proclaiming a process of deliberate anti-Government blackmail) there was no sign at all at PMQS  yesterday that the Opposition wanted to make a fuss about this on behalf of The People.

The reason is staring us all in the face: when it comes to frustrating the Brexit that a clear majority now think should go ahead (the default opinion overall seems to be “for God’s sake get on with it”) every political Party at Westminster – without exception – and all known Whitehall Mandarins want what they want.

Let’s just evidence that point, because it’s a key one too many people have missed.

The bulk of the Tory Party are neoliberal globalists.

The bulk of the Labour Party are socialist internationalists.

The SNP are Scottish Nationalists who prefer Brussels to Westminster.

The Liberal Democrats have been robotically pro-EU forever.

The DUP is an Ulster Party trading votes to the highest bidder.

Sinn Fein is an Irish nationalist Party still (despite a 21 year-old Peace Agreement) refusing to take up its Westminster seats, and therefore about as much use in this process as a one-legged bloke in a buttock-kicking contest.

The voters who won the referendum would prefer Brexit without strings. As you can see, we have two chances of getting what we want. Plus ça change.

The main weapons used in this illegal process of frustrating Brexit have been time wasting via the media of obstruction, needless day and pointless negotiating.

And so we arrive at yesterday’s PMQs in a chamber which, under what’s left of the Bagehot Constitution, has but one task when it comes to British sovereign withdrawal from the European Union: to effect it.

Once The People decided to Leave the EU, this mother of Parliaments and its globally admired civil service machine had 1,012 days to do that. John F Kennedy desegregated the South, took on the mafia, put the FBI, Texas and the military in a box, solved the Cuban crisis and got himself shot in under that time. Oh what I’d give for a JFK today, warts and all.

The first thing the Establishment did was waste 104 days thinking about how to issue Article 50 (triggering two years notice) and then a further 178 days actually getting round to passing the Bill that made it formal.

So over a quarter of the time available on the B-Day project was lost sort of warming at at the starting blocks. Losing 278 days left us with just 734 to go.

At this point, Mrs May called a Time Out in the shape of an election to “gain a stronger bargaining position with Brussels”. Actually, she called it in the hope of gaining new seats that would reduce Brexiteer influence in the Tory Party. This achieved three things: a loss of seats, credibility for a joke Labour leader, and the loss of a further 56 days in the Brexit process.

Then came the 383 days of ever decreasing circles around the plughole until David Davis went down it on July 8th 2018.

The Brussels stonewallers demanded no negotiations on an actual trade deal until the “terms of withdrawal” had been decided. It was a farcical request, given that the terms had already been set out in Article 50: when we were leaving, plus a guarantee that all outstanding bills would be paid and the status of residents in respective countries would not change. At the time, Foreign Secretary Boris Johnson in private (and once in Cabinet) pushed hard to tell the EU “there’s nothing to debate” beyond those points. He was massively overruled.

Had we ignored the EU and devoted the bulk of our time to lining up trade deals to start on March 30th 2019, there would be little or no basis for the Project Fear campaign that has continued unabated during most of the Article 50 period. But May was never going to do that, because she knew perfectly well that, were she to do so, the majority of what is essentially a Remainer Party would rebel: she had blown an election, and there was no way the fatties were going to let her blow up the gravy train as well.

She put self and Party before the People of Britain. Hold that thought.

Few Opposition leaders have spent more time asking politics wonk questions at PMQs than Jeremy Corbyn. Yesterday, Jesus of Camden devoted all five of his allocated questions to the Seaborne scandal, the sole point of which was to try and obtain the scalp of Chris Grayling. Given the emerging elements of this farcical arrangement, Corbyn may well succeed in getting it, although that seems doubtful. Either way, Jeremy has the British People confused with those who give a monkey’s chuff either way about Grayling or Seaborne.

PMQs yesterday was an open goal to demand the resignation of Oliver Robbins for gross dereliction of a duty to deliver Brexit, and a thoroughly unprofessional display of Page One indiscretion.

But had Jezzer of Galilee done that, Labour’s firm Robbins supporters (most notably Keir Starmer) would’ve walked….probably along with the increasingly ethereal New Centre Party Blairite rump. That would’ve given Cobynista Labour a genuinely existential problem.

The close tie of the Seaborne issue to the “risk” of supply problems after a No Deal Brexit made a Robbins intervention the easiest of segues for the Labour leader. Indeed, seven separate Tory, Labour and SNP members made digs about “loose-lipped men” who hang around in bars. But JC the Messiah remained silent.

He put self and Party before the People of Britain. Gosh….there’s that thought again.

It is now Shadow Cabinet policy to chop two balls off Brexit – leaving the Customs Union, and taking No Deal off the table. It is not what Jeremy Corbyn himself wants, and it is the diametric opposite of what the overwhelming majority of Brexit voters want.

And we call these people “representatives”. Whatever Jean-Claude Juncker says, the English language will always be the preeminent language of diplomacy, because no other language on earth contains anywhere near the same ability to lie with consummate ease – and then deny the lie later.

The entire Brexit process (on both sides) has been undertaken on a tidal wave of mendacity since its opening day. The Executive tells us it has been “working hard to secure the best deal for Britain”: but what are we to make of a process where the start date itself was 278 days late, and 383 days were lost debating things which should never have been the subject of debate?

But on the 384th day did the Mayflower’s captain surrender to the EU fleet, and appoint the ambitious cabin boy Robbins as her Number Two. A new period of capitulation followed, during which a £39 billion ransom was paid and most of the ground held by Davis and co lost. A deal – “Chequers” – was sold to the EU.

That used up another 156 days until the “meaningful” vote scheduled for December 11th in the British Parliament. For fully fifteen days prior to the Vote That Never Was, May’s whips told her the Bill would fail. May heard them – but did not act until the day before. The vote was put off for 37 days during which the all-important shopping and religious festival of Christmas took precedence.

The PM herself ran from pillar to post among EU capitals, and achieved nothing beyond a large expenses bill.

The eventual vote took place on January 16th, and the Withdrawal Deal was predictably crushed. That left only 72 days until Britain’s scheduled EU departure on March 29th – a fraction over 25% of the time it took the Government to trigger one single and uncontentious Article of Departure after the 2016 Referendum result.

You are here: Happy Valentine’s Day…..43 days to go to “Brexit”. No possible Second Meaningful vote until February 27th – at which point there’ll be 30 days left. Perhaps 30 pieces of silver delivered to the right places might swing it. Perhaps not.

And as I will expand later today, there’s yet another Commons “showdown” to celebrate Big-Hearted Val’s day, with five controversial amendments on the stocks waiting for John Grieving-Bercow, our pompous and biased Remainer Speaker, to duly ditch or date.