A gentle saunter through a week in which Britain continued to search in vain for the plot when it comes to issues of free speech, democracy, the facts of economic life, the realities represented by the EU, real threats to global tolerance, sovereign legalities, the rigging of the gold market, Theresa May, and life after Brexit.

This particular week gone by leaves us with precisely ten working days until our scheduled departure from the European Union. These are the enervating choices we face:

Jeremy Corbyn said yesterday that, if May introduces her “Deal” again and it fails, he will table a No Confidence motion and call for a General Election. If the Tory Party votes with Theresa the Tonto against such a Confidence motion (as seems highly likely) they will once again have put Party before Country. This is almost certainly what will happen. Here at Sloggers’ Roost, a GE is the preferred option, as we clearly aren’t going to get WTO No Deal Leave. However, as a GE is the last thing anyone except Looney Labour in the House wants, this is really just more showboating from Corbyn.

This was also the week in which The Times published a scoop about Brussels’ blackmail demands in the event of Brextension, then unpubished it in short order (and the content was completely censored by the internet search engines) and so the Age of Unashamed State News Management finally dawned, heralding in the long drawn-out death of journalism.

I was horrified to read of the 50 dead New Zealand Muslims, but dismayed to hear the braindead NZ Prime Minister say the words, “This is clear proof that Far Right extremism against international tolerance is the biggest threat democracy faces”. That was truly Orwellian in the light of 47,000+ Jihadist fanatics in Syria alone.

The idea that three nutjobs represent a threat to the planet is so fantastic as to be risible – were the tragedy not so great. The conclusions I drew were straightforward:

1. Either a tiny clutch of homicidal lunatics have set back the cause of Glasnost about Islamism by at least ten years; or

2. the neocon energy obsessives were desperate for some victims.

Needless to say, the British LibLeft is in Hate Speech overdrive: a guy was arrested in Hatfield last night for posting a tweet that said “you reap what you sow”. It’s not my pov, but he’s entitled to it without having a bunch of politicised goons jumping all over his head.

Last year in one African country alone (Mali) Islamists murdered 190 Christians – one single batch of whom involved 71 innocent female and child deaths. I truly do not remember this getting wall-to-wall global coverage….any more than the regular slaughter against other religions that takes place across Africa without Western liberals taking the slightest notice of it.

All violence is wrong and every religion is entitled to worship in Peace – unless their clerics espouse the use of violence to convert. I know of only one contemporary religion that stands guilty of that.

It was also a week in which rigged depression of the gold price accelerated, as the central banks continue their ruse of flogging the stuff to each other, thus convincing the algorithmic programs that it’s really a bear market. This AI interpretation doesn’t entirely fit with the reality that, net, those same CBs continue to pile the shiney stuff into their asset bases.

The ploy is obviously, at some point, to ban private investment in gold – in pretty much the same way as savers getting a return on their capital has become a thing of the past under this, er, “capitalist” system we’re allegedly using.

While the banksters want to snaffle up all the gold at the cheapest price possible, the markets have more money….and in the end – before they can ban the trade in it – the price will break out through sheer weight of numbers. Those who cash in on that window will probably do well; but once banned as a traded commodity, Gold will be miraculously revalued by the CB auditing fraternity, solving all their liquidity at a stroke.

Nobody will riot. All will be explained satisfactorily by The Financial Times, the Wall Street Journal and Les Echos. But none of that three card trick will stop the collapse of stock prices around the world once the credit bubble goes beyond consumer ability to consume, and blows apart the actual financial trading structures themselves.

The real problem with every important issuse these days – like debt, net neutrality, free speech, direct democracy, ideo-religious violence and real valuations in the economic system – is that nobody’s paying attention enough to form any kind of realistic opinion about it all.

We saw some truly mind-boggling evidence of this last week. Over Thursday and Friday, YouGov conducted a quantitative survey that depressed me more than anything I else I read throughout the entire seven days. In round figures, it showed that a third of the UK electorate thinks Theresa May is likeable, competent, strong and trustworthy. There are in turn a further quarter who can’t make their minds up on these personality dimensions, and in a way this latter group worry me even more: for by definition, they’ve been thinking about it…whereas the first group are probably just standard issue Southern Counties Torybots who rarely think about anything except themselves and house prices.

We all (not too deep down) grasp the utter dysfunctionality of our political, constitutional, bureaucratic and econo-fiscal institutions in Britain. But I confess, there are times when I wonder if the electorate itself is fit for democratic purpose. Whether, indeed, an awful lot of them are fit for anything.

I came across this portrait of diehard Remainer marchers during the weekend: 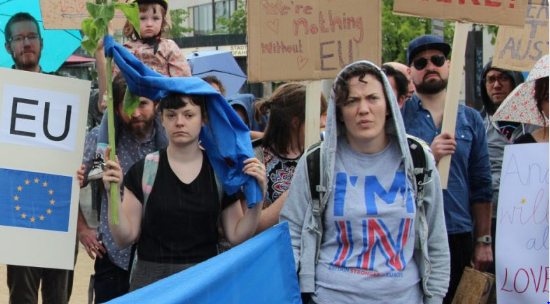 Well my goodness me, do they look like a go-ahead, go-for-it, glass-half-full, garrulous cross section of what made Britain Great, or wot?