WE, THE PEOPLE, ARE ALONE

Now that Rosh Hashanah is finished, and the Almighty has been confirmed as King of the Universe through heartfelt prayers directed Heavenwards, we can be sure that the stability of our world is fully assured by those petitions to God in favour of a happy, healthy and sweet New Year.

Whether the Brexit players are included in this assurance policy is unclear. There doesn’t seem to be any small print, but that’s because there’s nothing in writing. Frankly, I think the Goyim are excluded.

Perhaps the Times columnist Daniel Finkelstein will be OK. He wrote an article which went live just after midnight last night, pleading for Boris Johnson to “come clean” on his plans for a solution to the Irish backstop ‘problem’.

Given the nature of Irish and EU “diplomacy” these days, Mr Finkelstein should not be surprised that his article became out of date within an hour of being posted. We have the unlovely Brussels stooge Leontine Varadkar, the Incontinent leprechaun Leaker, to thank for that.

The Guardian opined yesterday that if Dublin or Brussels leaked even part of the British Withdrawal Agreement proposals “it would be a bad sign”. As Varadkar leaked the entire thing within hours, followed swiftly by the Sprouts, I think we can conclude that this is a very bad sign indeed.

There is no good faith at all – not so much as a morsel – between Dublin and Brussels on the one hand and Westminster on the other.

The time has finally arrived, I think, to summarise what’s happened under BoJo’s Premiership, and then reach a conclusion.

There is no good faith between Boris Johnson and Parliament.

There is no faith in the ethics of John Bercow the Speaker.

There is no faith in the objectivity of the Supreme Court.

There is no good faith between the thinly-diguised Revokers trying to blow up the Brexit train, and the 17.4 million people who voted Leave.

And now today – on the basis of this proposed Irish “deal” – there in no longer much faith in the Prime Minister to deliver the clean Brexit Leavers desire.

As I first suspected some five weeks ago, the Prime Minister has no real grasp of just how far apart Brexiteers and Brussels are in their definitions of ‘a clean break’ between the Disunited Kingdom and the European Bunion.

While the leaking of proposals given to Dublin are haphazard (and suffused with the usual EU dismissal of every proposal in it) one thing is abundantly clear: Team Boris is getting nowhere substantially beyond tinkering with the Irish question – ceding yet more ground – and is giving few if any signals that the 35 or more elephant traps in the May Withdrawal Agreement are being even studied, let alone rejected.

I am further bound to observe that the timescale of separation appears to be unchanged….that is to say, it will be 2025 before any real level of UK Independence has been achieved.

Independence – in the meaningful sovereign sense – is what’s at stake for Leave voters, and that isn’t on the horizon any more. For liberal democracy, however, what’s now on the line is respect for Britain’s Parliament, its bureaucracy, the Judiciary and the freedom of our ‘old’ media pack.

Parliament emerges, even among many Remain voters, as a Body that can say no, but refuses to say yes. What most of these MPs want to do is Revoke Article 50: only the Illiberal Demogogues have the brass neck to admit this….although Labour’s deputy Leader Tom Watson and his chums in Labour Remain are now openly demanding a second chance to vote that way.

Jeremy Corbyn’s position is now close to untenable. He and Watson have never seen eye to eye – perhaps it’s a split based on Corby’s passion for jam, and Watson’s abhorrence of all sugars – and Dianne Abbott is blithely announcing that, “I have always been a Remainer, and so I will campaign for Labour to Remain as part of our manifesto at the next General Election”. This is the same woman who, two years ago as Labour Revokers began coming out of the closet, told them, “If Labour campaigns for a Second Referendum, people will just ask ‘what didn’t you understand about No last time?'”.

They are, all of them, devoid of shame about their betrayal, devoid of any respect for the electorate, contradictory, ignorant about the European Union, and desperate to put off an Election for as long as possible. Honour the referendum result? These scoundrels have no honour: they are fully-bought-and-paid-for members of two Establishment élites which are – in an of themselves – diametrically opposed ideologies….except for two things: a love of power, and the unlimited access to it that the EU represents.

Some of you may know this classic Low cartoon from 1940: 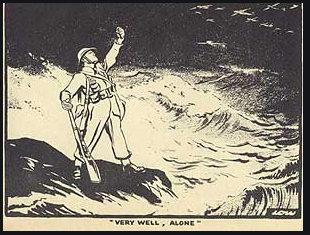 The Leave-voting electorate is now, indeed, alone except for The Brexit Party. But its leading lights have no idea how to overcome our archaic voting system (despite the fact that organised tactical voting is now a powerful reality) and it is clear from his past that Nigel Farage has no interest at all in taking monied donations out of politics, reforming financialised capitalism, or realising intelligent alliances with other Brexit or Waspi/2020 groups. Finally, they are solely interested in Brexit. And this fight is no longer about a thing variously called “Brexit”.

It is about making Britain neutral in the deadly neocon alliance system, and focusing more on export high-margin marketing supported by a well-trained and rewarded population of skilled artisans. It is about strict immigration controls, and an end to appeasement of intolerant belief systems. It is about re-establishing excellence, free thought and healthy doubt to our system of education. And it is, perhaps above all, about reestablishing a shared cultural belief in the greatest fulfilment of the greatest number against common, Big Process Internationalist enemies of personal freedom and responsibility.

Is such a thing really achievable in Britain without taking a much broader view of Europe’s future as a whole?

In the last twenty-four hours, I have reached the conclusion that the answer is a firm No.

There is too much – the Irish, the Scots, the unelected and the ideologues, the NATOs and the Verhofstadt-Mogherinis, and the Leftlib ignorance – ranged against us.

The Battle for British Independence is temporaily over. The struggle for national self-determination across Europe will continue. I am – we are – bloodied but unbowed.

I leave you with this one thought: keep your eye on Steve Baker MP.