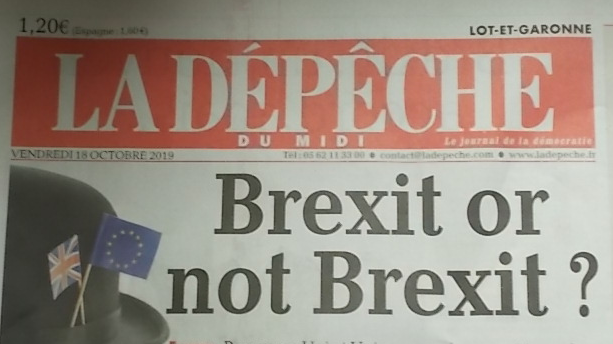 Today’s front page of the French tabloid La Dépêche leads with a headline translated (for once, accurately) into English. But the media here are asking a different question to that of British Brexiteers. The Slog analyses where we are….and aren’t.

The detailed extended summary of the new October 2019 Withdrawal Agreement has now been made available. I am leaving this post up for reader information, but having read the WA in fuller form from the Horse’s Mouth after posting, I think most Brexiteers will view the agreement in a different light to the opinions expressed here. A new Slogpost will appear tomorrow morning.

A saga almost as long-running as the Agatha Christie play The Mousetrap may or may not be about to show the Final Act’s twist….or as the French would have it, dénouement. But the headline above in a way shows just how far apart mainland western European and British citizens are on the Brexit issue.

Of course, the two are hugely related questions: but the Weltanschauung driving the queries are chalk and cheese. The former is largely about amicable self-interest, the latter about genuinely independent self-determination in a blocist world; the former would be Neville Chamberlain’s view of the Munich Agreement in 1938, the latter that of Winston Churchill and his small coterie of admirers.

OK – that’s enough throat clearing: there follows what is (I hope) a balanced view of what Team Boris has achieved. As the overture to that, below is an attachment I put up on Twitter yesterday afternoon as a sort of catch-all caveat re the announcement of “a deal”:

Contained within the above ‘KEEP CALM & CARRY ON’ poster were a couple of significant developments worthy of recognition.

First and foremost was the decision of Jean-Claude Juncker to state openly that, in the light of the deal, the Commission would not grant a further extension if it isn’t ratified by the House of Commons this weekend.

The evidence suggests that it was Boris personally who asked for this as the quid pro quo for him in turn being prepared to ditch DUP dealbreakers. It has Dominic Cummings written all over it as a ploy; but whoever came up with this matters little….it was a genuine stroke of genius.

As a result of it, UK Article 50 revokers stringpulling behind “our only concern is for correct process” have had their G-string ripped away. Their beloved EU likes the deal, and the deal appears to be amicable, so what’s your problem? And by the way, if you don’t buy the deal, it’s No Deal….to which you are (allegedly) irrevocably opposed.

Collapse of anti-democratic plot to defy The People.

However, the second reality is one for Brexiteers to mull over. If Barnier and co are being so smiley-happy about the deal itself, should we not be very, very afraid?

As always when dealing with Brussels, the Devil is in the detail.

I have not had sight of the full text – has anyone? – but I’ve read reliable analyses that suggest some gains have been made in areas beyond the Irish border:

This is a lot less than I would have wanted, but it does represent a very clear acceptance by the EU of a British desire to have an independent trading policy.

Now let us examine what I call the ‘Steve Baker factor’. I have for some time now seen this Tory MP as a good weather vane as to what is or isn’t Sovereign Brexit.

He belongs to the 28 Eurosceptic Tory hardliners. But so far, they have not said “no” to Boris Johnson’s Brexit deal. The group – increasingly referred to as “the Spartans” – has indicated several of their number (from Peter Bone to Andrew Bridgen) will very likely vote for the BoJo Agreement.

Baker himself tweeted yesterday lunchtime that ‘If we vote for this agreement, after dealing with limited remaining concerns, we will also see through the implementing legislation to completion. Provided it is not adversely amended’. He also RT’d Juncker’s zero-extension commitment.

Call me wacky, but I suspect the ERGers will largely support Bojo.

So much for the good news.

For myself, there are still things that stick in the craw.

Chiefly, these involve the ridiculous financial undertakings to which we remain committed. Specifically, the €39 billion euro blackmail payment…and generally, the outrageous EIB departure deal to which I referred last week.

However, I am increasingly coming to see these undertakings as the price we have to pay for our future sovereign independence….and something the electorate should remember when voting next time around. For they are, above all, the legacy so generously left to us by Theresa May and Philip Hammond.

Other legacies have involved those of Tony Blair (€8bn of EU refunds and £22bn wasted on Connecting for Health) and David Cameron (£88bn on HS2). Legacies that lie ahead under the Corbyn/McDonnell/Cooper/Thornberry madness include voting rights for all migrants and welfare increases well in excess of £200 billion….none of which is budgeted.

All things are relative, and as always our choices are confined to the least horrible options on offer.

Tomorrow in Parliament will be a defining event for our raucous, narcissistic and increasingly diabolical epoch.

Do read the post linked below for a clearer and more broad context for Brexit….