Faith may move mountains, but it is unlikely to give you a firm steer on business model bollocks, bank sustainability, or bigged up viruses

Just over two years ago, I wrote this Slogpost on the subject of the Magical Mystery Metro Bank: 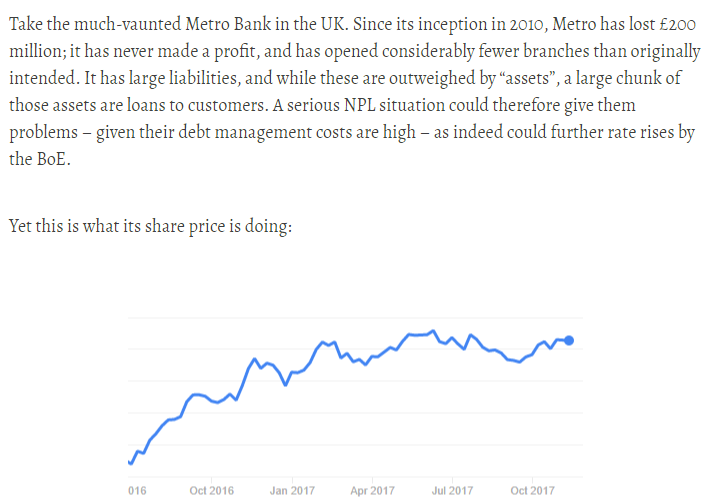 A market far too blasé about Metro’s debt ignored the obvious flaws in the business model. This week has seen the inevitable outcome.

A £900 million accounting “glitch” haha is being investigated by the Financial Conduct Authority and the Prudential Regulation Authority. There’s been a main Board purge removing chairman Vernon Hill, his wife’s architecture firm and her £20 million bill for  “branch development”. (Nepotism Rules, OK). A cash-call rescue of £375 million at £5 a share is under way. And chief executive Craig Donaldson has been summarily booted out.

The posting of two years ago here followed a request I made of my pension trustees to get all funds of mine they hold there out of the bank. They assured me there was no cause for concern. Earlier today, I converted the request into an angry demand. I then received a “secure message” saying they had replied. I logged in “securely”. There was no reply.

Be prepared, as the cliff approaches, for more of this kind of thing.

There will be ‘glitches’, sites ‘going down’, ‘temporary failures’, ‘unknown errors’ and all the rest of it.

But mainly, there will be IABATO – It’s All Bollocks And That’s Official.

Further to yesterday’s Slogpost, there’s not much trust in our financial and regulatory institutions left among the thinking electorate, but most of it is about to be vapourised as the Four Clippity-Clop guys in black ride towards us at full pelt.

Earlier this week, the profoundly unloveable Jamie Dimon told the media that his personal fiefdom JP Morgan Chase would itself be exploiting the US Fed’s dwindling loan support for the roughly 100% of US banking firms who are leveraged multiple light years beyond salvation. Over the years, Dimon has time and again presented JPMC as the most solidly 5-star, 24 carat, blue chip, rock-solid, unsinkable Biggo Banko in human history.

Which is of course the sort of BS spin the White Star Line spun about the Titanic.

I don’t make this stuff up, yer know: but on the other hand, I am not the world renowned ace reporter hero Slogscoopman, fount of all knowledge and scourge of financialising Metropolis. It’s just that – unlike most people – I retired early and thus have the time (lucky, lucky me) to check out what reptiles like Dimon say. There are thousands of others doing the same thing; you’d do well to check them out.

What all such nonsense comes down to is faith in the competence, creativity, motives, and honesty of the people pumping out the BS. Or rather, why it’d be better if you didn’t have any faith whatsoever in any of it.

Weirdly, this is not a joke story. Indeed, it is the sort of affirmative action we clearly need in fighting this deadly, ghastly, hitherto unimaginable and ruthless germ that is going to cull at least 112.7% of us.

We must show no mercy to either virus or victim: shoot the bastards. Come on….emerge from behind your namby-pamby liberal Conran sofas and admit it: you know it makes sense.

I have penned advice to Number 10 this post-noon, suggesting a shoot-to-kill policy for all those truculent COVID19 malingerers indulging in attention-seeking attempts to succumb to the virus as per media instructions.

Come Hell or high water, we shall halt the onward march of fundamentalist Covidism. Let us now bind together, take the Rule of Law into our own hands, steel ourselves to our task, and engage in a disciplined display of indiscriminate killing to protect the strong from all those sneezy-wheezy wimps across the planet.

And, um, while we’re at it, why not err on the safe side, and isolate people for 28 days as opposed to 8? Just a thought.