100 lines for Muammar El-Gadaffi from Hague 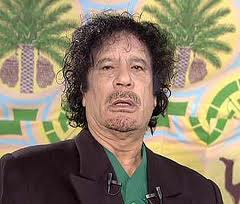 Portrait of a British ally

After expressing ‘grave concern’ about the actions of the Bahraini royal family last week, William Hague told the media he thought Libyan actions against its own people were ‘undermining the credibility of the Gadaffi regime’.

With every broadcast Hague soundnibble over the last eight days, I have been praying for him to just be quiet….rather like he has been, in fact, ever since the EU’s currency started sliding to Hell even more quickly than ours. However, I think it is fair to say that, in discussing the Gadaffi regime with the use of credibility as a dimension, Willy has finally eaten his way through the bottom of the barrel, and found his nose snuffling about in the unpleasantness below.

Gadaffi’s regime planned and bankrolled the most heinous attack on a civil aeroplane in history. When they saw a chance for the bomber to get home, they gave solemn promises which were broken the second Meghari touched down on Libyan soil. Himself a schizoid psychopath, the colonel is the most visibly disturbed of all the world’s lunatic fringe leaders – a man every bit as obviously mad as Hitler was.

Libya has been courted because it had bases from which to attack Saddam Hussein, another maniac tolerated as long as he kept on attacking Iran, but shocked by awe the second he seemed to bear some racial and religious resemblance to the sons of Islam who crashed themselves into the Twin Towers.

Cameron’s been in Egypt today, probably inviting them to join the EU. He was ‘the first foreign leader to visit Cairo’ gushed the BBCNews website. Why?

They are Cannon & Ball, these two: hair-trigger Dave and invisible Willy. They are two useless Community Police Officers, personifying the naive and pompous irrelevance of the British Government better than anything else we have. But like all Plods, you can never find one when you need one.