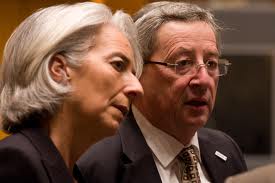 Ms Lagarde points out that M. Juncker’s plan is upside down

Plans R Us in the European Union this week. Following the ‘Grand Master Plan, Details to Follow’ of last Sunday, Radio Luxembourg proprietor and Father of all his 497,584 people Jean-Claude Juncker has just been asked if he has a plan. And as luck would have it, he does. It’s a 10-point Plan, and this is it:

But whatever you do, don’t release it if it’s not possible. It works for me.

2 – “Ascertain the sustainability of Greek debt, otherwise we have to think about other steps that we can only take if we have given thought to all the consequences of those steps — to those outside Europe as well.”

Nope, sorry there Jean-Claude, you lost me on that one. Bit hazy on the other steps, consequences, and this ‘outside Europe’ place. There’s a lot of Outside Europe.

3 – “Strict continuation of course of budget consolidation, with automatic sanctions for repeated failures to meet budgets

Now that’s a genius idea: a disguised tax on every EU Member State, none of whom ever met a budget in their lives. This could be the bazooka we’ve all been looking for.

4 – “A road map toward bank recapitalization. The under-capitalized banks have to first try to get refinanced on markets. If that does not succeed, states have to consider whether they can jump in to make available the necessary capital.”

This is revolutionary stuff. I need some time to absorb it all. And figure out where the money’s coming from.

Tax payers should get dividends for rescuing banks.

Uh-huh. Like, they don’t cheat us out of our own money twice, you mean? It’s a step forward.

“We cannot simply hand them the money. We need to make sure that those who provide capital in whatever form are also represented in the decision making bodies — in the supervisory board, the board of directors, in management — and that we participate in the profits.”

Blimey. Nationalised banks with worker-directors. That should play well in Washington.

I think you’ll find Senor Barroso is ahead of you on this one. Also the banks will never buy it, because it means they have to pay out some money. Banking doesn’t work like that. This is a whole different model you’re suggesting here. Think carefully about it – and canvas opinion. Bob Diamond would be a good person to ask. Geli Merkel’s not keen, though.

Sounds good to me. But might it be a tough ask given the IMF and Frau Merkel just told them all to sell their shirts? And what do we do about this pesky euro thing? It’s hellish expensive you know. Just a thought.

7 – “A different tone in Europe on budgets. It is not acceptable that European Union countries are divided into those who give and those who take.”

Well, that’s France buggered in perpetuity. Although I just spoke to George Osborne, and on behalf of the UK he says, “Where do we sign?”

Whooooa there cowboy…..regulation? Ever try to regulate a game of chess in a madhouse? It’s fun, but pretty soon all the chess pieces disappear, and there’s a new game called Polish Roulette with Six Full Chambers. I wish you well with this one J-C, but watch out for the Grassy Knoll.

How about we demolish the madhouse, and start again? No? I guessed not.

Right on. Buy them? Bribe them? Shoot them? I think this is a More Details to Follow subject, Jean-Claude. But you’ve made a good start.

10 – “We need an economic government. I’m delighted that the number of those supporting this idea has grown rapidly.”

You’re a man after my own heart. If there’s one thing I see as the cancer of our age, it’s uneconomic Government. For as you know – and it’s obvious you do know, given those ten points above – uneconomic governments borrow more money than they can pay back because they’re too busy sharing out the money, and administering stuff, and passing laws. And making plans.

“Life is what happens to you while you’re busy making plans”. (J. Lennon)

Related: Merkel & Sarkozy don’t have a plan…but does Mario Draghi?

Merkel is in clover, but Sarkozy is in jail.

The Importance of being urgent.