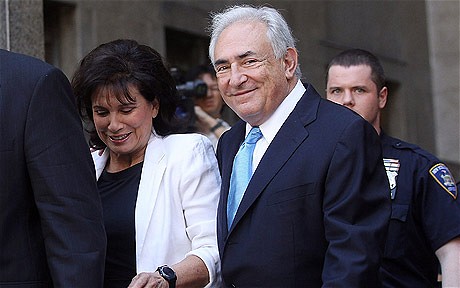 While it may be, in some areas, short on explanation, the DSK affair is not short of new twists and turns. The latest news emanating from France is that the Franco-American link in this case is as strong as ever…however, new revelations suggest that the former IMF head may have supplied his own rope for the hanging….and attached his appetite to promises of French Government contracts.

Expliquer l’affaire DSK, c’est pas de la tarte. And as time goes on, it gets murkier. What, for example, was a senior executive in a subsidiary of French construction giant Eiffage doing pimping for Dominique Strauss-Kahn? David Roquet allegedly used his corporate expense account to cover part of the bill for evenings with prostitutes in Paris (at the Aventure nightclub) and the luxury Murano Hotel during 2009 and 2010. According to investigators, Roquet filed expense claims for the evening marked with Strauss-Kahn’s initials “DSK”. That means somebody above him would’ve been happy to sign off expenses marked in that way.

What sort of ‘medical equipment’ does Fabrice Paszkowski sell in his ‘specialist store’? Paszkowski has also been arrested on charges of “aggravated pimping” (supplying women for sex). He is suspected of accompanying Roquet on trips to New York with prostitutes for DSK and others. But as yet, there is little information tying Pazkowski to Roquet.

However, Jean-Christophe Lagarde (is he related to Christine?) was, until his suspension last week, head of ‘urban security’ for the Nord administrative region that includes the city of Lille. An ambitious senior civil servant, Lagarde believed that ‘by cultivating a close relationship with DSK he would have an important role in a future Socialist administration’ – according to one unnamed source quoted in the French daily newspaper Libération.

So then: is this a sex-for-influence scandal? And if so, why did it have to extend to New York? Ostensibly, all these characters went to New York during 2010 and 2011 to discuss ‘security matters’, because DSK was about to announce his candidacy for the French Presidential elections of 2012.

“I understand the cops are quite clear as to what Roquet or his employer Eiffage hoped to achieve by feeding Strauss-Kahn’s voracious appetite for women,” a Parisian source told The Slog this morning, “but not why Roquet brought in Pazkowski and Lagarde to help.”

The French Leftist media today is full of “I had no idea what a monster he was” bollocks, but the degree of sensory disablement required to miss this side of Dominique Strauss-Kahn’s life would have to have been on a par with the Murdoch family’s inability to grasp endemic phone-hacking at News International. Meanwhile, one is left pondering what the corporation Eiffage hoped to gain by this behaviour. The company issued a  statement last night denying all ‘insinuations’, but the link between them and Roquet is a fact: and three hours ago, Le Parisien ran a piece saying that David Roquet had incriminated Eiffage in his testimony to police.

Not too much pondering as to corporate motive is required, however: Eiffage is a construction group specialising in public sector projects. It is a 13 billion euro turnover group which built, among other things, the world-famous Millau Viaduct, the A65 Pau-Langon autoroute, and the National Police Headquarters. (Eiffage’s corporate slogan is ‘talent in harmony’. Hmm.)

What intrigues me is that the last trip to New York by these three procurers ended the day before DSK was arrested for the alleged assault upon Nafissatou Diallo. I’m intrigued because – let’s face it – if you were keeping the Head of the IMF under surveillance, with this entourage of pimps and hookers, it wouldn’t have taken much brainpower for a security agency to work out how to ensnare Strauss-Kahn. Indeed, your main problem would’ve been slotting in the jailbait between the hordes of other women servicing DSK in one way or another.

So more exactly, this is beginning to look like a sex-for-projects scandal….with the police involved on a grand scale. The Parti Socialiste will of course distance itself from this as much as possible. But graft at this level and with such a depth of grubbiness has a habit of  involving rather more people than at first thought. Crucially, it adds a new dimension to the DSK affaire: that of a man not only addicted to constant sexual conquest, but also very probably happy to use his Presidential powers to feed the addiction.