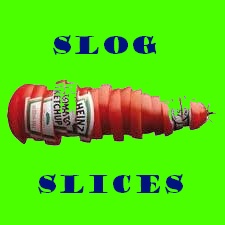 Dave has been getting his sums wrong again. It’s just four days since he called the UK IMF contribution “a maximum of £10bn”, and now those nice people in Brussels have presented Squeaky the Draper with a bill for £25billion.

An EU official has told the Torygraph that the UK’s eurozone bazooka bill will be €30.9 billion (£25.9 billion). This is the same as France is being asked to pay – which does seem a bit steep given we’re not even in the euro – and makes one wonder if Nico Sarkastic will be contributing to the one further down the line, when it arrives here.

A Tory backbencher told the Slog over the weekend that the EU cough-ups are now greater than the Coalition cuts, and I don’t doubt it – they certainly were during 2010. But I note another eurosceptic is using the same form of words in the Telegraph post, so this is clearly the on-message message for the day.

The entirely democratic and ever EU-friendly Recep Erdogan has been at it again. I am indebted to a German slogger for pointing out a few more examples of how the Herdi-gerdigan is getting increasingly out of his tree now that most opponents have been locked up.

Recep has called upon the French President Nicolas Sarkozy to prevent the adoption of a proposed law by the French Parliament recognising the mass killings of Armenians during the First World War. He warned of serious consequences should France disregard his demand. Additionally, Turkey would recall its ambassador from Paris. The new law would make it a criminal offence in France to dispute the genocide committed by the Turks on about one million Christian Armenians. (Witnesses to the atrocities included T. E. Lawrence).

Erdogan’s Foreign Minister Ahmet Davutoglu is especially hacked off, telling the Turkish media that “Not just Israel, France can join the kneeling line, for it, also, has  offended the worlds greatest walnut exporter. Israel is “kneeling down” only to open the oven and add gravy and seasoning to the roasting Turkey. It’s been getting a little dry in there lately.”

Beware of Turks carrying walnuts while uttering liquidised metaphors. Davutoglu was responding to claims by the remaining Turkish opposition that Ankara has shifted its policy towards the East, despite its dependency on Western countries. Somewhat hard to deny that, which is perhaps why Mr Davutunglued decided to veer off a little and talk about Christmas culinary matters. Christmas Turkeys, I’d imagine, are not big in Tel Aviv.

Perhaps Dave should ask what the Turkish PM’s views on the Holocaust are. After all, Dave’s all for the Turks, and dead set against Israeli concentration camps.

Spanish PM-elect Mariano Rajoy, will present his tough austerity programme to the legislature today and tomorrow. Rajoy, who defeated the Left by promising to eliminate “superfluous” spending, has yet to explain what this superfluous spending is, given that Spain has already emptied its social welfare and pension budgets for the coming year. To say that spending cuts may tip the stagnant economy back into recession is a bit like asking if Recep Erdogan rigidly eats only kosher.

“The evidence so far is that austerity isn’t working,” said Phyllis Reed, head of fixed-income research at Kleinwort Benson Bank in London, which manages $7.8 billion. “We’re in this absurd situation where the countries that have cut the deficit the most have seen their bond yields go up most.”

Oddly enough, austerity isn’t working here in the UK either. But as in Greece and Italy, a big reason for this is that established oligarchies like civil servants and trade unions have been chucking sabots into the Osborne tanks since Day One. The other reason (and here’s where it gets really spooky) is that – see first item above – we’ve wiped out our cuts by, um, bailing out Greece and Italy. Italy in turn wiped out its small budget deficit by bailing out Greece.

On arriving at the IMF, Christine Lowgrade asked about a bit (the way you do) and soon found a sizeable minority of the loan-provider’s senior staff asking why they were forcing austerity upon countries whose economies were already ploughing through mud with lead boots on….as well as suffering all the cultural problems noted by The Slog yesterday. So it was that Chrissie did a volte-face, demanding stimulus alongside austerity as a kind of Third Way. The rest is mystery.

Austerity is without doubt the best medicine when the economy is healthy and the public finances are in a degree of disarray. None of the ClubMeds obeyed this obvious rule, and we Brits started obeying it five years too late. Daft Labour was thus followed by equally daft Camerlot. I’ve said it at least a hundred times, and shall continue to do so until every banker on the planet has been suitably boiled in oil: debt forgiveness is the only solution, and yet to date it is the only thing we still haven’t had. There is a vague promise of it for Greece, but nobody has, as yet, confirmed even that.

Debt forgiveness requires moralistic Sovereigns (like Germany and China) to lose money, and for reckless lenders to take an enormous – in some cases fatal – hit. Those lenders are mainly bankers, and they would rather democracy failed, social chaos destroyed parts of Western social infrastructure, and the poor starved, than take even a scintilla of responsibility for the mess they helped create.

This is the ultimate dilemma we face: the banks have the most to give and the most to lose. But the longer they steadfastly refuse to join in with the mea culpa thing, the more expensive it all gets, the more CDSs get issued, and the more completely they will, in the end, be wiped out.