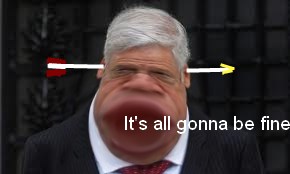 The site greekcrisis.net summed it up two weeks ago: ‘large bondholders say the take-up is likely to be high, if only because the alternative of a full-blown Greek default is so bad’.

However, the key words there are ‘large bondholders’. These are, on the whole, the big banker guys with a lot to lose from Greek default: many of them are the same guys from ISDA who last week voted against seeing an open-and-shut case of bond-issuer default as a default. It was a case of turkeys voting for the abolition of Christmas. But the markets are not about to abolish it.

Yesterday, the pessimistic view came from London. The Daily Telegraph financial columnist Louise Armitstead wrote that ‘Authorities in Athens are ready to enforce the controversial collective action clauses, or CACs, to impose the restructuring deal on all bondholders as the number of voluntary agreements look set to fall short of the required amount’. And the influential Open Europe website’s Raoul Ruparel opined that, “Greece is likely to struggle to reach the targets for a voluntary agreement, so the credit rating agencies are almost certainly going to see this as a default.”

This makes for a stark contrast with the remarks of IIF negotiator Charles Dallara (above right), who yesterday pronounced himself “quietly confident” of the swap going ahead without complications.

Clearly, they can’t both be right.

There are a number of other players involved apart from the instituions Charles Dallara claims to represent. The hedge funds are said to have anything from $10-$50bn of exposure in terms of Greek bond purchases. To make a decent profit, they need a default. Some of them already feel screwed by ISDA: they’re not in the mood to compromise. As I keep on saying, nobody knows what these guys will do – or even whether their holding is,say, $12bn or $52bn.

Then there is the US Fed, and the White House. They are, respectively, out to protect the US Dollar banking hegemony and the President’s electoral chances. They’re worried about other stuff too: the raw materials in the Med and the Aegean around Greece; military bases from which to contain Islam; and the access to Cyprus as a friendly mid-Med island….especially after today’s Turkish opportunism on the sovereignty issues there.

I retain a confidence in my sources. They say that the US has what it sees as a deal with the EU: you dump Greece and grow a firewall to protect all the banks, we help you prop up those banks. Of course it is typical of the Americans to think they can reliably plan such unpredictable outcomes to protect themselves: but that there IS a plan, I have no doubt. Whether it succeeds or not is another matter.

The Fed will have an armlock on some of the IIF members. Charles Dallara will be aware of some of it. But all of it? I doubt that. Deals will be done and promises made to ensure that American will prevails. But will it prevail over fear?

And of course, there is the patriotic German contingent in Bankfurt….along with Schauble’s Finance Ministry, the FPD, senior CDU members nervous about German debt exposure, and the ultimate successor and survivor, Chancellor Angela Merkel. Far less of their institutions hold Greek bonds than did so four months ago – and all of them are either sandbagged by Draghi money, or buoyed up by Berlin guarantees. They too can be persuaded to do Berlin’s bidding. In many cases, that is exactly what they want to do anyway. For them, the deal is some short-term losses versus the long-term financial viability of Germany.

It’s a no-brainer, especially for the likes of Bundesbank boss Jens Weidmann, who yesterday again demonstrated Bankfurt’s determination to limit eurozone losses. In a letter leaked to Mario Draghi at the ECB, Weidmann made his diapproval of both LTRO and the separate ECB bond deal with Athens abundantly clear.

The news leaking in dribs and drabs from Athens yesterday was that the Greeks themselves are pessimistic about bondholder take-up being enough to keep the deal voluntary. Everyone has until Thursday to sort that one out. Don’t be surprised if, during the week, a new bondholder offer is forthcoming. Because – and one shrinks from saying anything with certainty about this circus any more – if the CACs have to be used, then compulsion is obvious, and it’s a full-blown default.

Remember: we’re talking about escrow monies, only half of it having been approved, and almost none of it going into Greek hands. This is 130bn euros that could be rapidly redeployed elsewhere in the eurozone if enough powerful people decide that Athens is beyond help. I think most of those people decided that weeks ago: I still think they have every intention of letting this deal unravel, having now taken all the steps they can to contain the likely tidal waves resulting from that. I still think that – even if by some circuitous reality alteration – the bond swap proceeds, elements within the default-planners will ensure that Greece goes down anyway.

My suspicion remains that toing and froing will continue into next week, and then – ‘reluctantly’ – the eurozone will kiss Greece goodbye. But anything and everything can go wrong in a war, and be under no illusion: this is a war for survival. I am fairly certain that the US/EU axis have no idea just how surely they are kissing their asses goodbye by playing these games, because the one element they still seem unable to take on board – widespread civil unrest and potential revolution among the ClubMeds – is going to wind up deciding far too many things in the end  – as it always does.

Last night, Lucas Papademos said resisting the austerity measures in Greece would “set the country on a disastrous adventure” and “create conditions of uncontrolled economic chaos and social explosion”. Along with boils, a plague of locusts, and a collapsing sky. It’s bollocks, naturally, but the sheep have to be nipped into the pen. A poll of more than 1,000 Greeks for the Kathimerini newspaper yesterday found that 67% said a return to the drachma would make the country’s situation worse compared with 13% who believed the country would be better off with its own currency. But that’s what happens when you ask a bunch of people their opinion about something they don’t understand: Greece would, in the medium term, be far better off without the euro. And contingency plans for a return to the drachma have been drawn up in Athens, Berlin and Brussels.

Anyway, today is Monday. The participants have between 70-80 hours to get their various ducks in a row. Whether those duck will fly – or simply be shot in a barrel – will be much clearer by next weekend. Stay tuned.