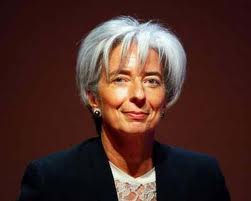 Who is Cristine Lagarde really working for?

Over many months during 2011-12, The Slog painstakingly put together a massive body of evidence pointing clearly to the fact that the US weren’t comfortable with Dominique Strauss-Kahn either as head of the IMF, or potential President of France. Equally, I spent many hours talking to those involved, and tracing career progressions, in a bid to establish that Christine Lagarde was being groomed as the head of the IMF to replace DSK once he’d been framed….and that she herself was probably fully aware of this.

She was the perfect choice for the US Fed and State because she looked and sounded French, but was emotionally wedded to America. She was and is (as Tim Geithner remarked in private) “Our gal”.

Unknown to many of those involved, while former lawyer Cristine Lagarde became the Foreign Trade Minister of the government of Dominique de Villepin, a few years previously she’d been defending the interests of US multinationals to the detriment of French companies. She was, in fact, a member of the CSIS – the think tank of the oil lobby in the United States….the Center for Strategic & International Studies (CSIS). She co-presided over the Action USA/UE/Poland commission of this think tank along with Zbigniew Brzezinski and was in charge of the USA-Poland Defense Industries working group (1995-2002)

In 2003, Christine Lagarde became involved, as part of her CSIS position, of the Commission for the Expansion of the Euro-Atlantic Community along with her friend Brzezinski and others.

Thanks to the contacts established by Christine Lagarde, Bruce P. Jackson, founder of the US Committee to Expand NATO – who represented the interests of the aircraft manufacturing company Lockheed-Martin – signed the contract of the century: the sale, in April 2003, of 48 F-16 Lockheed-Martin jet fighters to Poland for $3.5 billion – completely blocking out EU contractors. (At the time, the European Union was heavily subsidising the Polish government’s agricultural sector).

Cristine Lagarde followed Nicolas Sarkozy into power in 2008 as Finance Minister. As such, she represented the candidate that both he and the White House wanted: Sarkozy is an outsider in French society, an Atlanticist with strong links to Jewish banking, and himself related to Jacqui Onassis-Bouvier. One of his last acts as President before last year’s abortive attempt at re-election was to have a three-hour private meeting with Lloyd Blankfein, the CEO of Goldman Sachs.

Following the demise of Strauss-Kahn in a New York encounter with maid Nafissato Diallo, Lagarde waltzed effortlessly into the IMF post, a feat managed minutely by US influence in South America – see earlier links for evidence relating to this.

Then earlier this week – as The Slog reported – Lagarde stated that, as the head of the IMF, she wouldn’t participate in the Cypriot bailout – insisting that the ESM must bail out the Cypriot Banks directly. Her insistence is, of course, based on the certainty that Berlin will never agree to it. The geopolitics of this are simple: an EU stranglehold on Cyprus is a direct threat to American hegemony in the eastern Mediterranean.

So when she makes supportive statements about the EU (when speaking at the World Economic Forum in Davos) two other guests there – David Cameron and George Osborne – should have the discernment to realise that Cristine Lagarde doesn’t have eurozone interests in her heart. Her ambition and wallet are connected to the US.

Let’s hope Cameldung and the Draper do know this. My previous experience of our chaps at the FCO, however, leaves plenty of room for doubt.

Yesterday at The Slog: between the lines of Dave’s EU speech

“Yes, of course, the European economy faces many challenges, many issues that have to be addressed but destiny comes through the smoke and the fog and I. for one, am optimistic about Europe’s future.”

Chrstine Lagarde, the head of the International Monetary Fund, was speaking at the World Economic Forum in Davos. She was optimistic about the future of Europe as a whole.