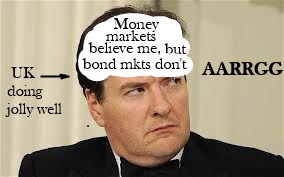 It’s a crock for a hardface

The 10-year yield on British gilts went to 3.083% last Friday, more than double the record low touched in 2012 – and a full percentage point above where it started the year.

So despite the Tsunami of bullsh*t emanating from Nobsore the Draper about Britain’s bright future as the Strong Man of Europe, the cost of UK borrowing went UP as opposed to, um, down. Er….if things are going well (and the markets are on board with the Party Line) then yields are supposed to go DOWN, as opposed to, er, up.

And here’s another unintended consequence of snuff drivelled from the Dispatch Box: the pound has hit its highest level against the US dollar for nearly two-and-a-half years.

So tell me then, financial MSM press, what first made you think Britain could become a low-borrowing cost cheap currency exporter?

The same thing is happening on the other side of the Pond. Liam Halligan at the London Daily Telegraph remains one of the few commentators upon whom one can relay for an empirical analysis of reality. This is what he has to say:

‘On Friday, the 10-year US Treasury rate moved above the psychologically important 3pc threshold to its highest level since July 2011, in part due to the prospect of lower Fed purchases. This yield, up sharply from 1.8pc in January, is the benchmark for interest rates across America and much of the global economy.

That’s alarming given that Western governments and households are generally far more indebted now than when QE began. If the gradual withdrawal of extraordinary monetary measures backfires, debt markets rebel and government yields spiral upward, the economic fall-out would be horrific.’

The man is not wrong.