I never cease to be amazed at the ease with which weather forecasters change their minds with insouciant aplomb. But equally, I’ll never grow tired of how interesting the skies are here. Lot et Garonne can change from pleasant heat and deathly-still quiet to rampaging tempest in a matter of minutes.

This shot shows the gathering storm that appeared, chucked a celestial bath of wind and water at us – and then left as abruptly as it had arrived. 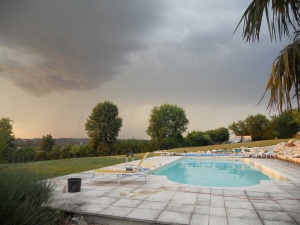 And this screen capture illustrates how the short-term forecast changed during the day: 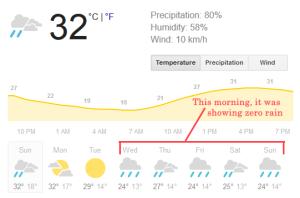 So, not far out then.

Look, I’m the first to accept that wind speeds and directions can cock up a forecast – and there’s not a lot any mortal can do about it.

But we’re talking a whole new weather front here: we’re talking drought become deluge. This is going to f**k up a lot of people’s lives. But the forecasters – do they really deserve that soubriquet? – simply change their little pictures and carry on taking the paycheck.

Let us move on from physical to metaphorical storms before I really go off on one.

I wonder how many of our viewers spotted that the two central players at Deutsche Bank bowed out in haste today. On a Sunday. The way you do. Deutsche has long been fingered by myself and thousands of other commentators as the most derivative-bet exposed bank on Earth. Greek default would (I am reliably assured by insiders) bury DB for good.

I wonder how many of our viewers at home noticed that Austria formally (ie legally) abandoned its EU commitment to honour the first E100,000 of every bank account holder last month.

I now find myself confused on this question of bailins: eleven EU Member States are under pressure from the EC to ‘fall in line’ on the new bailin template devised by Drivelboom the Dutch Cap. The countries are Bulgaria, the Czech Republic, Lithuania, Malta, Poland, Romania, Sweden, Luxembourg, the Netherlands, France and Italy.

But the EU also has a ruling that states all banks must give depositors at least E100,000 of their money back.

So Austria has legally dumped this commitment illegally. It has formally reneged on the promise to which it was formerly committed.And the EC is encouraging all member States to get a move on and pull the same illegally legal stunt to change the former into the formal.

I suppose all this must be part of the Grand Plan to turn savers into creditors, and thereby warn them that whereas customers are entitled to keep a hundred grand, creditors must realise that the value of their investments may go up, or perhaps down the toilet, never to be seen again. We are, I fear, watching the stunts of those in the punts whose identity rhymes with Hunt.

What will we all be next? We used to be electors, but perhaps now we shall become approvers. We used to be citizens, but maybe from here on we’ll all revert to being subjects again. The feminists will be pleased: they’ve campaigned to be objects no more, and so victory is theirs.

And finally, I sat down in the TV den last night armed with the silly delusion that I would be watching the Champions’ League final live and free on ITV. It looked to me like a lively encounter, and indeed it turned out to be, allegedly, the best final in years. But I didn’t see any of it. What I saw was a black screen declaring ‘No signal’.Could it be that ITV has attracted the eclectic bordering on universal wrath of the Sino-American Australian Ropey Turdoch? Or is it just that the Digger Toff has once more changed the orbit of one of his satellites, thus requiring all we Frogbifs yet again to buy another circular lump of aluminium in order to receive him loud and clear? Let’s face it, we’ve all been on the receiving end of Rupert the Turd Burglar for many a decade.

Seriously, if anyone has info on this development do please let me know: atmospheric conditions are perfect and my monitor picks up all other channels immaculately and without exception. So please don’t tell me I need to cut down trees, evict dragon flies from dishes and other nonsense.

Earlier at The Slog: Further proof that neoliberal economics are bunk