A core member of the Guardian Sisters (Angela Perkins) wrote yesterday of the ‘tragedy’ that is Angela ‘Eddie’ Eagle’s decision not to run against Jeremy Corbyn for the Lieber Ladyship. Perkins insisted that the Eagle had landed with a bellyflop because of Labour’s systemic anti-women outlook on life.

It takes all sorts. More pertinent to Angie’s decision, I would submit, is her poor record on the Iraq war, support for Trident or miltarist intervention generally, and general air of having probably at some time put up signs about nuclear-free lesbian zones in Wallasey during the early 1980s. She does not, let’s get real here, represent anything the traditional Labour voter either likes or wants. She herself said she’d dropped out because she wanted to give Owen Smith (who he?) a “free run” at the man democratically elected by a landslide last year. Shifting her ground from one-eyed feminist to media-savvy pragmatist, Perkins of the Guardian concluded that Labour had missed an open goal:

Ms Perkins is getting on a bit now, but none of her confusion has been dimmed by age. ‘Let’s bring in a woman to signal change’ would also apply to David Cameron’s decision to hire Jewels Altmann. It manages to be dishonest and daft at the same time, but not as potty as suggesting that Clinton ‘inspires respect’ yet is not liked much. Hillary is intensely disliked by genuine radicals because she’s a Wall Street backed militarist hawk with umpteen scandals swirling around her cold-stone head….and because of that, she gets zero respect. The two are hardly mutually exclusive – and they certainly don’t qualify as ‘a difficult gap’ to bridge.

Ms Perkins is another of those symptoms I’ve been banging on about in recent days – you know, the killer disease that is slowly wiping out the Guardian and has already done for the now risible Independent. As long ago as 2011, The Rusbridger Guardianista was losing 9,000 readers a month; it dipped badly again during 2014, and by mid 2015 was losing £45 million a year. This is what it’s been doing over the last 13 years: 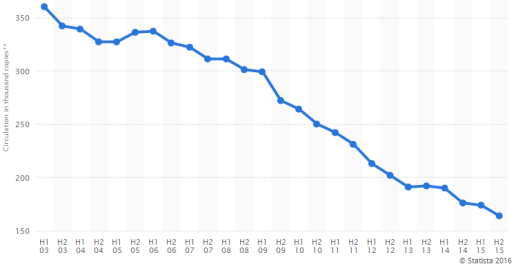 No graphic insight is required to spot the trend: Big G has gone from 357,000 to 165,000 circulation between March 2003 and June 2016. Now of course, all print has declined since digital arrived, but the fact is that (a) the Guardian’s depth of demise is exceeded only  by the New Musical Express and (b) advertising revenue and profile both show that the title is no longer seen as influential.

Politics isn’t meant to be a popularity contest (it just is) but the suicide mission of Rusbridger and those around him has nothing to do with populism, and everything to do with disengagement. The most political paper in Fleet Street bar the Morning Star, the Guardian is rigidly ideological, tediously correct, almost always wrong, and censorious of any and all comments there. “Facts” it avers, “are sacred”….and then proceeds to ignore empirical reality on a daily basis.

Over the last thirty years, “Guardian reader” has caught up “Sun reader” as an insult about the narrowminded, fat-headed nature of the archetypal badge-wearer.

So then, Perkins is a symptom, and The Guardian has the illness that goes with it. The problem for the British decency spectrum is that Labour has the same malady: a neo-fascist level of misplaced faith in fundamental tenets, a determination to go backwards to the comfort blanket, a refusal to admit mistakes, an obsession with dated ideological splits, and – above all – a preference for ‘trendy’ causes at the expense of serious socio-economic concerns currently gripping the average voter.

“The problem is capitalist racism and misogyny, and the answer is Socialism….now, what’s the question?”

I am sorry to be the bearer of obvious factual stats here, but the overwhelming majority of Brits – across gender, class, job and age – think that is complete tosh. The numbers here are so obvious, it seems pointless to quote them….but I’ll do it anyway:

Labour’s problem is not hard to express: its intellectual/ideological ‘activist’ wing is ignoring the unappealing nature of its harder-Left policies and international alliances; whereas the bourgeois ‘metro trendy’ wing is ignoring the apathy felt towards its minority/pc obsessions. Neither wing is even remotely in touch with the mass voter being screwed by censorious neoliberal globalists and fascist corporatism.

Over the last 72 hours – as the Labour Party continued to argue about the arrangement of angels on a pinhead, while over 200,000 UK women pensioners faced imminent destitution – some within This Great Movement of Ours have been putting forward the idea of an alliance with other UK movements. I could say “six years too late is better than never”….but this clearly coordinated media invention is designed to either end a domestic Labour Party tiff….or produce a breakaway. That’s obvious from the choice of Progressive Alliance as the group nomenclature it has awarded itself.

From Alastair Campbell via Liberal Conspiracy and Owen Smith to Ed Miliband and Polly Toynbee, the one thing that binds Labour, the Independent, the Guardian, the New York Times, the Clinton Democratic Party, NATO, Remaindeers and the European Union together is the conviction that only the Big, controlling global perspective on life looks forward to a “better” future…as opposed to the small-minded golf club boors and sadistic badger-gassing Nazi Brexiteers whose vote to Leave has “put everything at risk”.

That umbrella term ‘progressive’: let me tell you what it means to the vast majority of the British electorate. For that mainstream, it means more LGBT tokenism, more feminist obsessions, more denial of EU intolerance, more reversion to comprehensively discredited economic formulae, more unwillingness to engage with utilitarian creativity, more lunatic blamestorming about Brexit….and above all, more policies appealing to counterfeit radicals – but of little or no relevance to those suffering genuine hardship.

Well, I wish the New Progressives well in the restoration of their clapped-out Victorian terrace in Stoke Newington. Intent as they are on splitting a 24% support base into one of at most 16%, their move will serve only to maintain the Parliamentary majority of a corporatist government mildly supported by 28%.

Labour just doesn’t do maths: it fails the exam on long division, and then accuses the examiner of voting fraud. It gets behind the unacceptable dictatorship of the EU, and then accuses the Leave activists of murder. It stands by as a genuine radical outwits them in a leadership election, and then charges its own members £25 to correct their “mistake”. How quickly those who conspire lose the plot.

But here is some maths the Labour Party ignores at its peril: 32% of Brits favour Socialism, and of those, some 4 in 5 are at best equivocal about feminism, only 1 in 2 support the Palestinian cause, a quarter want to leave the EU, and two thirds want to stay in NATO. The idea that a stagnant, ideologically constipated and self-obsessed Parliamentary grouping could on that basis expand beyond its self-created political prison is so daft, only the British Left could believe in it.

Two quarters of the population mildy support the two discredited ideologies of socialism and neololiberal capitalism. A quarter are looking for new ideas in vain, and a quarter have given up voting from a mixture of disgusted cynicism and desperate apathy. If Labour wants to be in majority Office ever again, it must crawl out from inside its own bottom, or descend further into irrelevance.

The real political opportunity from here on is a movement that exists beyond the Whiteminster bubble and works solely for reform of our systems in favour of the common citizen. With or without Labour supporters, it is the only future that makes sense.