For the last fortnight, we’ve all been high on the drug Borichok. But the Chimps’ House Party is to be cleaned up, and the ‘victims’ shuffled off to America under the kind auspices of the CIA. So until otherwise advised, I shall consider the Skripal case closed.  Back on Planet Earth, meanwhile, the epiphany of Crash2 is well under way.

The Sunday Tory, sorry, Times exclusively revealed this morning that Sergei and Yuria Skripal are to be offered new identities in the United States under the protection of the CIA. So just when you were wondering what they’d have to say to the media after having come back from the dead, it’s no longer an issue: mission accomplished….they’re going to disappear off the radar forever. Rather like the Foreign Secretary’s double-agent chum Joseph Misfud. Boris gets the final word in the Digger’s columns, calling Corbyn “one of the Kremlin’s useful idiots”. 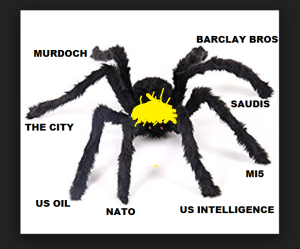 IABATO* – but it’s pointless to continue. If we had a proper Opposition with balls and a proper media set with ethics, I’d be gung-ho to keep going. But we don’t, so let’s move on.

One thing MI5, Boris or indeed even Mario Draghi are going to be unable to hide one day is the collapse of the finacialised global monopolist system. The Sun headline here is ‘Banking recovery with public money while stock markets boom on lower rates under QE and Zirp completed. Now what?’

The “scenario going forward”, as they say inside Goldman Sachs, is that the Fed (gently hinting that the party’s over) is hawkish and high-five to raise rates at least three times during 2018. Just over two weeks ago, the Fed raised rates by a quarter percent. Their next rush of blood to the head is due on 13th June; the way things look at the moment, there is very little reason/excuse/reality available to suggest they couldn’t raise it another quarter.

For those of us swindled variously out of State pensions, bonds and income on our savings since 2010, these look like piddling increases and barely worth a column inch on Page 37. But globalist finance and economics don’t work like that. A half percent increase in the cost of borrowing money to finance more making of money is big bananas. The key factors here are:

There are may other worms ready to escape the kicked can on this one – bank defaults and political deadlock in Italy, dreadful French export figures, a nationwide SNCF strike throughout the summer, Draghi’s minimal wriggle room on banks in Austria and Spain etc ad nauseam – but for my money, the  Five Apocalyptic Horsemen outlined above are the ones that matter. (There used to be only four; that’s inflation for you).

From here on, the things to look for in all news and data that can be trusted (a dwindling universe) are symptoms of opinion-leader nerves. If nothing else, this makes a change from nerve agents; but in predictive terms, it is hugely useful. These are some symptoms I’ve been collecting since last Monday:

Apart from my sore brain, what we see above is the three biggest Anglo-Saxon bourse cities, all with top end property horns being pulled in. That is a flashing light saying high-earning traders and banking firm employees are becoming risk-averse. Furthermore,

QED, as we used to write (more in hope than exectation) at the bottom of equations in maths exams. Then there are the Big Beasts who should know what they’re talking about, on the grounds they’ve made a lot of “money” in the past:

Depressed? You will be, after reading what the specialist media have to say about the outlook:

So: traders, opinion leaders, central bankers and the trade media are all nervous bordering on doom-laden.

Even they, at long last, accept that there are no tools left in the box that is neoliberal monetarism. Now we have to do some thinking outside the box. But Donald Trump, Gary Cohn, Jerome Powell, Theresa May, Jeremy Corbyn, Emmanuel Macron, Jean-Claude Juncker, Mario Draghi and Angela Merkel don’t do ‘outside the box’.

The box may short on tools, but it’s sardine-packed with fools.

So in that context, this is my plan:

Because (a) I am a responsible person (b) I have a history of mental illness and (c) I don’t want any smart-Alec vultures suing me, I must at this juncture point out that I am NOT registered to give financial advice, and nobody reading this post should see any of it as my advice to you or indeed anyone else. I am merely offering information and explaining what I am going to do. What you do is your own concern and nothing to do with me. The value of what I write often goes up and down. The future is no guide to the past. No animals were harmed in the writing of this Slogpost. It was produced in a house consuming nuts. I may contain nuts. Theresa May is very nuts. Lawyers are a plague upon civilisation, allegedly.

*IABATO – Its All Bollocks And That’s Official