With your help, Teck Khong can defeat the élite arrogance that denied Broxtowe its Brexit

The latest Britain Elects tracker poll shows pretty clearly that, as I predicted two days ago, the TBP standing down fiasco has been just as good for Labour as it has for the Tories. Over the recent days of polling, the gains/loss nets out almost exactly at 2.5% of Faragistas going Corby or BoJo. No doubt the daydream believers will herald this as The Labour Surge. The Tories’ lead now stands at 9 points. At the declaration of the election on 29th October, they were, on a poll of polls basis, 11 points ahead.

There is no doubt that Labour is polling strongly in its north of England and London metro heartlands. And there is no doubt that Team Boris couldn’t care less about that, because huge per constituency majorities do not convert into seat gains under our antiquated FPTP system – which (in case you were wondering) Labour wholeheartedly embraces.

The difference between today and 2017 – even though TBP is falling into the same ‘stand aside’ trap now as it did then – is that Momentum’s sanctification of Corbyn is no longer viable. Jezzer himself has been shown up as a man who dithers, gives no support to needy citizens who don’t vote for him, hides his real opinions in exchange for power, and is little more than a front-man pawn in the hands of harder fascists like John McDonnell and Emily Thornberry.

The pollsters make the same mistakes over time. Something like one in six UK voters still ‘don’t know’ which way they’ll vote (this often means they won’t vote at all) but if the big research companies are conducting fous groups among these people, I’m not aware of it.

However, on this particular occasion I think the subterfuge, cynicism, boredom and Brexit analysis overkill will ensure that their votes (if any) will not emigrate overwhelmingly to one camp…..unless, of course, some massive scandal and/or unexpected revelation comes to light.

The likelihood of tactical “cancelling out” is now a very real one: several sites are piling in with technology and in social media to make conflicting recommendations. Unite to Remain’s website, for instance, lets visitors enter their post code and advises on the best way to vote for a party that supports staying in. Brexiteers in turn have an app with similar functions for Leavers paid for by Arron Banks.

The switched allegiance of Arron Banks – and the increasingly obvious geopolitical context of the election – have made it impossible for sites like this one to make tactical voting recommendations without feeling uncomfortable about so doing. I for one have reached a point where I have so little trust in the motivations of those involved, I’ve abandoned all plans to make suggestions.

This year’s American interloper is Hillary Clinton, who continues to lecture Britons on the dangers to democracy here, as if she wasn’t herself one of the biggest threats to democracy Over There.

There is nevertheless one exception to this general picture, and it comes under the heading of the near-stillborn launch here of ‘SAM’ – Send A Message – which at one point was alleged (at least in the blogosphere) to be the sole point of this election.

For those of you with reasonably intact memory synapses, the point of SAM was to target those who had quite deliberately mangled the letters of Parliamentary law to stop Brexit. Like the ubiquitously toxic Gina Miller, they talked a good game about procedure and obedience to the Constitution, while doing their level best to pervert it. The message we were all going to send was now we have the votes to make you pay for this calumny.

But then most of the villains, once Johnson had goaded Swinson and Corbyn into an election, threw in the towel -claiming they wanted to spend more time with their consultancies. At which point, a lot of the impetus got lost.

One such gargoyle was a frequently tired newt called Anna Soubry. Ten days ago, a Westminster backbencher told me Soubry had decided to stand down in her tight marginal constituency of Broxtowe, and so until the day before yesterday I was gaily walking about under the blissful assumption that she was history.

Not only is she standing, but the former Tory MP’s Party ticket has been given to a Remainer by BoJo HQ. This only goes to confirm a canvassing source who told me that “Party HQ is not quite as keen to purge the Blue Meanies as you might imagine”.

What does it say about Boris Johnson’s commitment to Brexit that he is allowing another EU gravy-trainer to stand in one of the closest and most emotional contests in the entire election? What does it tell you about British “democracy” that, in Broxtowe – a place that voted Leave – there’s a choice of three Remainers? How can it be ‘good for Brexit and the country’ that TBP has been forced to stand down there? What is Boris doing….breeding his own rebels?

I suspect this bizarre turn of events suggests very strongly that Johnson (and the genuine Leave camp for that matter) are still a long way from “owning” the Conservative Party. I can do no more than refer you to my earlier comments in relation to trust, motivations and so forth.

All is not, however, lost. Because there is an independent former Kipper candidate standing in Broxtowe. And my question is this: who’s in the mood for a bit of Giant Killing?

The candidate is an exceptionally nice, practical and hugely intelligent Midlands GP called Dr Teck Khong. Many of you will already know him from Twitter, and he has in the past been a regular reader of The Slog.

If ever there was a chance to send a loud message of complete clarity to the self-serving Westminster élite and the unelected corporocratic State, then this is it.

The result in 2017 there was as follows:

In theory, this is an Everest for Dr Khong to climb. But there is real potential in the seat.

First, the LiDems have withdrawn to give Soubry a free run at it, and UKIP aren’t standing. So Teck will be the only solid-gold Brexiteer: his own man, with no hidden billionaires behind him: just a reputation as a GP servicing the bottom 10% of society in his practice.

He therefore has the credentials to attract Labour Brexiteers and former Kippers.

Second, in the 2016 Referendum, around 23,000 citizens of Broxtowe voted to Leave.  Given Soubry’s unstinting efforts to thwart that majority, her vote will, almost inevitably, collapse: and the choice of an unknown lightweight Tory Remainer in the shape of Darren Henry will be seen by that majority as a slap in the face for the ordinary person.

Last but not least, the referendum turnout was low by national standards at 62%. This time – with the result on a knife-edge – we can expect perhaps even more than the 75% who voted in 2017 to turn up….and the vast majority of those people will be angry that the British Establishment expects them to compromise on either Party or national independence in order to cast a vote.

There is but one candidate in Broxtowe if you are a Leaver with a degree of social compassion, a detester of Soubry the not entirely sober egotist, and the owner of an entirely understandable grudge against the grotesque arrogance of the ‘Whiteminster’ Zil laners. 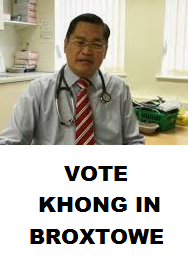