Now’s the time for some broader, joined-up thinking from the decency  spectrum right across the West

I don’t include any of the above characters in such a spectrum. To call them a complex bunch of characters would be a triumph of understatement, but ‘decent’ wouldn’t apply in anything other than a homoaeopathic sense.

The problem is, we have a crisis on our hands, and not enough people at any level in possession of a brain at ease with itself are around to put pressure on them. Barnier clearly hasn’t noticed the UK election result, Macron is just a perverse stooge, and both Trump and Johnson will paddle their personal canoes unti Hell freezes over.

Brexit, NATO, mass migration, Islamist activism, democracy versus corporatocracy, liberal versus traditional and neoliberal versus collectivist are events and belief systems that have split the West asunder during the 21st century. 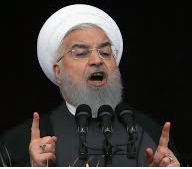 It would be a naif indeed who thought Hassan Rouhani (left) the Iranian President to be either just another extreme cleric or an innocent bystander taken by surprise in this ‘sudden’ escalation. He is a talented lawyer and a lifetime student of the diplomatic black arts.

Equally, although Trump (and those who try to manipulate him) may well have reacted to “intelligence” they had received about Iranian intentions, the level of that reaction played into Rouhani’s hands.

But cool heads will be in no doubt at all about certain – for me anyway – well-established facts:

Put all this together – the West on the verge of a major debt crisis, Trump facing impeachment, the EU facing the loss of a hugely valuable member, rows between US and EU NATO, a Britain increasingly divided on the issue of radical Islam, rows within the EU about mass migration, a British PM new in the job and known to be (shall we say) ‘hasty of mouth’ and a French President under siege for being ‘trop Anglo-Saxon – and to a trained terrorist diplomat like Rouhani, it does look like a golden opportunity to take advantage….to strike, if not while the iron is hot, then certainly while it is pretty badly bent out of shape.

If you’re looking for a hero in any of this, forget it. Iran is the 5th biggest oil producer in the world, with proven crude oil resources of approximately 10% of the world’s proven finds.

Like myself, President Trump never believed the Iran nuclear development was innocent, nor did he have any faith in Obama’s ‘deal’ to make it so. Predictably – because this is what the US State does – the Iranian ability to export oil and have easy access to the petrodollar system has been severely affected by Trump’s imposition of sanctions in the country after Rouhani’s adverse reaction to the White House tearing up the Obama deal during 2018.

The sanctions have contributed to global oil price rises (although much of those are blatant directionalising) and caused a flight of from foreign investment in Iran’s oil sector.

So Rouhani has been under pressure; and lest we forget, it was US exclusion of the régime from the petrodollar system that brought Iran to the negotiating table in the first place. But a major conflict breaking out between this mutual hate society would be more than enough to tip an already beleaguered global economy into all-out crisis.

In short, there’s a lot at stake. And so not surprisingly, EU leaders are urging restraint. That’s a bit rich coming from gungho Syria-bomber Boy King Macron of France and a UK that joined in on the party…..but then, the stakes are much higher now.

The Leftlib Remainer fluffies will, I appreciate, find it hard to grasp the commercial and geopolitical dimension here, but restricted access to four billion barrels of oil a day does matter: for a greedy consumer and non-producer like the EU, it’d be a fiscal disaster to inflate the Brexit damage many times over….and leave them open to increased dependence on Russian oil. This is a subject about which Frau Doktor Merkel knows almost as much about as sausages.

If you think Michel Barnier isn’t weighing all this up, then I suggest you climb back onto your Christmas tree.

As usual, geopolitical chess champion Vladimir Putin (left, seen with Rouhani last year) has been the only one involved so far to react in a calm manner bordering on nothing. Although Russian Foreign Ministry Spokeswoman Maria Zakharova told a press conference that “the killing of a representative of a government of a sovereign state is completely devoid of any legal basis”, the  Moscow Times observed that, “It is doubtful that Moscow will make any radical changes to her policy of not supplying Tehran with offensive weapons.”

Vlad the Lad knows he doesn’t have to do anything; he just needs to wait and watch. If Trump escalates to a broader and harder military reaction, it seems highly unlikely that even Britain will back him – and Berlin and Paris definitely won’t. It would be the most major split in the long history of the NATO alliance – and perhaps do permanent damage to the “Special” Relationship….including our much-vaunted trade deal with Washington post Brexit .

By doing nothing, Putin gets a split Euroalliance, a religious extremism he detests in conflict with the most powerful nation in the world, an isolated America, and higher prices for his oil.

As Britain accelerated contingency plans to evacuate both military personnel and civilians from Iraq, Trump and the Mullahs competed with each other on Twitter, apparently unaware of the profoundly dangerous nature of the threats they threw back and forth. The Donald’s last effort vowed that “These Media Posts will serve as notification to the United States Congress that should Iran strike any US person or target, the United States will quickly and fully strike back, and perhaps in a disproportionate manner” – a bizarre promise to do something reckless that is the silliest message I’ve seen since Kruschev’s drunken tirade during the Cuban missiles crisis of 1962.

Rouhani then upped the ante on the President’s  ’52 targets in Iran’ jibe by overtly threatening 290 US and allied targets in Iraq “and wherever our forces may strike”. Javad Mohammad Zarif, Iran’s foreign minister, confirmed that Tehran was resuming all aspects of its nuclear programme “in response to the killing” adding, “Do you still want to listen to the clowns advising you on our region?”. The second part sounded like good advice to me; the first part is disingenuous, given the ample intelligence suggesting that Iran never stopped its nuclear weapons development, but merely moved it (literally) underground to another place.

And therein lies the real problem with Britain (or any country for that matter) engaging in blocist alliances with superpowers and other groups. We need to get real, and very quickly. None of us know who is really pushing the buttons in the US Administration. Only a tiny minority of Brits grasp that the UK is largely run by a dangerously dictatorial blocist alliance of FCO, Home Office and intelligence service mandarins captained by Sir Mark Sedwill and answerable to nobody. At least 48% of our population has no concept whatsoever of how antidemocratic, corrupt, indebted, illiquid and insanely federalist the German, Brussels and French bigwigs in the European Union are.

Consider the waves from this macho US unelected State obsession with an energy form it should’ve developed beyond decades ago. They go on and on.

The soft-pedalling on Islamist atrocities in the UK will continue – and get softer still – as our dependence on the Saudis for oil imports and weapons exports increases.

Look at today’s date: the 7th of January 2020. We are supposed to be leaving the EU in 24 days. Is anyone aware of any discussions between the two sides? Does anyone seriously imagine that the Iran/US bunfight won’t get in the way of that process? Is even one single Brit in doubt that Brussels will once more use all the mayhem as an excuse to drag their feet of clay still further?

The already yawning socio-political chasm between the neoconic greedy and the ID narcissists in the UK and US will become a Grand Canyon of divisiveness.

The flags below have always summed up my position. Perhaps now, at last, more people will understand why. 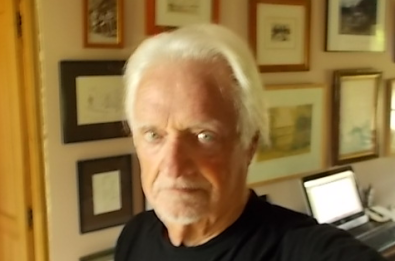