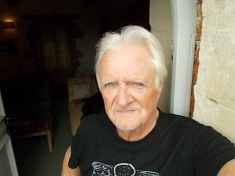 As the gap between Covid19 reality and élite Plague fantasy yawns ever wider, the 3% are hard at work putting illiberal Crash2 unaccountability into place. The Slog investigates and analyses the use of fear & distraction, offering a comprehensive debunking

Italians send all Chinese testing kits back as “useless”

US reports of ‘troop movements everywhere’

There is an excellent page at the Worldometer site, called Coronavirusupdatelive, that I’ve been monitoring for a while. So far I have failed to find any agenda there, but you never know. This is yesterday’s output: 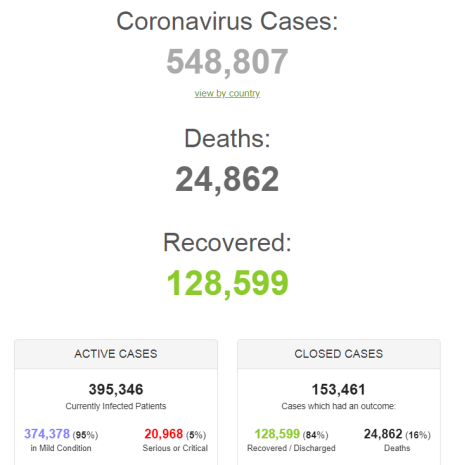 First rule of media stats: the smaller the print, the more insights it offers. Always drill down.

Bottom left, 95% of cases are mild. So even though the headline death rate looks bad at 4.53%, around (say) 50% of the infected don’t “present” to the authorites: that is, they stay in bed listening to the battleaxe telling them they’ve got Man Flu.

That number is a guesstimate and will always remain so, because there are too many unknowns in the equation. But if you take 95% and divide it by 2, then 47.5% more cases than recorded comes to 807,746.

And that delivers a death-rate of 3.1%. BUT long series data on those aged 60+ suggest that demographic is 8 times more likely to produce fatalities….so that gives all those in the sixth decade or under a 0.38% likelihood of dying….as near as damn it to the 0.4% level The Slog has been applying since late February.

That in turn reflects a stable number, and thus allows for a high degree of confidence in the real level of danger here.

So the next time you read a slipshod hack’s upside-down ‘verdict’ on COVID19, fake tweets about surges or of yet more stringent lockdown rules and Macron talking about World War III, just keep going back to the Worldometer.

And either continue (or start) to wonder what the bigger agenda might be in this, possibly the greatest con since Hitler’s “Diaries”.

Both Boris Johnson and Prince Charles have got the Dreaded Lurgi. No further comment is necessary.

Thursday night, I posted this about President Macron of France:

‘For the time being, he is basking in the media praise for his “decisive actions” but I doubt if this will last. He’s pledging massive investment in the Health System, yesterday saying “Once this crisis is over, a massive investment plan and an upgrade of the career paths will be put in place for our hospital system”.’

Yesterday, a new poll, conducted by Elabe-Berger Levrault for the 24-hour news channel BFM-TV, found 56% of French people think the health crisis is being “poorly managed” by President Macron’s government, and 52% said they “don’t trust” the government to do what is right to combat the outbreak.

So, just two weeks into Emergency Powers, both the means and motives of the Boy King are under serious scrutiny. And that’s firmly backed up by a separate poll from Kantar for Le Figaro that found only one third of the French think public services in their country are prepared to cope with the epidemic and its consequences.

But still very few people doubt that COVID19 is the “raging, surging, killer virus” we keep being told it is. However, they are at least catching on to one reality: that draconian action is focused more on saving reputations than building herd immunity.

In the UK, the public opinion is markedly different: 61% think the Government is taking the coronavirus crisis seriously enough, and a staggering 87% think the public is underrating the need to take it more seriously. This is what we market researchers call projection – that is, 9 out of 10 think 10 out of 10 are being silly….but not them. It’s always as well to remember, when encountering the citizen at large, that 10 out of 10 of these wazzocks have the vote.

It gets worse, I’m afraid: despite strong BoJo counsel, 6 out of 10 of those 9 out of 10 were themselves away from home for at least part of the time the day before.

Over half of Brits (52%) believe the disease is going to kill millions and millions of people worldwide (which it may do) but 6% expect it to kill hundreds of millions. Most of these latter loons, from what I’ve observed so far, appear to be dominating the social media narrative.

There is no sign at all, however, that any of then grasp how fully 96% of victims will be at or past retirement age, and around 25-35% would’ve died of something else anyway.

The bottom line of the foregoing reality is that most people are divorced from reality, rarely engage the brain before giving an opinion, and in this instance continue to see the pandemic as at least ten times more serious than it is likely to prove.

That in turn explains why (a) COVID19 fear-mongering has been so successful, and (b) very few people have turned to wondering why it is necessary to trash the world economy in order to deal with something relatively mundane.

We are I think (at last) at the core of Planet Panic here. But as ever, I remain unconvinced by most simplistic conspiracy analyses.

As ever, the question is one of information provenance. In a world where everything said “officially” needs to be microscopically examined, there is going to be a hierarchy of spin agendas, potential psyop motives and sovereign propaganda.

COVID19 may have been blamed on several people and things; but it has benefited dozens of causes. So it’s especially tricky.

WHAT DO THE LATEST GOVERNMENT MOVES TELL US?

There have been some disturbing further developments in the last two days.

In the UK, Boris Johnson yesterday announced that his Government is to, effectively by decree, suspend the UK housing market. Following the two cuts in Bank of England rates last week, this is the latest (and first specific) move to use COVID19 “chaos” to rationalise financial policy. A collapse in the British (primarily English southern) housing price sector following further FTSE falls would be, to say the least, destabilising; this decision effectively rules out a hugely negative sign for the UK economy. (The UK has the most heavily financial services biased, property-owning economy in the First World)

Once again, it seems impossible to decouple COVID19 from Crash2. This was hammered home during the day when it emerged that the Government is basically dealing with a banking credit crunch: several banks were reneging on mortgage offers, and the move to suspend followed direct lobbying from at least four banks.

The banks “expressed concern about the impact of the pandemic on valuations”, but senior sources in the sector confirmed their private concern about “granting credit when the economy is in freefall”. Showings have been stopped on the grounds of “damaging effects on social distancing”, but it is clear that, behind the scenes, UK bankers share The Slog’s view that there are likely to be further and deeper FTSE corrections. This in turn has a direct negative effect on SE and London property prices, with so many upmarket homes housing City workers.

The news was immediately overshadowed by the announcement that British Prime Minister Boris Johnson had tested positive for COVID19 – as has Health Secretary Matt Hancock.

Across the Atlantic, on Thursday the New York Fed Reserve muscled in on the allegedly COVID19 Stimulus Bill (supposed to help US workless citizens) to spray yet more billions of Dollars onto Wall Street banks. The text of the eventual Bill was described by website Wall Street on Parade as ‘breathtaking in the breadth of new powers it bestowed on the Federal Reserve, including the Fed’s ability to conduct secret meetings with no minutes provided to the American people”.

It allocates without accountability half a trillion Dollars to be available to make loans and loan guarantees to, and other investments in, programs or facilities established by the Board of Governors of the Federal Reserve System for the purpose of providing liquidity to the financial system.’

Effectively, the bill is a bailout for Wall Street and globalist business. But again, it’s being undertaken using the cover of ‘stimulus to alleviate the short-term effects of COVID19 on the economy’.

More generally, the MSM has continued at its daily work of describing the normal, projected progress of the virus in terms of leaps, surges, doublings, soarings and exaggeration. CNN, for example, last night used the phrase “Thousands dead in France” when the figure is actually one thousand. Most notable was a disgraceful piece in The Sun by the little-known moron Tariq Tahir, headlined

The story was immediately picked up around the world and now has some 307 repetitions on Google. It is drivel from end to end. Our Tariq corrected himself three lines in with ‘between three and 14 per cent’, then diluted it further with ‘between three and 10 per cent’ and then finally gave the real figure – 3.1%. In all then, a 430% exaggeration – and, as it happens – a non-story:

And people ask why I loathe and despise everything News International stands  for. Rupert Murdoch is a piece of cultural antimatter mainly designed to effect easy exit from the human anus.

The short conclusion to this post is as follows: the mainstream media continue to alarm people when there is more than enough unease as it is; and COVID19 continues to be a globalist/central banker/bourse Patsy for business, and a largely inexcusable excuse for the likes of ex-banker Macron, City fan Boris Johnson and the US Federal Reserve to take astonishingly unaccountable powers to increase the unease still further….and make the “sell” of econo-monetary collapse that much easier.

Two further points: rumours continue to reach me that BoJo adopted the containment strategy of the Madhouse under extreme duress….from Sir Mark Sedwill. And Dominic Cummings is lying very low.

I continue to be pessimistic about the outlook for our freedoms.