….DURING 90 DAYS OF COVID19 LOCKDOWN STUPIDITY

How insanely shameful is that?

According to the lastest ONS stats, Covid19 lockdown has cost the UK a 24.5% hole in gdp.That’s about £550 billion.
The DWP itself estimated in June this year that the cost of keeping the State’s original promise of pensions for 50s born women would be £215 billion…..which is over a period of twenty years – not three months.
So this Government has blown 122 times more money per day on a minutely threatening, 99.1% mild virus than on baling out 3.5m women it left in the lurch.

If and when the Appeal decision goes against the Fifties women, all Backto60/Waspi and similar organisations should remember that number: that’s how little the British State values you. It will stand in history forever as a cretinous, evil, level of thoughtless incompetence….compounded by the pathetic failure of the State to protect the truly vulnerable over 60s in care homes and similar squalor.

France’s scientific council has warned that the country “risks losing control of” the Covid19 virus. Over the last three days, there have been 28 deaths from Covid19 in France. Yesterday there were 2, the day before, 3.

France is not losing control of C19: it’s merely testing more people, but the increase is in reported cases. 99.1% of all Covid cases are mild, and the American Medical Association estimates that some 46% are not reported at all.

But France is losing control of retail price inflation. Over the last three weeks I have spoken to a full cross-section of trade buyers, consumers, service providers and retail outlets….if only to confirm the evidence of my own eyes. Everyone supplying the public in physical distribution and sales has been putting prices up across the piece.

The compound declared inflation rate (no official numbers as yet) is bandied about at around 3.8-4.0%..but this is a risible fiction: retailers are frantically marking up in a bid to regain the cash flow they have lost. Gardening products, garden furniture, decorations, DIY, beer, wine, packaged foods….the list is endless. However split views are in this society on other matters, there is unanimity that evryday and small durable price inflation is running at between 12-18%.

The recovery models are flakey, the Brussels ‘aid’ propaganda mendacious, the news fake, the stats manipulated and the data outputfaked. They have been for 30 years, but this time there really are four fingers on display in Room 101: Winston Smith can be distracted for only so long.

During the last lockdown, the EU lost €9 trillion in gdp. The total EU recovery fund is 0.72 trillion….a reed plucked from the Brussels bullrushes to try and save a drowning elephant.

Of the seven pillars of EU banking, 5 are showing billions in losses, and Italy & Greece have non-performing local govt, personal and corporate loans running at 34 and 42% respectively.

Be under no illusions here: the European Union is heading for catastrophe unless people involved in social activism and anti-Globalist Coronavirus madness grab the levers of power from the scorched Earth fanatics in Brussels and the Elysées.

Cheated pensioners, the unemployed, the bankrupt – and the rest of us who are awake – have, in the current outlook, very little to look forward to or laugh about.

We’re probably about three months from the stage where the Game Changers hope we gradually accept our submission to their bad science. But by then, two things will have changed, and two more might have done:
1. The economic cost of Contrick19 will be clear
2. The US Presidential Election will have declared
3. Britain’s true Brexit position might be clearer
4. The Covid19 mask may have decisively slipped.

In the meantime, it is still important for everyone to ease the stress of our unfortunate life and times by laughing – preferably out loud. So here’s some surreality risibly close to the Truth….

Joe Biden told the media last May that he’d announce his running mate in the first week in August. Unfortunately, Biden first of all forgot about the promise, and then forgot who he’d chosen. Now he’s forgotten who he is. His media trainers are working on the problem.

Pizza Express has been put up for sale after agreeing a restructuring with its bondholders that will result in a much reduced menu. New lines will include the Borisoni Guiseppe Sloppy Quattro Cheesy with added Covid Dough-free Balls, American Fauci Corona Vaccioni, and the classic Salata Tricolore Didier HCQ (Hotchilli, Capers, Quinine) with a side order of Zinc. Neil Ferguson has predicted that unless total lockdown is reassembled immediately, every Italian restaurant in London will die.

Following the Negroid Nazi Black Lives Matter IRA-style march through Brixton at the weekend, the BLM UK team have finally defined what they want in terms of justice. Their leader Entebbe Trotgabe says there “will be no peace” until David Lammy becomes First in Line to inherit the democratically elected Sovereignty of Jeremy Corbyn as Supreme but Humble Emperor of the soon-to-be-renamed EU Regional Comintern of Antifanarchy; Boris Johnson’s son Wilfred has been sold into Eritrurian slavery; Bob Marley is reincarnated under the direction of Peter Horby; and all CDs are dumped in favour of 8-track and vinyl.

And finally (as they used to say on News at Ten) Satellite observations have found a raft of new Emperor penguin breeding sites in the Antarctic, lifting their global population by 5-10%, to perhaps as many as 278,500 breeding pairs. Climate Change models have projected that the animals’ numbers will be hit hard, suggesting that 50% will die by 2100. Or put another way, the model (with 80% of the century to go) is already 60% out. Speaking from his secret nest in Gotham City, their leader had this to say: 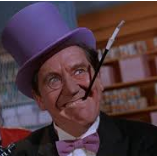