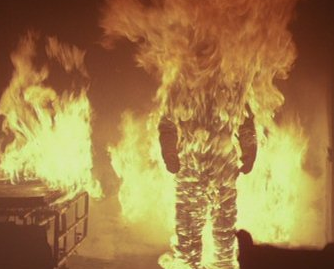 Fireman Sam, the Koran & an invented insult that threatens our liberties

Before we start today, I’d just like to remind you of the masthead copy at The Slog:

The key word above there – one of the four dangerous ideologies I identify – is Islamism. Islamism did not exist as a word until 9/11: at that time there was one word to describe Muslim culture and beliefs – Islamic. Muslim leaders have tried very hard in the 21st century to make a distinction between Islamist jihadism and Islam. The questions to ask about the Fireman Sam incident, however, are more general. They concern tolerance and appeasement in a liberal ‘democratic’ society.

Fireman Sam has been revived by Channel Five and their supplier HIT productions. In one episode, a character called Elvis – whose role is well-established as being something of an idiot – accidentally stands on a page of the Koran…which is not identified as a page from the Koran in the script.

The episode has been withdrawn after “complaints” were made to Channel 5. Both Channel 5 and HIT have apologised unreservedly.

Allegedly, the bloke who “wrote” the Fireman Sam episode has issues with what he sees as Islamic intolerance

What we haven’t been told by the media

The real facts that matter

Having devoted several early hours today to the history of this “outrage”, it is clear to me that only Islamics themselves complained about the depiction (for half a second) of one page of the Koran under a fireman’s boot.

Without doubt, an early oxygenator was the news website Middle East Eye. Fireman Sam doesn’t run anywhere in the Middle East, so someone must have pointed out the heinous insults of the satanic Infidel. This is a capture of the MEE article’s headline:

The piece was filed by journalist Alex Macdonald at 16:03  UTC yesterday. He updated it at 20:21 the same day. It’s a self-fulfilling headline typical of the tabloid agitprop style: there was no controversy, “blazing” or otherwise. The headline itself, however, is extremely inflammatory.

If you go to his Twitter page @AlexJayMac you can judge for yourself what Alex is about. He makes no secret of it, which is commendable compared to the antics of most hidden persuaders these days. But they guy clearly has a pro-Islam Left agenda.

Alex omits to tell us who complained, when and how. I would’ve thought that would be central for a genuinely investigative journalist, but there you go: he writes only, ‘Middle East Eye attempted to verify the clip on the My5 website, but the episode was no longer available’.

So Macdonald himself isn’t the pinched-goblin script raker general who spotted the 0.5 second incident. But here are some further clues:

Right. So the MEE headline should’ve read Muslim controversy then. It was nobody else’s: I was using Twitter actively from 3 pm until 6 pm and saw neither tweet nor trend.

Mr Kesvani writes for Huffington Post, the Guardian and other predictable suspects. His blog is about what a pain in the arse it is being a Muslim in Britain.

But this chap looks more likely: 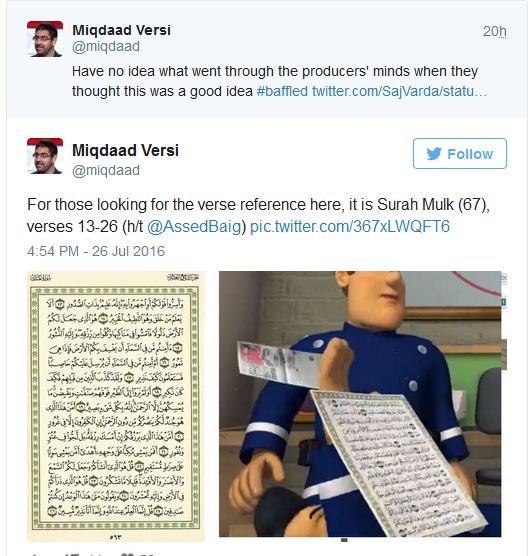 Taking into account the fact that UTC is an hour behind BST, we can work out that Mr Versi tweeted first of all late Monday night. Then once the ball was rolling and MEE’s Macdonald had picked up the ‘story’, he added the second bit about the exact page.

Miqdaad Versi used a clip from the episode, but it had been withdrawn before then. So his complaint goes back aways.

The UK’s Muslim Council has form when it comes to repressive use of perceived media insults about the Prophet, the Koran, pub signs with pigs on them and any other form of the victimisation it sees everywhere in Britain.

In 2004, a close friend then at Channel Four was in charge of the station’s educational output. The Council’s Iqban Sacranie rang the station to complain about ‘misrepresentation’ in part of her output on religion, and demanded more time be devoted to Islam. The producer told him to fuck off. Sacranie then rang a senior executive at c4 and threatened the station with organised demonstrations. He went straight to the news desk and ran the story. Sacranie did not come out of it very well.

The Council also spearheaded the attempt to get Tony Blair to ban all criticism of Islam “whether it was true ot not”. The Labour Left was all for it, and Blair was about to endorse this clear attempt to stifle free speech when Islamists bombed London killing 56 people. That was the end of that. It took Sacranie nine days to grudgingly condemn the attacks.

This is not generalised bigotry or racism, it is about a growing body of empirical evidence showing quite clearly that that Islam’s leaders in Britain demand a privileged position for themselves on almost every dimension….and ‘ic’ leaders are not averse to using ‘ist’ threats while at the same time disassociating themselves from the latter’s history of unparalleled violence and extremism across the globe.

Within hours of the story going mainstream, both Channel Five and HIT fell over themselves to accept every objection made about the Fireman Sam episode. C5’s prostration was truly remarkable:

‘The page was intended to show illegible text and we deeply regret this error. We sincerely apologise for any distress or offense it may have caused.

‘We will no longer be working with the animation studio responsible for this mistake.

‘In addition, we are taking immediate action to remove this episode from circulation and we are reviewing our content production procedures to ensure this never happens again.

‘Again, we apologise unreservedly to our viewers.’

Any thinking person must now ask why this appeasement happens in 2016, but didn’t in 2004. Common sense – and my own corporate experience – provide the simple answer: people are afraid of becoming the next Charlie Hebdo incident.
So here too, the ic/ist differentiation is once again seen to be a hypocritical confection. If a programme supplier gets fired and an episode of somebody’s carefully crafted work trashed on the basis of the deliberate attempt to make a burning mosque out of a scarcely visible molehill, then freedom of speech is under threat. Such is, as always, the wages of appeasement.

About the Sam creator’s motives

David Jones, the creator or Fireman Sam, was involved in an incident at Gatwick airport some years ago. Speaking to Radio 4’s Today programme after the event, he recalled how he said to aiport officials after a veiled Muslim woman wasn’t searched at security:

“I wonder what would happen if I covered my face with my scarf. It was a quip. And I expected the guy to say: ‘Yeah, I know what you mean mate’ but when I got to the end and was putting all my stuff back on, I was bagged by a security guard. He told me I had made a remark which someone found offensive”.

He was led away and lectured for a bit.

Now Alex Macdonald at MEE makes great play of this – the inference being that it’s a smoking gun. Personally, I am horrified by the alleged act of heavy-handed pc repression by the security people….but let that lie.

The fact is that Jones had nothing to do with the episode concerned, ‘Troubled Waters’: it was written entirely by Miranda Larson. Miranda writes, directs and develops concepts for children’s theatre and television. She has no associations with or adherence to extremist politics of any kind.

How to stop this creeping propaganda

Yesterday at The Slog: The real f***ing d***head in the Prince George story